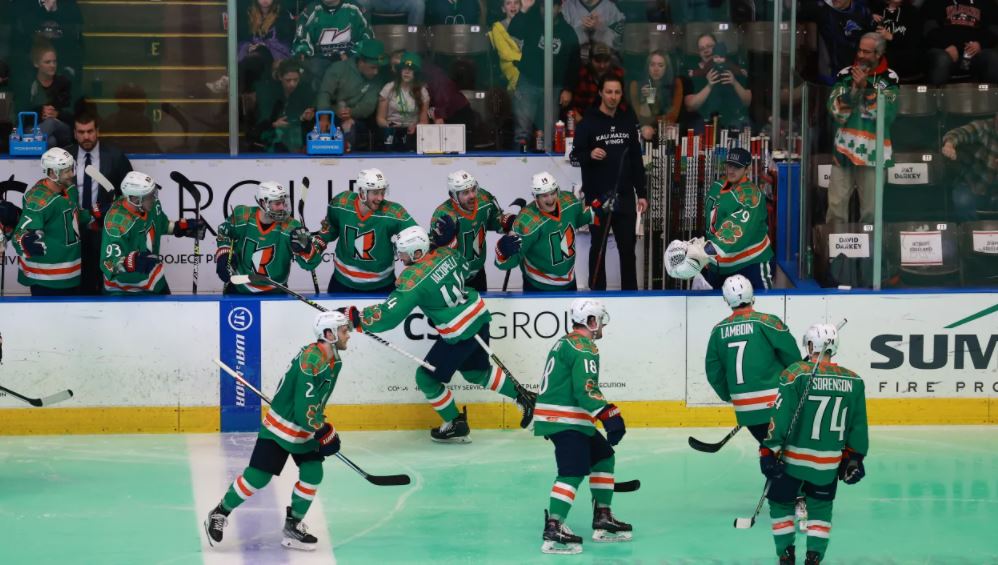 Twice Iowa took one-goal leads in the first period, only to see the Wings battle back to tie the score each time.

KALAMAZOO, MI – Matheson Iacopelli scored a hat trick to lead the Kalamazoo Wings to a 5-4 victory over the Iowa Heartlanders. Twice Iowa took one-goal leads in the first period, only to see the Wings battle back to tie the score each time. Kalamazoo took the lead for good in the second with two goals. Zach White had two goals and two assists and Ryan Kuffner had three assists for Iowa. The loss snapped the Heartlanders’ two-game winning streak.

White gave his team the lead 6:10 into the contest. After Hunter Jones made a great save on a point-blank attempt, Kuffner gained control of the puck, passing it into the neutral zone to send White on a breakaway. He beat Trevor Gorsuch with a nice backhand move for his 13th goal of the year.

The lead held for a little over four minutes before Iacopelli scored his first goal of the night. Logan Lambdin passed the puck to Iacopelli at the left faceoff circle. He swept across the slot, using a screen to block Jones before putting a backhand attempt over the glove of the Heartlanders netminder for his 12th goal of the season.

The sellout crowd was on their feet following the goal, but Kris Bennett took away the energy, scoring 23 seconds later. Bennett carried the puck into the Kalamazoo zone along the left boards. He opted to shoot, lifting a wrist shot that beat Gorsuch to make it 2-1. That was the 28th goal of the season for Bennett.

Iacopelli tied the score with just over five minutes left in the period on a goal reminiscent of his first tally. Lambdin stole the puck inside the Iowa end, passing it to Iacopelli near the left faceoff circle. Once again, he swept across the slot, beating Jones with a backhander over the glove to tie the score at two.

Iacopelli gave his team the lead 55 seconds into the second frame. With the faceoff inside the Iowa end, Kyle Blaney won the draw back to Iacopelli who fired a quick wrist shot that Jones never saw for his third goal of the game, bringing a shower of hats down onto the ice.

This time it was Iowa who needed to play a little catchup and they would, tying the score just after the five-minute mark. Bennett had control of the puck, moving down the slot just inside the left faceoff circle. He quickly pivoted, finding White moving down the opposite side of the slot. White took the feed and beat Gorsuch with a wrist shot for his second goal of the contest.

Kalamazoo took the lead for good at 10:14. Tanner Sorenson deflected a pass attempt inside his own zone, gained control, then quickly fed it into the neutral zone, sending Jake Slaker the other way on a breakaway. He moved in to about six feet from Jones before lifting a wrist shot past the blocker of Iowa goaltender for his 11th goal of the year.

The one-goal lead held through the second intermission, but Kalamazoo made it a two-goal advantage 6:57 into the third. Blaney lifted a shot toward the net that Jones saved, but the rebound hit off Lambdin, who was crashing the net, and went in to make it 5-3. For Lambdin, it was his 23rd goal of the year.

Iowa cut their deficit to one almost exactly two minutes later. With the Heartlanders on the power-play, White passed the puck to Jake Smith at the left faceoff circle. He blasted a one-timer past Gorsuch for his 20th tally of the year.

These two teams will lace up the skates again on Saturday evening. The puck drops at 6:00.