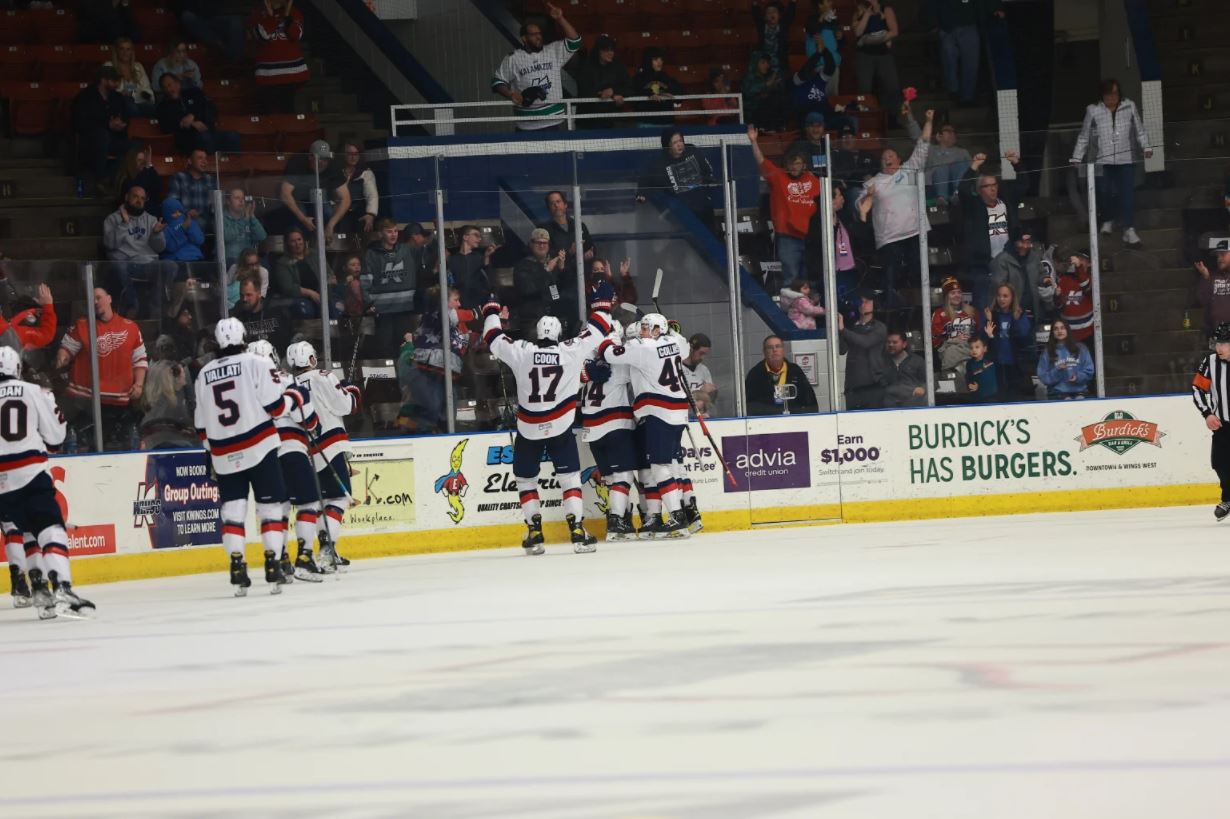 KALAMAZOO, MI – On Wednesday evening, Matheson Iacopelli scored 2:23 into overtime to give the Kalamazoo Wings a 4-3 skate-off win over the Iowa Heartlanders. That ruined a potential comeback win for Iowa, as Kaid Oliver had scored with a little under eight minutes left in the contest to force the extra session, but the Heartlanders could not earn the extra point. Oliver and Kris Bennett each had a goal and an assist for Iowa. Iacopelli finished with two goals for Kalamazoo.

This game was scoreless through the first 13-minutes of the contest, but tallies by Bennett and Fedor Gordeev in the final seven minutes of the frame gave Iowa a 2-0 lead heading to the first intermission. Bennett lit the lamp at 13:14, scoring his 33rd goal of the season with the team on the power-play. Yuki Miura moved along the right half-boards, passing the puck to Oliver in the slot. He simply made a one-touch pass to Bennett, who was moving down the slot toward the far post. Bennett lifted a wrist shot by Trevor Gorsuch to make it 1-0 for Iowa.

With 1:10 left in the frame, Gordeev made it a two-goal Iowa advantage. With the teams playing 4-on-4, Gordeev waited for a screen to develop in front of Gorsuch before taking a wrist shot that beat the netminder over the glove side for his fifth goal of the year.

The Heartlanders had dominated the first period for the most part, holding the two-goal advantage and outshooting the Wings 15-10. However, in the second, Kalamazoo was able to tilt the ice in their favor, scoring three goals on 14 shots to come out of the period on top by a goal.

Justin Taylor got things going for Kalamazoo at 9:25, cutting the Wings deficit in half with his 22nd goal of the season. With the faceoff inside the Iowa end, Taylor won the draw back to Zach Jordan, who fired a shot that Heartlanders netminder Corbin Kaczperski saved. However, Taylor went right for the net and was able to swat the rebound past Kaczperski to make it 2-1.

At the 11:11 mark, Iacopelli tied the score with his 18th goal of the year. Kalamazoo was on the power-play when Kyle Blaney passed the puck from just below the left faceoff circle across the slot to Iacopelli, who was inside the right faceoff dot. He lifted a wrist shot that sailed into the upper corner to tie the score at two.

The Wings continued to buzz around Kaczperski and took the lead with 63 seconds left in the period. The Wings’ forecheck was making it impossible to get the puck out of their zone. Eventually, Taylor was able to steal the puck, making a quick pass across the crease to Max Humitz, who redirected the puck past the Iowa goaltender. Suddenly, Kalamazoo had come all the way back to take the lead.

The Heartlanders had seen their two-goal advantage erased but ramped up the pressure in the third period and were able to tie the score. Just after the 12-minute mark, the Wings were on a delayed penalty. Iowa quickly sent out the extra attacker, but before he ever had a chance to get into the play, Cole Stallard made a great pass to the front of the net, where Oliver tipped the puck past Gorsuch to tie the score at three.

That sent the game to overtime, where Iacopelli won it for Kalamazoo. Moments after Gorsuch made a great save on a partial breakaway, the Wings went back the other way on a rush. After setting up in the Iowa zone, Olivier LeBlanc passed the puck back to Iacopelli at the point, who sent a blistering wrist shot past Kaczperski with the game-winner.

The victory keeps Kalamazoo in fourth place (33-29-1) in the Central Division. Iowa drops to 27-27-9. The Heartlanders will continue their four-game road trip, heading to Cincinnati to take on the Cyclones for two games starting on Friday evening. The puck drops at 6:05 Iowa time.