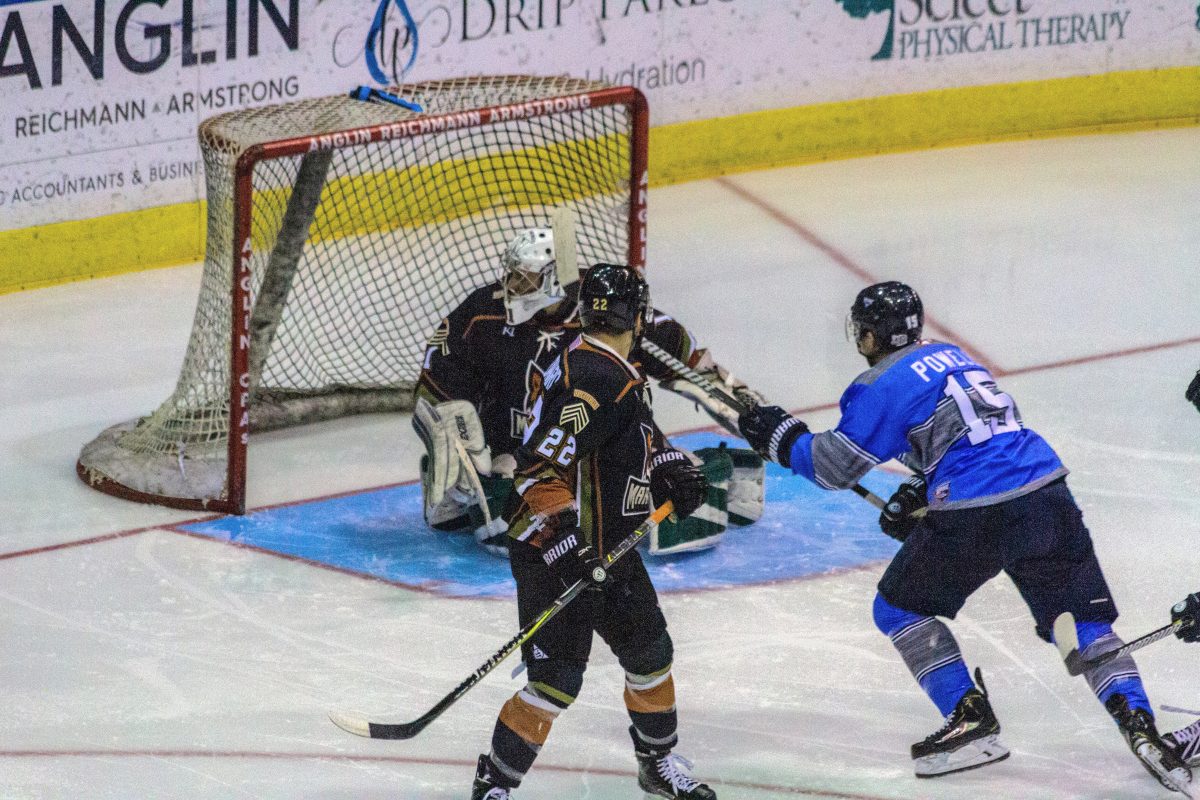 PENSACOLA, Fla. – The Pensacola Ice Flyers put on a dominant performance against one of the top teams in the Southern Professional Hockey League on Sunday afternoon.

PENSACOLA, Fla. – The Pensacola Ice Flyers put on a dominant performance against one of the top teams in the Southern Professional Hockey League on Sunday afternoon, even if the scoreboard didn’t reflect it in the team’s 4-3 overtime loss to the Fayetteville Marksmen.
It was clear throughout its entirety that the game was the third time the teams had faced each other in less than 72 hours. Right from the first whistle, there was chirping and shoving, but the first period was also full of sloppy play and missed passes. Despite the choppy nature, both teams managed to get a decent number of chances. The Ice Flyers seemed to get most of the quality chances, but Fayetteville’s Blake Wojtala was up to the challenge, stopping all 18 of Pensacola’s shots.
The Ice Flyers started the second period on a power play after Fayetteville’s Nick Le Sage was called for unsportsmanlike conduct at the end of the first. A shot from the bottom of the right circle was redirected into the net by Tommaso Bucci for a power play goal just 1:28 into the second. Connor Powell and Meirs Moore had the helpers on Bucci’s 13th goal of the season.
About a minute and a half later, Le Sage once again found himself in the penalty box after a blatant cross-check did not go unnoticed. Powell gave the Ice Flyers the 2-0 lead and netted his third goal in two games when he one-timed a pass from the right circle. Moore picked up his second assist of the night, the other assist going to Joseph Drapluk.
Just under four minutes after Powell’s goal, Fayetteville got on the board thanks to Stathis Soumelidis with 11:30 left in the second. The second period continued back and forth for just under 10 minutes when former Ice Flyers forward Brian Bowen cleaned up a rebound and put the puck past Stephen Klein with 1:45 remaining in the period.
Moore regained the lead for the Ice Flyers just nine seconds into the third period. Bucci won the faceoff back to Moore, who then flew up the ice and ripped a quick shot from the top of the slot. Bowen once again had a hand in tying the game when he assisted on Fayetteville’s third goal by another former Pensacola forward, John Gustafsson.
Tied after regulation, the game headed to overtime where the teams traded breakaways and chances. The Ice Flyers found themselves on the wrong end of an overtime penalty when Ryan Marcuz was called for holding the stick 2:20 into the extra frame. Both he and the Fayetteville player he was battling were clutching and grabbing, fighting for a puck. Both had a grab on the other players stick, but only Marcuz came away with a penalty. The resulting power play proved to be the deciding factor, as the puck once again found itself on the stick of Bowen before being put behind Klein.
After the game, Ice Flyers Head Coach Rod Aldoff was less than pleased with the call nor the timing.

Aldoff also had praise for the way his team played. Despite being down defensemen Jesse Kessler and Craig Cescon (who are both out with undisclosed injuries), Aldoff felt his team won the majority of the periods they played this weekend.

“I thought we out-skated them, out-played them for seven of the nine periods this weekend. Friday night, the second and third period, we weren’t ourselves. Other than that, I thought we dominated seven periods.”

Follow Geoff on Twitter for live, in-game coverage (and various news & notes outside the matchups) regarding the Pensacola Ice Flyers!
Don’t forget to also follow The Sin Bin on Twitter and Facebook for all additional SPHL, ECHL, and AHL minor league hockey news and insights!