As everyone comes to terms with COVID-19, the Pensacola Ice Flyers are taking advantage of the extra time this offseason to prepare for the 2020-21 season.

PENSACOLA, Fla. – For the first time in franchise history, the Pensacola Ice Flyers did not compete in the Southern Professional Hockey League’s President’s Cup playoffs. Sure, that’s a little misleading but it kind of illustrates just how surreal this whole situation is. Technically speaking, a 10-year post-season streak was ended by a global pandemic. What seemed almost impossible a couple of months ago is now a reality. As everyone continues to come to terms with and understand COVID-19, the Pensacola Ice Flyers, and assuredly other teams around hockey, are taking advantage of the extra time this offseason while also navigating the new landscape the virus has forced upon us.
The Ice Flyers lost one-seventh, four games, of their 2019-20 regular-season home schedule. They didn’t have it as bad as some teams (for example, the Fayetteville Marksmen lost seven home games) but Ice Flyers owner Greg Harris doesn’t really consider himself or the organization lucky relative to the others in the league. The SPHL, and minor league sports in general, has always been about the competition during the games while working together off the ice. 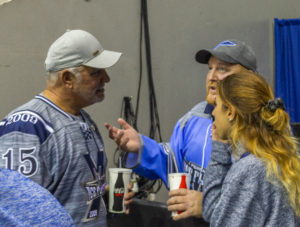 “Other teams are definitely worse off than us and that worries me because I care so much about our league and all the people employed by our league,” stated Harris.

Harris is deciding to look at the bright side of things, “coping with the revenue losses definitely is a hard pill to swallow; but, a lot of expenses were cut as well. So, there’s definitely both sides of the coin to consider when I’m evaluating our current position. I’m choosing to be optimistic in light of everything going on.”
As is the case with most ECHL and SPHL teams, the Ice Flyers are already taking advantage of the extra off-season time. Per Harris, the team’s front office staff are having Zoom meetings four days a week to plan promotions, theme nights, giveaways, etc. for the 2020-21 season. Harris noted that these meetings usually take place in May or June.
When asked about the refund situation for the Ice Flyers, Harris said that the team has had a mix between fans asking for refunds while some just want credits towards their season ticket accounts for next year. There is another group that had declined refunds/credits altogether. While Harris appreciates the generosity of the third group, he stated that he respects each individual decision as in this time, “everyone’s situation is different.”
With respect to different situations around the league, it appears the makeup of the league most likely won’t see a decrease in the number of teams. Harris seems to think that the SPHL and the teams have done a good job responding to such a unique circumstance and that he doesn’t see any teams having to fold at this time. 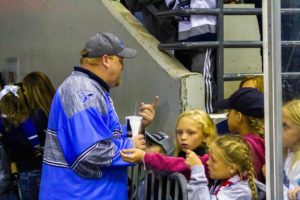 “It continues to be a fluid situation; but, we’ve made some smart decisions as owners to help stabilize our entire league in the short term and long term,” Harris said. “And that is a direct result of the structure we have for the SPHL, along with the league office and owners’ commitment to the stability and longevity of our league.”

Harris also sees a possibility for growth in the SPHL should there be a shift in a minor league hockey landscape. He didn’t tip his hand as to whether an expansion announcement was imminent at this time for 2020-21 but he did say that the SPHL business model is attractive because it has been shown to work in multiple markets and that the league has had “serious interest” in multiple cities both within its footprint as well as outside the current footprint.
If there is an addition, whether that be an established organization from another league or a completely new team, the SPHL is still sticking to their guns of steady and smart growth. There will not be a mass explosion of teams joining the league unless they all make sense in regard to footprint, venue/market, and financially.
If it happens to be a completely new organization, an announcement would need to come soon as Harris stated that the current plan for the Ice Flyers and the SPHL is to start the 2020-21 season on time. The team had already submitted its list of possible dates for home games to the league a couple of months ago and the league office is already working on a schedule, with a likely release this summer. Undoubtedly, there will be changes after it is released, or both venues will work to reschedule all postponed events, host previously book-ended events, and fit in the 2020-21 schedule.
While the league currently plans to start on time, contingencies are being made should the timeline need to be modified.

“We’re planning on starting when we usually do in late October,” Harris said. “However, if this pandemic persists, we will be looking at modifying the number of weeks in the season or pushing the season back.”

Don’t forget to follow Geoff on Twitter @SinBinIceFlyers the latest Ice Flyers news and download The Sin Bin app from the iTunes or Google Play stores for the latest news on the AHL, ECHL, and SPHL during this extended offseason!