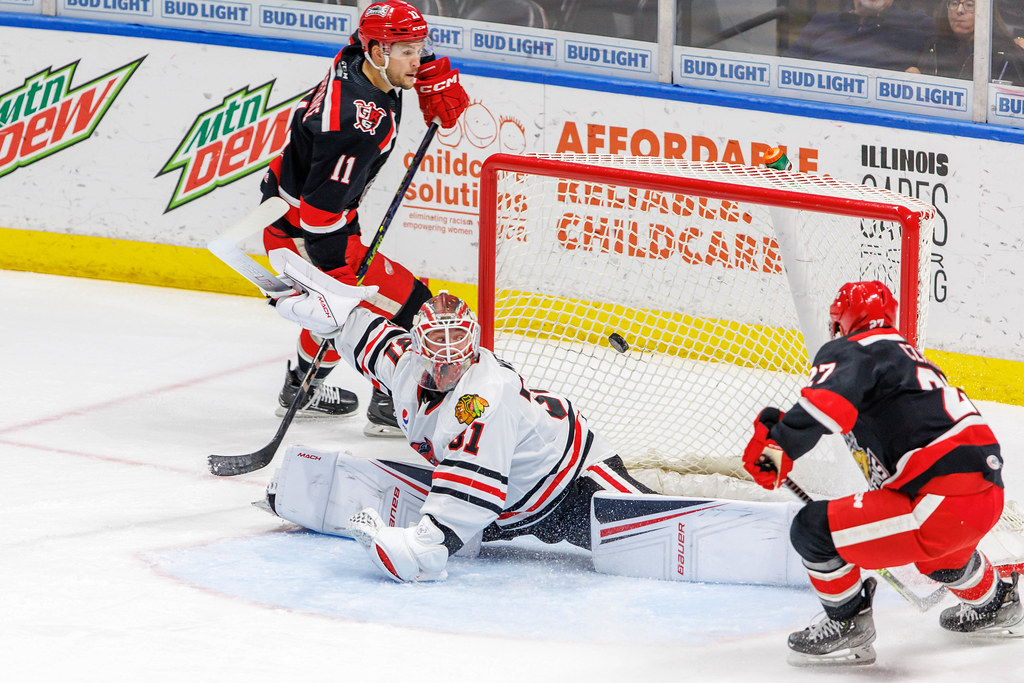 #AHL | The @goicehogs are looking to end their two-game skid as they take on the @Chicago_Wolves later today. @FPHIceHogs takes a deeper look in his latest.

ROCKFORD, Ill. – The Rockford IceHogs have avoided losing streaks for most of the season’s first four months. However, Rockford enters action Saturday on a rare losing skid.

The IceHogs will host the Chicago Wolves at the BMO Center, having dropped three straight for the first time since the opening weeks of the season. Rockford (20-14-2-2) was beaten 3-1 by the Colorado Eagles on January 14, then gave up four goals to the Grand Rapids Griffins in the opening four minutes of play Wednesday. That was more than enough for Grand Rapids to skate away with a 5-2 win at the BMO Center Wednesday night.

Friday, it was more of the same for Rockford against Springfield. The last-place team in the Atlantic Division jumped out to a two-goal lead and took a 4-2 advantage into the second intermission. Three more strikes in the final twenty was the exclamation point on a embarrassing 7-2 loss for the IceHogs.

The Hogs dropped a point behind Milwaukee into the third-place spot in the Central Division with the loss. Rockford concludes a three-game home stand against Chicago tonight before hitting the road for three games next week.

The only other time the IceHogs have dropped three consecutive games came on October 16-23, which saw Rockford start the season 1-3 before rebounding with two wins at the end of that month. What gives with the Hogs?

The Rockford offense has struggled to score of late. With nine goals in the last six games, it should come as little surprise that the IceHogs are 1-5 in this stretch. Since claiming a 4-3 overtime win over division-leading Texas on January 3, Rockford has not scored more than two goals in a game.

The IceHogs and Wolves have clashed seven times this season, with Rockford winning four of those games. This includes the last two, when the Hogs swept a home-and-home series on December 30 and 31. The Wolves won big in Manitoba in their last action on Wednesday, beating the Moose 6-2.

Chicago (13-18-3-1) is last in the Central Division at the moment but got a big boost when goalie Pyotr Kochetkov was assigned to the Wolves by the Carolina Hurricanes earlier this week. He was in net for Chicago Wednesday and will likely be the man Rockford sees between the pipes Saturday night.

Forward Malte Stromwall (7 G, 18 A) has five goals against Rockford this season and will have to be accounted for if the IceHogs are to end their current skid.

IceHogs captain Garrett Mitchell was taken down in the offensive zone midway through the second period by Griffins defenseman Simon Edvinsson Wednesday. Both skaters slid hard into the half-boards, after which Mitchell rose and skated off to the locker room holding his right arm. Mitchell did not return to action. No update as of yet, but Mitchell, who missed six weeks with a shoulder injury earlier this season, could be looking at another stretch on the shelf. He was a scratch Friday night.

On Monday, the Chicago Blackhawks recalled goalie Jaxson Stauber, leaving the Hogs with Dylan Wells and Mitchell Weeks Wednesday night. On Friday, Rockford did see the return of goalie Arvid Soderblom from a groin injury sustained on December 28. Unfortunately, he gave up all seven Thunderbirds goals in the loss.

The action at the BMO Center gets underway at 7:00 p.m. CDT on Saturday.