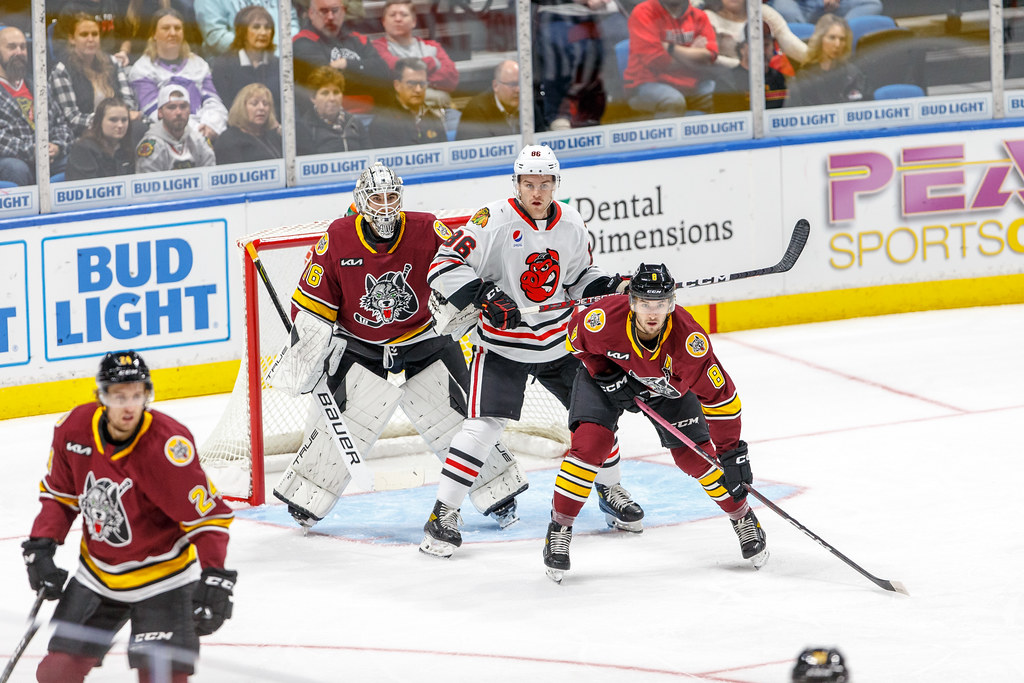 The IceHogs and Wolves renew their Central Division rivalry this weekend with a home-and-home series. (Photo by Todd Reicher/Rockford IceHogs)

Rockford, Ill.-The Rockford IceHogs get a couple of shots at their biggest rival this weekend. The Hogs have a big home-and-home with the Chicago Wolves.

The action gets underway Friday night, when Rockford hosts the struggling Wolves at the BMO Center. The IceHogs are riding a two-game win streak, while the Wolves dropped to the bottom of the Central Division standings with losses to Iowa and Milwaukee last weekend.

The teams will move to the Allstate Arena in Rosemont for Saturday’s tilt. It will be the first meeting there of the season for the two teams, who have split the first two games in Rockford. Chicago defeated the Hogs 4-1 back on October 22, while Rockford beat the Wolves 5-3 on October 28.

With Chicago having lost five of its last seven contests, it’s an opportune time for the IceHogs to pick up standings points this weekend. Here are some keys for Rockford to do just that.

The Wolves two goalies, Zachary Sawchenko and Cale Morris, have a combined save percentage of .878. This is a tandem that needs to be peppered with shot attempts.

Rockford is getting 32.75 shots on goal per game, compared to just 28.18 shots for Chicago. Neither team is at their best in net going into the weekend, but the IceHogs may have enough of an edge in this phase of the game to win a high-scoring affair.

The IceHogs have shown that they are capable of putting up goals in bunches. Rockford can weather a deficit and quickly get back into games. The Hogs are 3-2 when trailing after the first period so far this season, in part to a league-high 21 second-period goals.

Twice this season, Rockford has scored four times in a period. The Hogs quick-strike offense can turn a one-goal deficit into a two-goal lead in a matter of minutes. Such was the case October 28, when Rockford dropped four goals on Sawchenko in the middle frame.

Three of the top 20 goal-scorers in the AHL reside on the IceHogs roster; Luke Philp (8 G, 6 A) is tied for fourth in the league in goals. David Gust (7 G, 10 A) and Brett Seney (7 G, 8 A) are tied for ninth. The Hogs are fourth in team offense, scoring at a 3.83 goals per game clip. With that kind of firepower, there’s no need to panic if Rockford falls behind early.

Stay Out Of The Box

The penalty kill is improving, but the IceHogs are still just negating 78.8 percent of their infractions. Chicago’s power play has struggled; the Wolves are 31st in the AHL with a 12.5 percent success rate. Just the same, staying disciplined will keep Chicago from improving on that rate this weekend.

The Rockford man-advantage has performed well of late; the Hogs are finding the twine in 22 percent of their power-play chances. Philp leads the team with four power-play goals.

D Alec Regula was re-assigned to Rockford by the Chicago Blackhawks on Wednesday, which should prove beneficial to the Hogs blueline.

That back end got a boost from Ian Mitchell, who was activated last weekend after working through a wrist injury. In three games, Mitchell has five points (2 G, 3 A) since returning to action.

Forward Dylan Sikura (2 G, 2 A) has sat out Rockford’s last two games. It is unclear if Sikura is banged up or just getting some rest, but seeing him back in the lineup would be a boon to the Hogs.