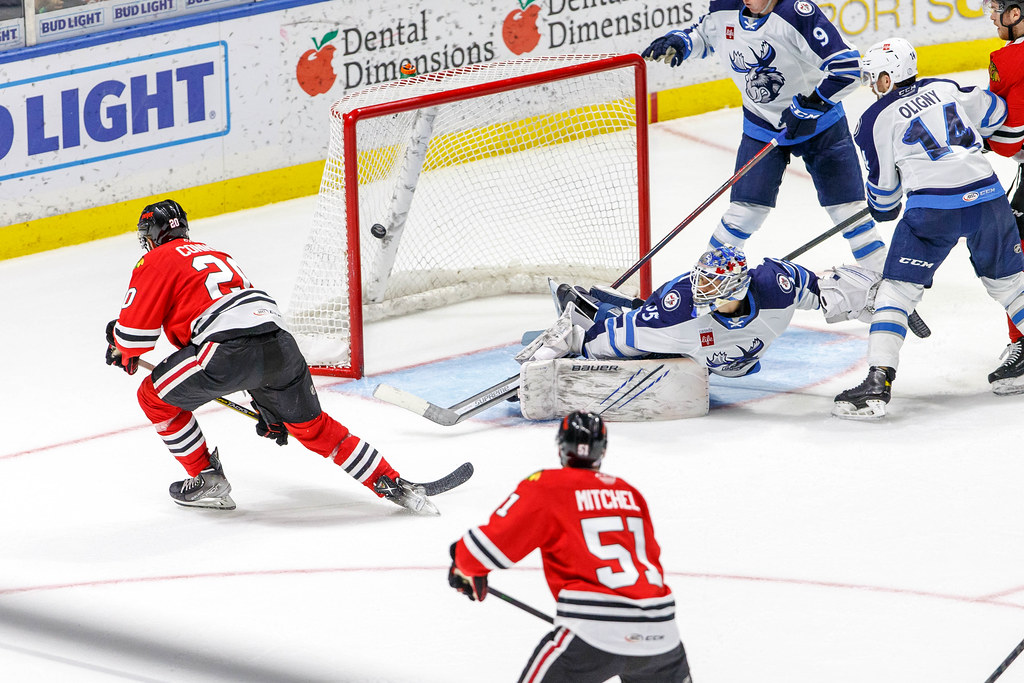 Brett Connolly had two goals to lead Rockford to a big win over Manitoba Wednesday. (Photo by Todd Reicher/Rockford IceHogs)

ROCKFORD, Ill.-The Rockford IceHogs were held to a season-low in shots on goal Wednesday at the BMO Harris Bank Center. In total, the visiting Manitoba Moose outshot the Hogs 40-16, but Rockford was on top where it really counted.

A three-point night by forward Brett Connolly paced the IceHogs to a 5-3 victory over Manitoba. The win is the fourth in a row for Rockford, who are looking to reach the playoffs for the first time in four seasons.

“It’s getting to April here, so now it’s kind of playoff talk,” Connolly explained to IceHogs broadcaster Joseph Zakrzewski following the game. “It’s fun to start talking about that. Guys are realizing that, I think. We’ll see what happens down the stretch, but we have a good team that I think compliments each other well.”

Both of Connolly’s goals came in the second period, breaking open a close game. Rockford had taken a 1-0 lead late in the opening period on an Andrei Altybarmakian goal. The play was set up by Michal Teply, who forced a turnover and led his teammate up the ice for a breakaway opportunity.

The Moose responded early in the second when Nicholas Jones potted his seventh goal of the season. That’s when Connolly got to work. The veteran snuck into the Manitoba zone and beat Moose goalie Arvid Holm to make it 2-1 Rockford 6:54 into the second period. Connolly then got his stick on a rebound of a Mike Hardman shot for a power-play goal at the 13:39 mark.

Manitoba would close the gap to 3-2 1:56 into the third period when Mikey Eyssimont found the back of the net. However, Connolly set up Lukas Reichel for a successful one-timer at the 4:45 mark to restore the two-goal advantage. Josiah Slavin added an empty-net goal to seal the game for the IceHogs. Jones would get his second of the night in the closing minutes, but that’s as close as the Moose could get.

Rockford was economical offensively, taking advantage of the limited chances in front of the Manitoba net. Hogs goalie Arvid Soderblom did the rest, stopping 37 shots to pick up his 13th victory of the season.