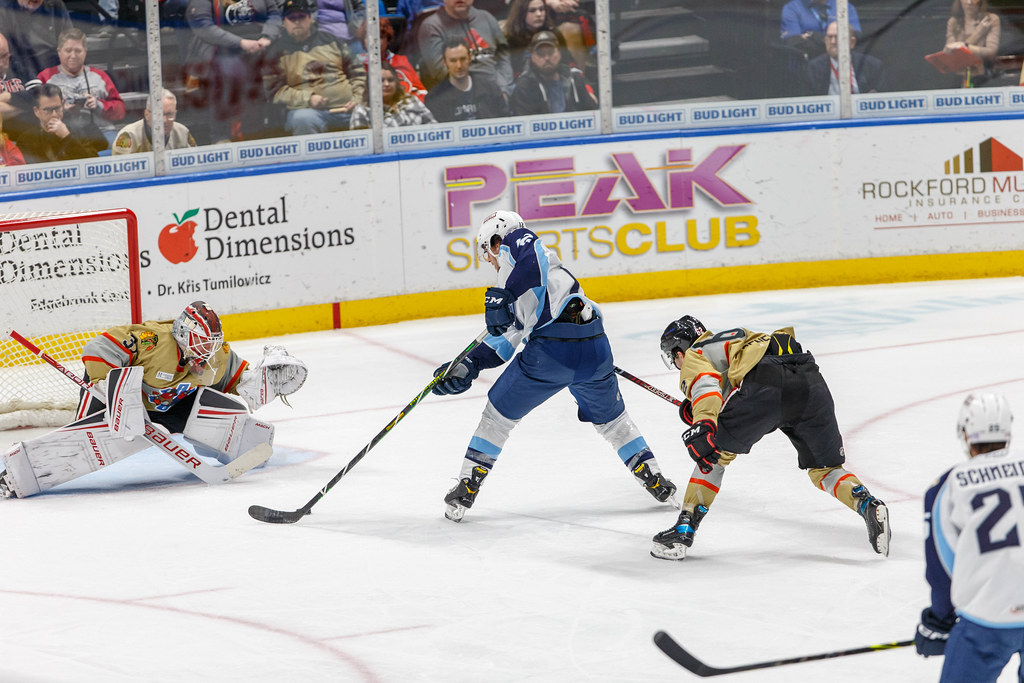 IceHogs Best Milwaukee In A Clash Of Offensive Titans

IceHogs Best Milwaukee In A Clash Of Offensive Titans

ROCKFORD, Ill.-Two of the AHL’s most potent offenses met up at the BMO Center Friday night, with the Rockford IceHogs hosting the top team in the Central Division, the Milwaukee Admirals. Coming into the game, the teams were tied for second in league offense at four goals per contest. Fans looking for an exciting, high-scoring affair did not leave the building disappointed. The furious pace and back-and-forth action kept the crowd of over four thousand on the edge of their seats. When the smoke cleared, the IceHogs stood tall. Rockford broke the Admirals’ four-game winning streak on the strength of a 6-4 victory.

Rockford torched the Admirals’ second-ranked penalty-kill unit with three goals on the man advantage. Penalties factored heavily on both sides, as Milwaukee (11-5) used power-play tallies to forge leads in both the first and third periods.

Milwaukee took an early 2-1 lead on a pair of goals by Tommy Novak, sandwiched around a power-play tip-in by Rockford’s Cole Guttman. Bobby Lynch tied the game midway through the first period with a put-back of Carson Gicewicz‘s initial shot. However, Cole Schneider converted a power-play chance for the Admirals, who led 3-2 after 20 minutes.

There was no scoring in the second period, though the pace did not slow. Both teams dismantled rushes up and down the ice, contesting passes and checking hard at both ends. Milwaukee goalie Devin Cooley made 15 saves in the middle frame to keep his club in the lead.

At the other end, Hogs netminder Dylan Wells wasn’t as busy, stopping eight Milwaukee attempts. However, he might have made the two biggest saves of the night midway through the second.

Wells stood his tallest when Brett Seney was stripped of the puck at the Milwaukee blue line by Luke Evangelista. The Admirals forward streaked toward the Hogs’ net completely unchallenged. Wells denied the shot attempt, as well as Zach Sanford‘s follow-up shot to snuff out the scoring threat.

The IceHogs got power-play goals from Lukas Reichel and Dylan Sikura early in the third period, surging to a 4-3 lead. Schneider’s second goal on the man advantage pulled Milwaukee even at four 9:32 into the period before Rockford took over the game.

Seney, whose slashing infraction had led to the Admirals’ equalizer minutes before, skated to the high slot in time to take in a backhanded pass from behind the net by Alex Vlasic. Seney’s aim was true, and the Hogs led 5-4 on his tenth goal of the season at the 12:18 mark.

Wells sent a couple of Milwaukee shots away over the next few minutes, allowing Sikura the chance to put the game away with 3:04 remaining. Sikura maneuvered into the slot and sent a shot through some well-placed traffic to get it past Cooley and into Twinesville to close out a busy night of scoring.

Sikura’s two goals earned him First-Star honors. Reichel and Seney, each of whom had a goal and two helpers, were Second and Third Stars, respectively. Guttman (1 G, 1 A) could also claim a multi-point evening, matching his output in Wednesday’s 7-2 win over Texas.

With such offensive firepower, it was a rough night for the goalies. Wells recovered from a frustrating opening frame to stop 15 of Milwaukee’s last 16 shots on goal. He picked up his third win of the season with 24 saves on the night. Cooley faced 42 shots, making 36 saves. He loses for just the second time in six starts.

The Admirals don’t have to wait long for another track meet with Rockford. The two teams take the scoring circus to Milwaukee Saturday night. Puck drop is scheduled for 7:00 p.m. CDT. The 9-6-0-1 Hogs vault into third place in the Central Division standings with their third-straight win.