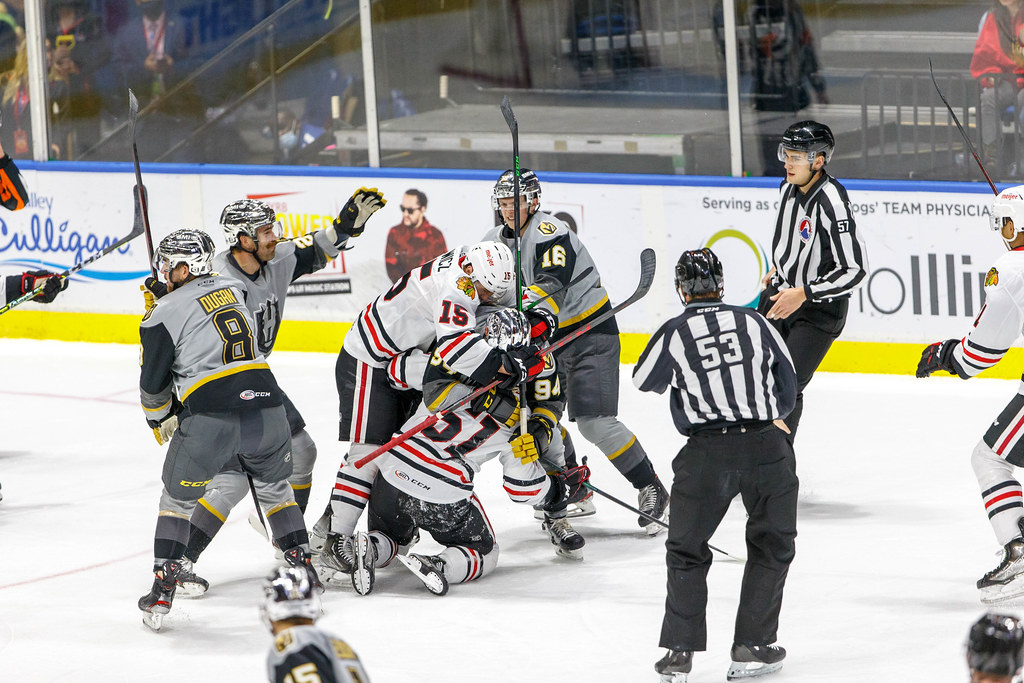 Rockford and Henderson fought to a split in the first games between the two teams this weekend. (Photo by Todd Reicher/Rockford IceHogs)

Rockford, Ill.-The Rockford IceHogs got their first up-close look at the Henderson Silver Knights during the weekend. Fans at the BMO Harris Bank Center saw both the worst and the best of a young Rockford squad on Friday and Saturday.

The IceHogs garnered a split of the two-game set, rebounding from a 5-0 defeat Friday with a 2-1 victory Saturday. In doing so, Rockford (10-9-1-1) ended a three-game homestand on a winning note. Here’s a quick recap of the weekend’s action.

To watch the first half of the opening period, one would have believed the Hogs to be the better team. Rockford quickly ran up a 10-1 shot advantage in the first ten minutes. Henderson was able to flip a switch midway through the first and controlled most of the remainder of the contest.

Danill Miromanov gave the Silver Knights a lead they would never relinquish at 13:09 of the first. Pavel Dorofeyev made it 2-0 early in the second stanza, but the game didn’t really get out of hand until later in that period.

The IceHogs power play lost possession in the Henderson zone, leading to a breakaway opportunity for Maxim Marushev the other way. In attempting to stop Marushev, Rockford committed an infraction that led to a successful penalty shot. The back-breaker was a Paul Cotter power-play tally in the final minute. Jermaine Loewen added the fifth Henderson goal midway through a chippy third period.

In the closing minutes, frustrations boiled over on the Rockford side. Defenseman Wyatt Kalynuk was given a ten-minute match penalty for an elbow to the head of Reid Duke.

The IceHogs again opened strong and controlled the early action. Saturday, they were able to hold Henderson in check for most of the night.

The Silver Knights opened the scoring on a Jake Leschyshyn goal 18:17 into the first period. However, Rockford had a response less than a minute later. Ryan Stanton found Carson Gicewicz at the bottom of the left circle for the equalizer at the 19:00 mark.

The game stayed tied at one goal apiece until the start of the third period, which opened with 18 seconds of Rockford man advantage. The clock ran out on the power play, but as it expired, Ian Mitchell finished a two-man rush on the Silver Knights net led by MacKenzie Entwistle. The game-winner was sent behind Henderson goalie Logan Thompson 18 seconds into the period.