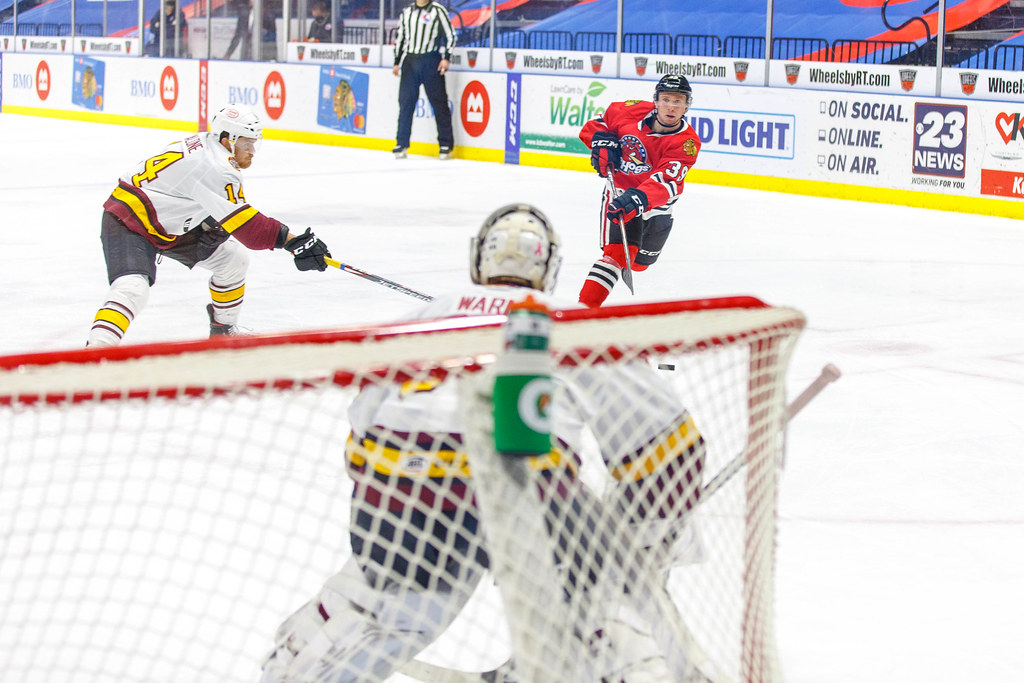 Dylan McLaughlin had a goal and an assist in Rockford's 4-1 win over Chicago. (Photo by Todd Reicher/Rockford IceHogs)

ROCKFORD, Ill. – The Chicago Wolves may be the Central Division champs, but on Friday night, the Rockford IceHogs were the ones standing tall at the BMO Harris Bank Center.

Rockford was triumphant in its home finale in front of a small crowd of IceHogs season ticket holders. Anchored by a 36-save performance by Matt Tomkins, the Hogs beat Chicago 4-1.

The Wolves came out a bit flat after Wednesday’s 7-0 rout of Grand Rapids. Rockford took advantage, building a 2-0 first period lead. Dimitry Osipov got the IceHogs on the board midway through the opening period, pinching into the slot to take in a Dylan McLaughlin feed and zip it past Chicago goalie Beck Warm at the 11:34 mark.

Late in the first, Mitchell Fossier sent an offering from the top of the left circle. Warm made the pad save, but Fossier had followed his shot to the net and sent the rebound to twinesville. The goal came with 16 seconds left in the period, allowing Rockford to enter the intermission with a two-goal advantage.

Infractions were sparse in this affair. However, an interference penalty by Rockford’s Anton Lindholm proved to be key to the home team. The Wolves power play had scarcely begun when McLaughlin gained possession and broke for the Chicago net. His wrist shot from the left dot got the best of Warm, putting the IceHogs ahead 3-0 8:28 into the second period.

Andrei Altybarmakyan made it a 4-0 game 7:52 into the third period, catching the top corner of Warm’s net. It wasn’t until this point in the contest that the Wolves were able to muster a response. Tomkins was able to keep the lid on the net until the latter stages of the contest, when Tommy Novak finished a scrum in front of the Hogs net to finally get Chicago on the board.

Tomkins, who like the IceHogs have shown marked improvement after a rocky start to the season, turned in one of his better efforts of the 2020-21 campaign, picking up his fifth win. He was voted the game’s First Star, followed by McLaughlin and Osipov. Each had a goal and an assist in the Rockford victory.

The Hogs and Wolves will wrap up the season tonight at the Wolves’ practice facility in Hoffman Estates. Puck drop is scheduled for 7:00 p.m.