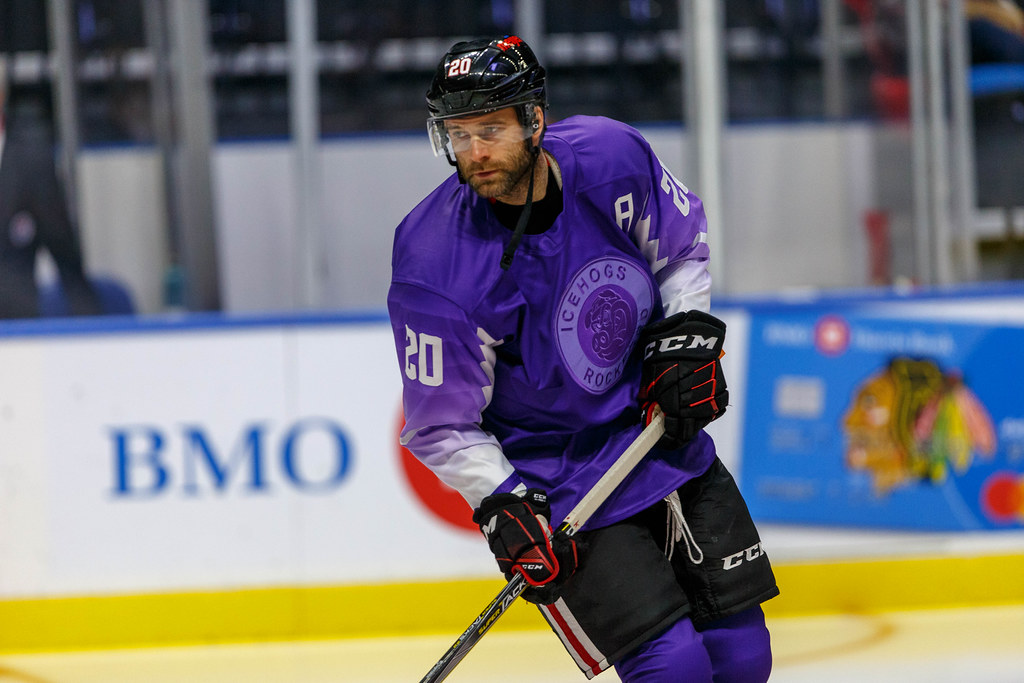 This past weekend, the Hogs suffered several losses that could hamper the offense for the immediate future

Veteran Brett Connolly will miss the next couple of weeks with a leg injury. (Photo by Todd Reicher/Rockford IceHogs)

ROCKFORD, Ill. – The Rockford IceHogs are not a team filled with prolific scorers. This past weekend, the Hogs suffered several losses that could hamper the offense for the immediate future.

The Chicago Blackhawks AHL affiliate is hitting the road for three games this week. The IceHogs will take the ice in Milwaukee Wednesday night without their top two point producers, Lukas Reichel and Brett Connolly.

Reichel has entered concussion protocol following a collision in the third period of in Sunday’s game against the Milwaukee Admirals. Reichel was skating toward a loose puck when he got tangled up with Admirals defenseman Matt Donovan. The Hogs rookie took a spill into the half boards and was taken to the locker room early in the third period. Reichel, who leads Rockford in scoring (7G, 5A) did not return in Rockford’s 2-1 victory.

IceHogs interim head coach Anders Sorensen confirmed that Reichel will be out for Wednesday’s game in Milwaukee. Not much is known beyond that.

“I saw him today,” Sorensen said Tuesday at Rockford’s weekly media session. “He was in good spirits. He said under the circumstances, he’s feeling pretty good.”

Connolly (5G, 6A) was injured late in the third period in Saturday’s shootout loss to the Chicago Wolves. Connolly had just come onto the ice when he collided with Wolves forward Jamieson Rees in the neutral zone. Connolly was helped off the ice and didn’t return. The team announced Tuesday that the veteran forward was expected to miss one to two weeks with a right leg injury.

Also expected to miss a couple of weeks is Kale Howarth, who scored his first AHL goal in Sunday’s win. Howarth fell hard on his right shoulder during a fight with Milwaukee’s Ben Harpur in the first period. He went to the locker room, though he did return to the contest for the second and third periods.

Rockford’s offense took another hit on Monday, when forward Josiah Slavin (4G, 4A) was recalled to the Blackhawks.  For a team 28th in the AHL in scoring with 2.67 per game, this is a huge issue. Slavin, Connolly and Reichel account for 16 of the IceHogs 40 goals this season. How is Rockford going to pick up the slack?

Alexander Nylander (6G, 2A) and Dylan McLaughlin (2G, 6A) will be counted on to lead Rockford on the scoresheet. Help comes from Chicago in the form of Philipp Kurashev, who was assigned to the Hogs Monday.

Kurashev last played AHL hockey in the 2019-20 campaign; he had 19 points (7G, 12A) in 36 games. Kurashev will likely slide into the top line center role, unless Sorensen pairs McLaughlin with Nylander on the top line.

Several IceHogs will have the chance to take advantage of top-six opportunities. Evan Barratt just had a four-game point streak broken on Sunday. He could be a player who finds himself with an increased role on a scoring line.

Other players who could provide some welcome offensive production are D.J. Busdeker, who is still looking for his first goal of the season, and rookie Jakub Pour, who is currently on an eight-game pointless skid.

Following Wednesday’s game with the Admirals, Rockford travels to Grand Rapids for a weekend series with the Griffins. If Reichel is not ready to return by then, the IceHogs will have to organize a scoring committee to tread water in the Central Division for a while.