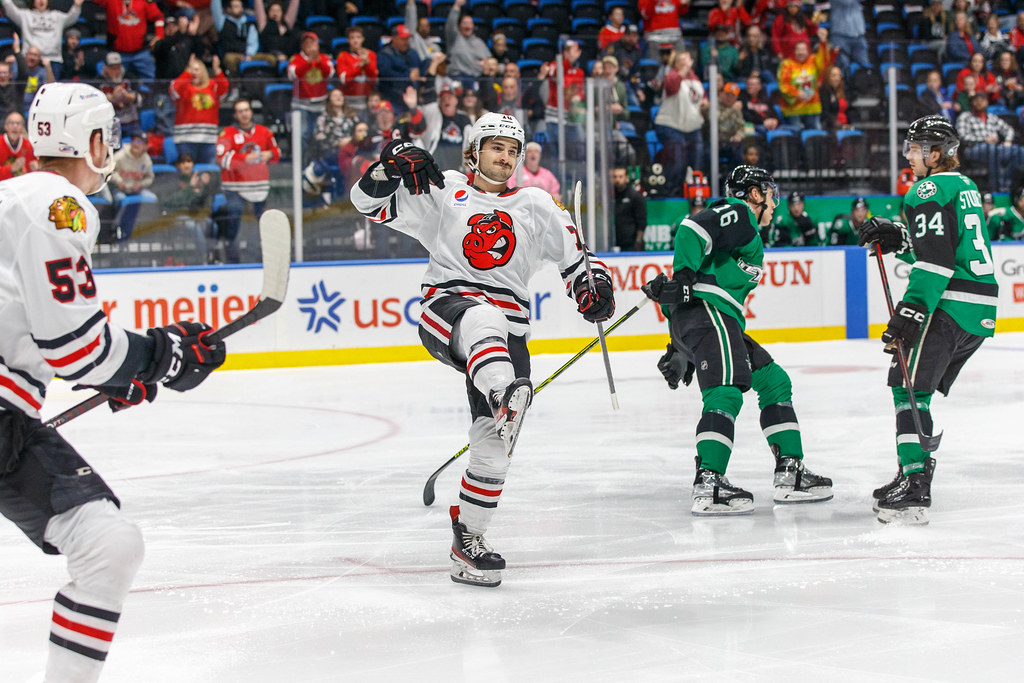 ROCKFORD, Ill.-The last time the Rockford IceHogs took on the Texas Stars, the result was a 7-2 rout at the BMO Center on November 23. That loss seems to have infused the Stars with some motivation. Rockford now travels to the Lone Star State this week to face what is now the hottest team in the American Hockey League.

Texas has gone 9-1 since that lopsided loss in Rockford last month. The Stars are 7-0 in December, the longest current win streak in the league and, with Colorado, tied for the season’s longest run of wins. Texas (16-7-2-2) has shot right to the top of the Central Division. With 36 points, they lead second-place Milwaukee, who now have 32 points.

The IceHogs (14-8-1-2) are playing solid hockey as well. Since that 7-2 win over Texas, Rockford has gone 5-2-1-2 to stay in the Central Division hunt. Currently, the Hogs are tied with Manitoba at 31 points. Two regulation wins in Cedar Park over the Stars would have them breathing down the necks of Texas.

It’s easy to write about sweeping the Stars on Tuesday and Wednesday. To do so on the ice is going to take some work.

Rockford is 2-1 in the season series with Texas. Before their win at the BMO Center, the Hogs split two games in Cedar Park. Rockford dropped a 3-2 decision on November 12 before defeating the Stars 5-4 the next afternoon.

Games in this rivalry are usually fast-paced and hinge on who has the puck in high-danger scoring areas. The formula for Texas has been to get control of games early. The Stars are 11-0 when leading after the first period. Rockford has been able to overcome first-period deficits, having gone 7-4 in such situations this season.

Leading the way for Texas has been forward Riley Barber (15 G, 11 A), who has seven goals and three helpers in the last ten games. Former IceHogs skater Tanner Kero (6 G, 15 A) and Stars captain Curtis McKenzie (9 G, 8 A) also lead the way offensively. The Stars (3.74 goals per game) sit right behind the Hogs (3.80) in league scoring.

It is on defense where Texas has made its mark of late. Since giving up seven in Rockford on November 23, the Stars have held opponents to one goal five times and to two goals twice. Texas is giving up 2.74 goals per game, seventh-best in the league.

The IceHogs will likely see both halves of the Stars goalie tandem. Both veteran Anton Khudobin (2.50 GAA, .918 save percentage) and Matthew Murray (2.40 GAA, .901 save percentage) have been outstanding for Texas. Of course, both goalies were lit up in Rockford the last time the teams played, so there is a motivation for atonement.

The IceHogs are still capable of filling a net, as evidenced by their 7-4 win in Iowa on December 13. Rockford enters the road trip after splitting games at home to Toronto (a 4-3 loss) and Hartford (a 3-2 win).

There have been several changes to the Hogs roster that should figure prominently in the upcoming games with Texas.

Filip Roos, sent to Rockford by the Blackhawks a week ago, has made an immediate impact on the ice. He picked up his first AHL goal in the win over Iowa on Tuesday, then potted the game-winner Saturday against Hartford.

Rockford captain Garrett Mitchell returned to the lineup on Saturday night, which saw the IceHogs beat Hartford 3-2 at the BMO. Mitchell was out since November 16, when he injured his left shoulder against the end boards of Allstate Arena in a game against the Wolves.

On Sunday, the IceHogs recalled defenseman Cliff Watson, along with forward Kale Howarth. Watson has been shuttled between Rockford and the Indy Fuel several times this season. For Howarth, this is his first recall after scoring six goals in 14 games with Indy. Last year, he took part in 12 games for the Hogs, with two goals and an assist.

Monday, defenseman Issak Phillips (3 G, 14 A) was recalled to the Chicago Blackhawks. Coming down to the IceHogs, for the first time since the opening weekend of the season, is goalie Arvid Soderblom. Goalie Mitchell Weeks was also reassigned to the Indy Fuel of the ECHL.

The play of Roos so far softens the blow of the departing Phillips, who leads the AHL with a plus-17 skater rating. Soderblom was pegged to be Rockford’s starting goalie this season but has spent most of the first three months in Chicago. It would not be a stretch to see Soderblom start both games for the Hogs in Texas.

If Rockford coach Anders Sorensen elects to rest the returning Soderblom on the trip, both Jaxson Stauber and Dylan Wells are on the IceHogs roster. Wells is coming off a 38-save performance in the win over Hartford Saturday night.

The action gets underway in Cedar Park Tuesday night. Both Tuesday and Wednesday’s games are set to begin at 7:00 p.m. CDT.