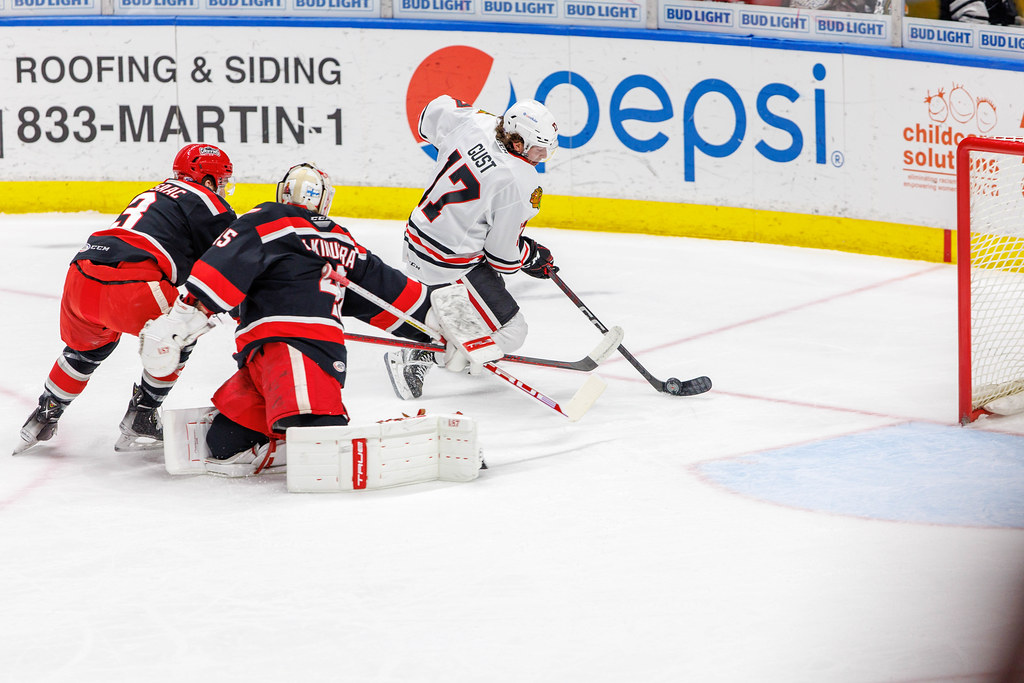 ROCKFORD, Ill.-The Rockford IceHogs conclude the month of December with a home-and-home series with the Chicago Wolves. The action gets underway on Friday night, when the IceHogs visit Rosemont’s Allstate Arena. On Saturday, Chicago comes to the BMO Center for a New Year’s Eve bash.

The IceHogs are coming off a 4-1 victory over the Grand Rapids Griffins Wednesday, Rockford’s first action since a 3-2 loss to the Wolves in Rosemont on December 23.

“I think the guys are a little salty from that one,” IceHogs coach Anders Sorensen admitted to Hogs reporter Katie Florio about that loss, “so I expect us to come out and play really hard right off the hop.”

Rockford is 2-3 against their intrastate rivals this season, despite the overall records of both teams. The Hogs are 16-10-1-2 and tied with the Manitoba Moose for second place in the Central Division. Chicago (10-14-3-0) inhabits the division basement with Grand Rapids. Tuesday night, the Wolves beat the Milwaukee Admirals 4-3 to keep a three-game point streak alive.

Chicago got an excellent performance in goal by Zachary Sawchenko to beat the IceHogs a week ago. Rockford outshot the Wolves 13-1 in the final period, but Sawchenko kept the Hogs out of the net and made Alexander Pashin‘s third-period goal stand up as the game-winner.

Arvid Soderblom, who also played well in that game, left Wednesday’s game with the Griffins after only 6:14 of net time. Jaxon Stauber made 22 stops in relief to pick up the win. Dylan Wells is also having a solid month in net for Rockford; Sorensen may use both goalies if Soderblom is unavailable this weekend.

Gust Piling Up The Points

David Gust (17 G, 17 A) continues to display a hot hand for Rockford, posting his second career hat trick Wednesday against the Griffins. It came just two weeks after his first, which came December 13 in Iowa.

Gust was signed this past summer by the IceHogs for some veteran offense. In just 29 games this season, the Orland Park, Illinois native is approaching his career-highs in both goals (18) and points (36). He could eclipse both this weekend with a strong performance.

“He plays hard,” Sorensen told Florio about Gust after the game. “He plays in the dirty areas. He has skill, but the biggest thing you notice with him is that he plays competitive.”

Gust has been able to capitalize on strong passers like Brett Seney (13 G, 22 A) and Lukas Reichel (13 G, 21 A), finishing scoring opportunities and leading the IceHogs in goals.

What's the weather like right now? It's getting pretty GUSTY IN HERE! 🤩😎 pic.twitter.com/VYF6o95Onq

In the wake of Soderblom’s departure from Wednesday’s game, Mitchell Weeks was recalled to Rockford from the ECHL’s Indy Fuel on Thursday. Weeks is fresh off a 27-save blanking of the Kansas City Mavericks Wednesday.

Rockford also reassigned forward Kale Howarth to the Fuel Thursday. It could signal the return of injured forward Luke Philp (12 G, 7 A) to the lineup, though no word has come from the team regarding Philp missing the Hogs last eight games.

Puck drop in Rosemont Friday is scheduled for 7:00 p.m. CDT. The action at the BMO Center on Saturday is set to start at 4:00 p.m. CDT.