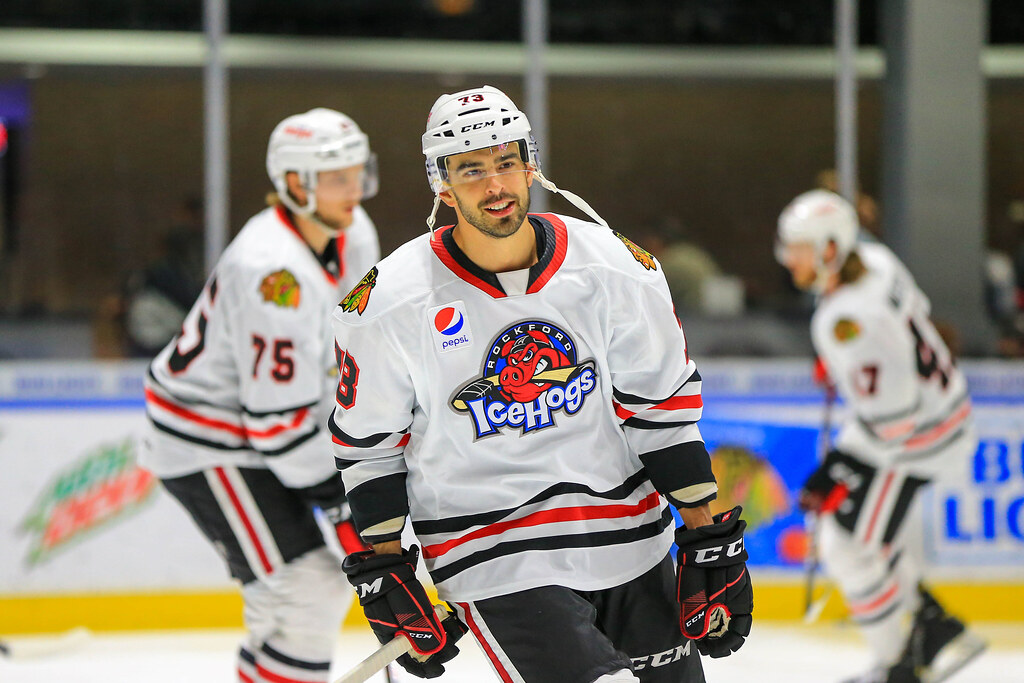 IceHogs Get Their First Look at Cleveland

After an unexpected week between games, the Hogs are ready to return to the rink.

IceHogs Get Their First Look at Cleveland

ROCKFORD, Ill. – The Rockford IceHogs hope to continue their winning ways this weekend. After an unexpected week between games, the Hogs are ready to return to the rink.

Rockford’s Tuesday date with Iowa was postponed due to COVID issues with the Wild. Instead, the now six-game homestand begins Friday, when the IceHogs renew their rivalry with the Cleveland Monsters. The two games will be the first of four between the teams this season.

The IceHogs (13-11-1-1) will be without the services of rookie center Lukas Reichel, who the Chicago Blackhawks recalled on Wednesday. Reichel (11G, 9A) is the reigning AHL Player of the Week and the team’s leading scorer. The IceHogs will miss his offense, but Rockford does have some other sources of offense.

Tops on that list may be Brandon Pirri, who signed a PTO with the IceHogs last week and promptly went on a tear. The veteran forward posted a hat trick in Saturday’s win in Milwaukee and can be expected to send plenty of rubber toward the Monsters’ nets.

Dylan McLaughlin had points in both games last weekend and formed a very effective forward line with Pirri and D.J. Busdeker. Andrei Altybarmakian got his offensive game on track with goals in each of his last two games.

Rockford will have forward Mike Hardman, who was assigned to the AHL Wednesday. Forward Kurtis Gabriel, another player sent down by the Blackhawks, entered the league’s COVID protocols on Thursday.

Goalie Arvid Soderblom and Cale Morris were also sent to the IceHogs. Expect Soderblom and Collin Delia to split the workload in goal this weekend as Rockford looks to extend a two-game winning streak.

Across the ice, Cleveland is struggling a bit, having lost four of its last five games. Their last action came on January 9, when they dropped a 4-3 decision to the Chicago Wolves. Overall, the Monsters are 11-9-4-3 and in fifth place in the AHL’s North Division.

Like Rockford, Cleveland has been an offense-by-committee for long stretches this season. Center Brendan Gaunce (19 points) paces the Monsters with nine goals. He shares the points lead with defenseman Jake Christiansen who has five goals and 14 helpers this season.

Former IceHogs captain Tyler Sikura (6G, 7A) has points in his last two games and can be counted on to create havoc in front of the Rockford net. Trey Fix-Wolansky (6G, 5A) and rookie Josh Dunne (6G, 4A) have also chipped in for Cleveland.

The Monsters are a bit green in net, but Cam Johnson is coming off a 2-1 overtime win over Grand Rapids on January 8. Rockford may also see rookie Jet Greaves in the Cleveland net this weekend.

Both teams have been near equals on special teams, though the Monsters’ power play has been very effective on the road (20.4 percent road power-play efficiency). Pirri makes the Rockford man advantage more dangerous, so limiting penalties will be vital for both teams this weekend.