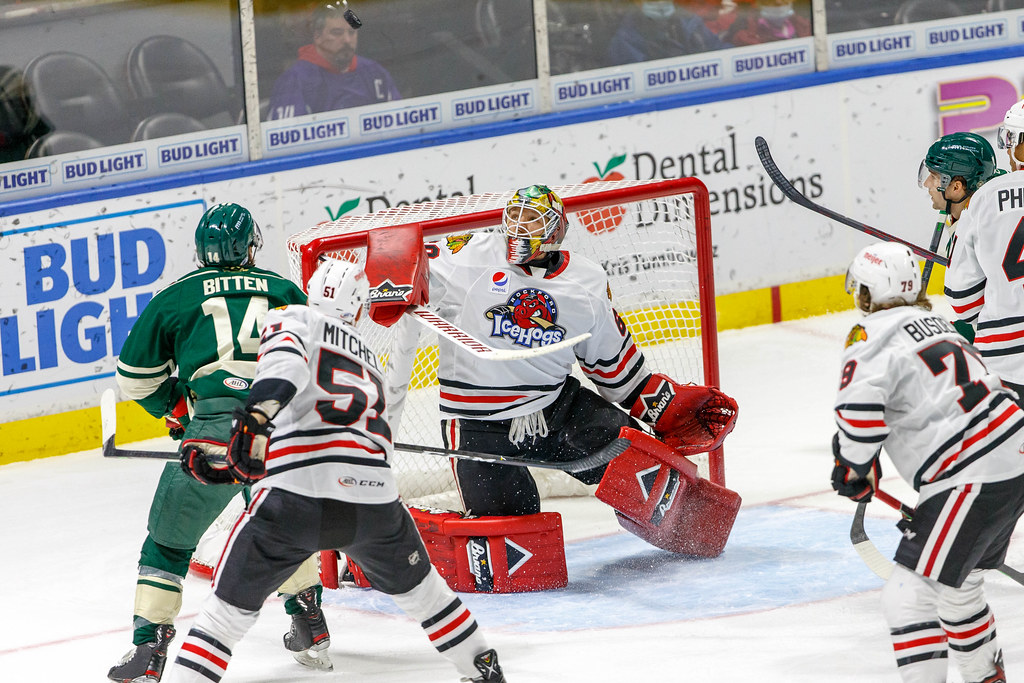 IceHogs Grind Out A Comeback Win Over Iowa

Ian Mitchell and Collin Delia both played a part in Rockford's 4-3 win over Iowa Wednesday. (Photo by Todd Reicher/Rockford IceHogs)

IceHogs Grind Out A Comeback Win Over Iowa

ROCKFORD, Ill – The Rockford IceHogs put their snouts to the grindstone Wednesday night. Rockford’s work ethic was on full display against the Iowa Wild.

The IceHogs rallied from a two-goal deficit, tying the visiting Wild late in regulation and posting a 4-3 shootout triumph. Leading the way was Ian Mitchell, who earned First Star honors with a three-assist evening at the BMO Harris Bank Center.

For the Wild, a bad break late in the match saw them drop their fifth consecutive game. Rockford and Iowa now share identical 9-8-1-1 records and third-place in the Central Division.

Garrett Mitchell got the scoring started early for Rockford. Mitchell sent a stretch pass to him as the Hogs captain approached the Wild blueline. Mitchell got to the right dot before sending the puck to the top shelf of the Iowa net. Rockford led 1-0 just 47 seconds into the game.

The Wild tied the game in the latter stages of the first period, just after Rockford had killed off a penalty. Nate Sucese got control of a loose puck near the red line, beat Hogs defenseman Issak Phillips to the front of the net, and sent a shot over the blocker of Rockford goalie Collin Delia at the 13:41 mark.

It was Iowa nabbing a quick goal to begin the second period. Nick Swaney was the recipient of a backdoor feed from Dominic Turgeon at the 1:17 mark. Iowa then increased their advantage to 3-1 when Turner Ottenbreit fired from the top of the offensive zone past a screened Delia at 7:55 of the second.

The IceHogs got one back late in the second. D.J. Busdeker capped a nice sequence of passing by Alexander Nylander and Mitchel, who found Busdeker at the right post for the tap-in at 18:34. Busdeker’s second goal of the season cut the Iowa lead to 3-2 at the second intermission.

The Wild held Rockford in check until the closing moments, when the Hogs took advantage of some puck luck to post the equalizer with just 1:48 remaining. Wyatt Kalynuk drove the Iowa net but lost control of the puck. Iowa defenseman Doyle Somerby attempted to clear the loose puck, but inadvertently knocked it past Wild goalie Dereck Baribeau.

The teams traded chances in the overtime skate before the contest went to a shootout. Nylander and Joseph Cramarossa traded goals in round one. Mitchell and Marco Rossi were stopped in the second round. Andrei Altybarmakian‘s third-round goal proved the difference, as Delia rejected Swaney’s attempt.

Delia picked up his third win of the season, stopping 27 shots on the night. Baribeau was the hard-luck loser Wednesday, with 30 saves in regulation and overtime.

The IceHogs host Henderson on Friday and Saturday nights as the homestand continues. Iowa will attempt to put an end to its losing streak in Milwaukee this weekend.