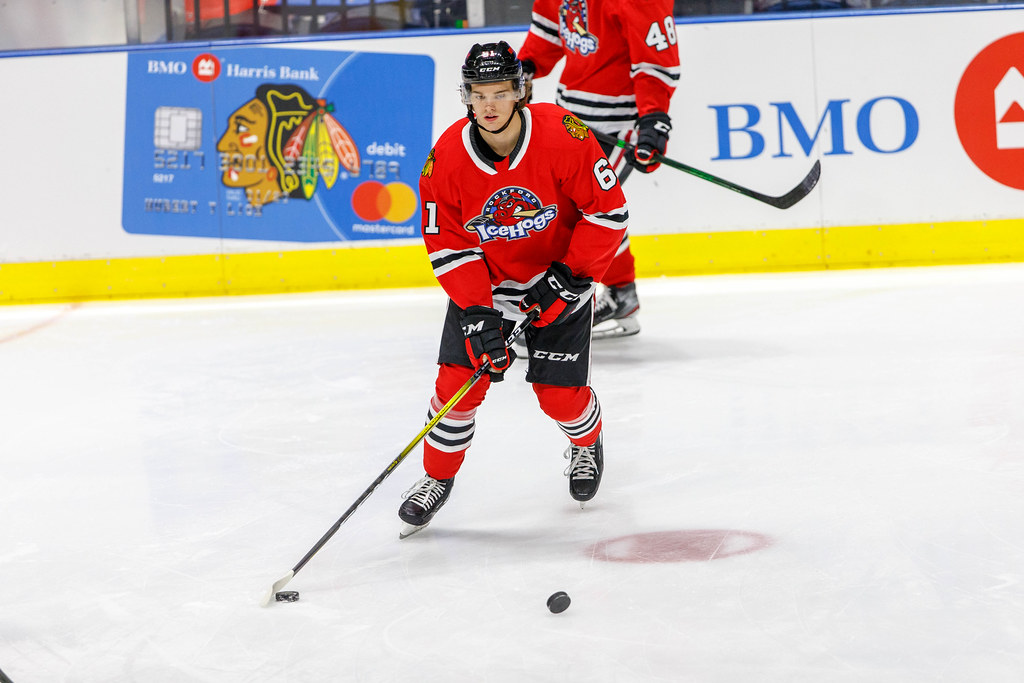 Chad Yetman has a goal and two assists in his first three games with Rockford. (Photo by Todd Reicher/Rockford IceHogs

ROCKFORD, Ill. – The Rockford IceHogs are still without a win two weeks into the 2020-21 season. The Hogs dropped an overtime decision to Iowa Saturday but will have several chances to pick up that elusive victory this week. Here’s the latest on the happenings with the Blackhawks AHL affiliate.

Despite a 0-2-1 start, the beginning of the season has been good to a couple of players who seem to be intent on taking advantage of available minutes. One such player is forward Chad Yetman.

Yetman is Chicago’s sixth-round pick in this past summer’s draft. In normal circumstances, he probably would have finished out his junior career with the Erie Otters of the OHL. With that league currently on hiatus, Yetman signed an AHL deal with the IceHogs on January 11.

Yetman led Erie with 43 goals in 61 games last season. So far, taking the chance to jump up to the AHL and make a grab at playing time has paid off. Yetman has appeared in all three games with Rockford and posted his first pro goal in a February 9 loss to the Wolves.

Yetman racked up a pair of assists in the first period of what eventually became a 3-2 overtime loss to Iowa on Saturday. His three points are tied with Cody Franson for the team lead in the early stages of the season. Yetman has also found a spot on Rockford’s first power-play unit.

With several Blackhawks prospects up getting NHL minutes or sitting on the taxi squad, there are opportunities for a player like Yetman to impress the team brass and earn an entry contract. That’s a path current Hawks forward Andrew Shaw navigated back in 2011 when he signed an AHL deal with Rockford.

Yetman’s a different type of player from Shaw, whose gritty, agitating style quickly moved him from an AHL contract with Rockford to an entry deal and a spot on the Blackhawks. Nevertheless, Yetman has to be happy about the way his season has started.

At the team’s media zoom session on Monday, Hogs coach Derek King had the following to say about his team’s play in the opening weeks:

“We’re making young mistakes…[but] I love our compete, for the most part. We haven’t competed for a full sixty, but we’re almost there.”

King addressed Yetman, as well as many of his young charges as they look to adjust to the level of play found in the AHL:

“I think the big thing with him (Yetman) is he’s got to learn to play without the puck. He’s good when he has the puck; now, we’ve go to get that puck back. It’s not just him, but I think this is what happens when these guys come to the league (from juniors). They’re a little naive to it and then, all of a sudden, its “I’ve got to get this puck back. I’ve got to work harder now”. I think when he (Yetman) does that, there might be something there down the road.”

Chicago made a couple of paper moves in order to keep the required four players on their taxi squad. Evan Barratt was recalled to the taxi squad Thursday and returned to Rockford Friday. Barratt, who took a high hit from Wolves defenseman Max Lajoie last Tuesday, finished that game and skated in Iowa Saturday night.

Forward Mikael Hakkarainen made the phantom trip to the taxi squad on Saturday and was reassigned to the Hogs on Sunday. Also coming down to Rockford was forward MacKenzie Entwistle, who had 26 points (11G, 15A) for the IceHogs in his rookie season.

With several players, like Shaw, on the injured list at the moment, it should not be a surprise to see other Hawks prospects getting similar treatment in regard to short-term call-ups.

The IceHogs picked up their first point of the season. However, Rockford let a 2-0 lead evaporate and dropped their first meeting with the Wild. Matt Tomkins (33 saves on 36 shots) stopped a penalty shot in overtime to keep hope alive, but Adam Beckman won it for Iowa in the fourth extra minute.

Brad Morrison made his season debut a memorable one, scoring both of Rockford’s goals. Yetman had assists on both tallies, which came in the opening period. Defensemen Cole Moberg and Issak Phillips also got into the lineup for the first time, as did forward Mitchell Fossier. Fossier, like Yetman, is on an AHL contract with Rockford. He picked up an assist on Morrison’s second goal.

Rockford has two weeknight home dates coming up. Tuesday, the Hogs face the undefeated Chicago Wolves. Thursday, the Grand Rapids Griffins come to the BMO Harris Bank Center. Both games are set to start at 6:00 p.m.

Give me a follow at @SinBinIceHogs to get the lowdown on the IceHogs throughout the season.