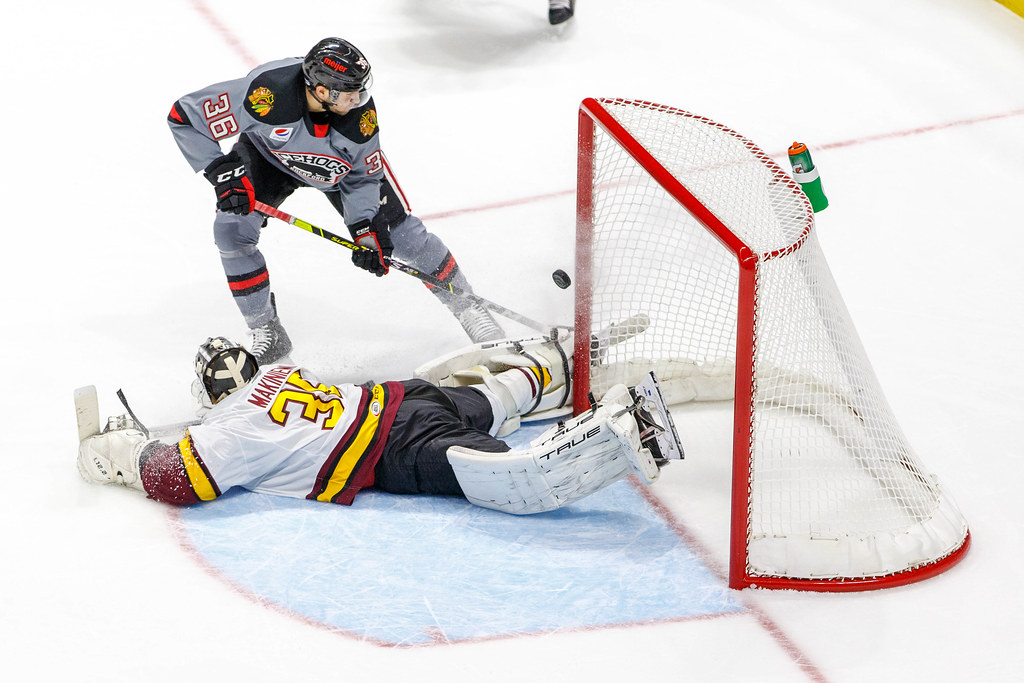 ROCKFORD, Ill.-The Rockford IceHogs found themselves in a hole early in Friday night’s game with the Chicago Wolves. With Chicago swarming the offensive zone and taking a two-goal lead, the Wolves appeared to be on their way to another pasting of Rockford at the BMO Harris Bank Center.

Things didn’t turn out that way.

The Hogs picked themselves up off the deck, rallied behind their special teams, and wound up topping the Wolves 6-3. Rockford improves to 4-6-1 and claimed the first of a home-and-home series with Chicago, which concludes Saturday night at Allstate Arena in Rosemont.

“The guys did a great job,” said Hogs interim head coach Anders Sorensen to the media following the game. “We’re down 2-0 and we had a response.”

The Wolves (8-4-1) dug into the Rockford zone throughout the first fifteen minutes of action. Dominick Bokk finished off a barrage of pucks in front of Hogs goalie Arvid Soderblom for a 1-0 Chicago advantage 2:48 into the contest. Josh Jacobs capped a slick faceoff sequence with a scoring strike from the outside of the right circle at the 7:31 mark to make it 2-0 Wolves.

At this point, Rockford was being dominated at even strength. The turning point in the game came when a Joey Keane hooking infraction, gave the IceHogs their only man advantage of the evening. Brett Connolly capitalized on the opportunity, one-timing a Lukas Reichel feed into the back door of Eetu Makiniemi‘s crease. The goal signaled a significant change of momentum at 13:57 of the first period.

Down 2-1, the Hogs got back to even ground on the penalty kill. After being tagged with too many skaters on the ice, Rockford’s Ian Mitchell and Josiah Slavin dug a puck out the boards in front of the IceHogs bench. Slavin found Carson Gicewicz leaving the defensive zone to start an odd-man rush toward the Chicago net. Gicewicz returned the puck to Slavin at the left post; the resulting tap-in tied the game at two goals at 15:07 of the first.

Rockford came out in the second period with a bit more jump, matching the Wolves intensity and grabbing its first lead of the night midway through the frame. Alexander Nylander put back a rebound off of a Dylan McLaughlin offering 10:55 into the period to make it 3-2 Rockford.

Back came the Wolves, who tied the game on David Gust‘s fourth goal of the season. Gust finished off a quick-developing Chicago rush into the Hogs zone, sending a pass from Maxim Letunov from the right dot past Soderblom at the 12:21 mark.

The score remained 3-3 until the second minute of the third period. Issak Phillips got the game-winner started, tipping a pass into the Wolves zone before finishing his shift. Reichel chased the puck down behind the net before Wyatt Kalynuk won possession coming around the endboards. Kalynuk circled the Chicago net before threading a pass to Reichel, who guided the biscuit past Makiniemi 1:04 into the final frame to give the Hogs a 4-3 lead.

The Wolves pushed hard for the equalizer, but it was not in the cards. Rockford added empty-net goals from Evan Barratt and Garrett Mitchell in the final minutes to secure the victory.

“That’s how we have to play,” Sorensen said of the Rockford effort Friday. “I think our battle level, our compete level has to be at that standard every night. If we get the special teams going like we did tonight, we’re going to be in a lot of hockey games.”

Soderblom wound up stopping 31 of 34 shots on the night. It was all Rockford for the Three Stars, with Nylander (First), Reichel (Second) and Slavin (Third) earning the honors.

The Hogs now travel to Chicago to complete the weekend series. Puck drop at Allstate Arena is set for 7 p.m.