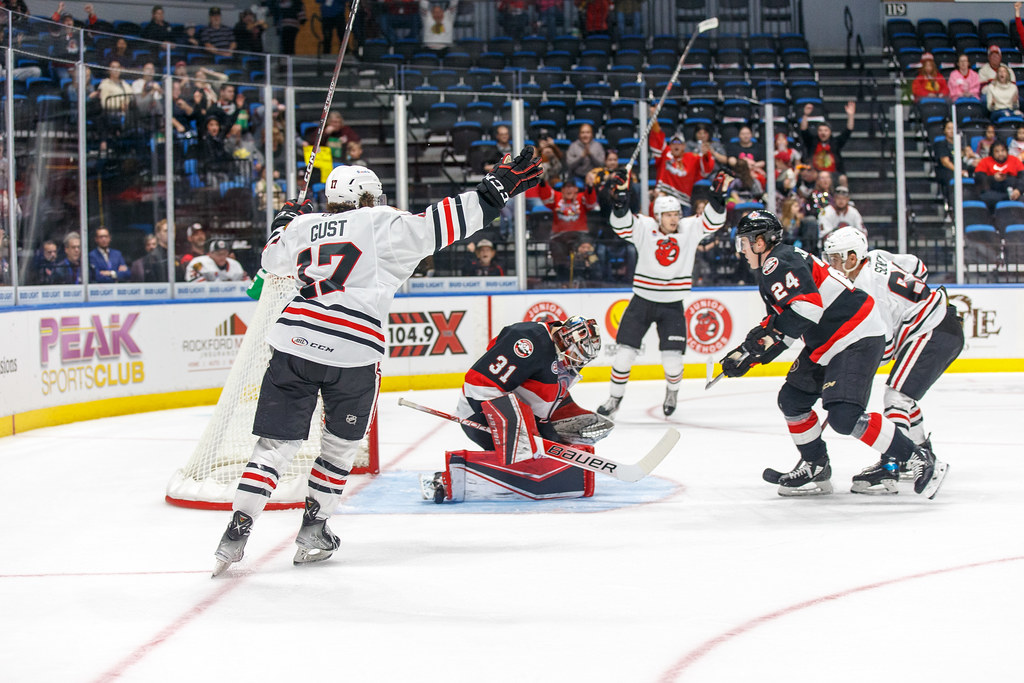 Rockford, Ill. – The Rockford IceHogs began the weekend as the 30th-ranked offense in the AHL. Following their evening against the Belleville Senators on Saturday, the IceHogs can expect to move up dramatically.

After scoring five times in a win over Chicago on Friday, Rockford erupted for eight goals at the BMO Center. Belleville was crushed for the second-straight night as the Hogs cruised to an 8-2 victory. Rockford wins its second-straight game, evened its record to 3-3 and put on an offensive display in front of the home crowd.

The IceHogs got to work early, scoring 51 seconds into the contest with Dylan Sikura‘s first goal of the season. Less than a minute later, Lukas Reichel worked a two-man rush with Brett Seney and scored from the right post to put the IceHogs up 2-0.

Sikura got his second of the night at the 11:36 mark of the first period, the first of what would be four Rockford power play tallies. The one-timer from the top of the left circle trickled through the pads of Senators goalie Kevin Mandolese, prompting Belleville coach Troy Mann to remove him from the game for Mads Sogaard.

Belleville, who was outshot 9-1 by Rockford, stopped the bleeding and went into the locker room down 3-0. Instead of a push back from the Senators, the Hogs turned the offense up a notch.

The middle frame was a wild affair that saw the following:

From there, it was mostly the teams trying to run out the clock and the officials trying to prevent garbage-time fights. Angus Crookshank converted on a power-play chance midway through the third to close out the scoring.

Rockford held the Senators to the Crookshank goal in eight Belleville chances. By comparison, the IceHogs were four-for-twelve on the night with the man advantage.

Belleville, who lost 4-2 at Milwaukee the night before, is now 3-4-1 on the season. They drop from first to fourth in the North Division standings. The Senators will have the week to lick their wounds before hosting Lehigh Valley on Friday.

Rockford, who had five players pot their first goal of the season this weekend, gets back to its Central Division slate with three home games this week. First up for the IceHogs is Milwaukee, who visits the BMO on Wednesday for a school-time special. The puck drops at 10:30 a.m. CDT.