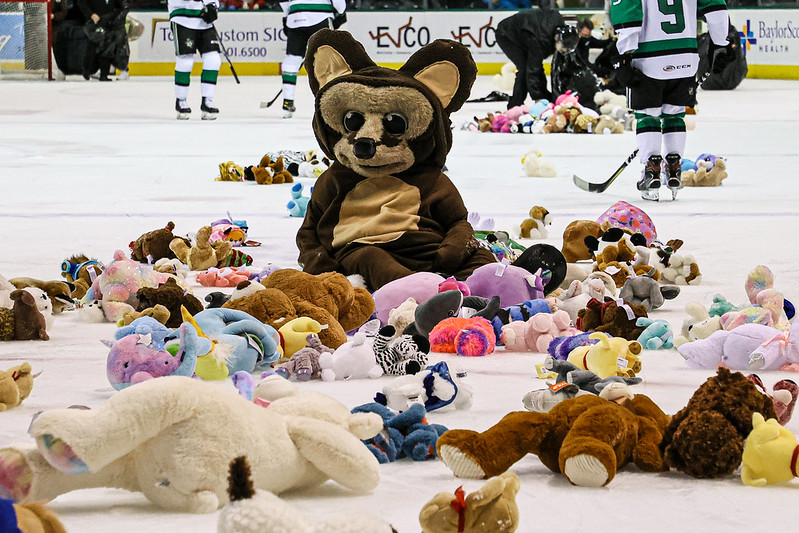 In what was the fourth game of the month-long occupation of the H-E-B Center, the Stars continued to slide Friday night

CEDAR PARK, Texas – The Stars returned to the action Friday night to continue their 11-game homestead. In what was the fourth game of the month-long occupation of the H-E-B Center, the Stars continued to slide with a 3-1 loss to the visiting Rockford IceHogs.

The Stars looked to be the better team in the opening frame. With an aggressive forecheck and a heavy presence, the elements were there for a strong start. However, the IceHogs were able to jump out to an early lead after Nicolas Beaudin sprang a break with an excellent stretch pass to Dylan McLaughlin who netted the opening goal on his team’s second shot. The IceHogs wasted no time in extending their lead. A similar rush chance allowed Alex Nylander to bury his 8th goal of the season and put the Stars in a deeper hole. Despite what could be considered a deflating 30 seconds of hockey, the Stars answered back less than 90 seconds later. Anthony Louis continued to show off his stick handling skills as he danced around a defender on the rush and fed Curtis McKenzie. McKenzie snapped a pass over to defenseman Ben Gleason who did his best Anthony Louis impression by dancing around the defender and firing a wrist shot past Collin Delia to cut the lead in half. The Stars continued to press for the equalizer, but were unable to capitalize on several high-danger chances at the Rockford net. As we approached intermission, the Stars continued to throw bodies into the glass and pucks at the net, building momentum going into the middle frame.

After the first intermission, the Stars tightened up defensively in an effort to negate some of the Rockford odd-man rushes. While the team’s intermission adjustment worked, the Stars continued to allow rush chances due to unfortunate rebounds and mistakes in their own zone. The Stars got a few opportunities to tie it up early in the second with a couple of power plays. Their first opportunity fell flat and saw them doing more killing than power playing as they allowed two solo rush opportunities for Rockford. Their second power play opportunity gave them the momentum shift they were looking for. Although failing to score on the man advantage, the Stars were getting in deeper and really giving Delia fits with several shots from close range. This surge didn’t last long however, and the IceHogs started to get set up in the Stars’ end. This was the first time all night that the IceHogs had extended zone time and it certainly frustrated the Stars. The Stars managed to survive with a mix of timely clearances and solid goaltending by Anton Khudobin, who was making his Texas Stars season debut. With time winding down in the period, the IceHogs continued to test Khudobin, but he remained steadfast and unfazed by the offensive attack of Rockford.

The IceHogs were on the power play to start the final period and used the man advantage to set up in the Stars zone early. With some impressive goaltending and defensive battling, the Stars escaped unscathed in what would normally be when they allowed a back-breaking goal. The Stars quickly found themselves down a man again, but remained perfect on the penalty kill thanks to a spectacular diving save with the paddle from Khudobin. The Stars went to the power play with just over nine minutes remaining in the third. They were able to get some testy shots on Delia, but were still unable to score the tying goal. Rockford continued to salt away the remaining time, killing off every Stars chance. With the goalie pulled in the final minute, an errant centering pass from behind the net slid 200 feet for an own goal to crush the any thought of a comeback.

Well, you don't see this every day. @goicehogs goaltender @__deals gets his first PRO GOAL! pic.twitter.com/ufltwV0i4P

The Stars did a good job adjusting after their initial game plan fell through. However, the IceHogs’ run-n-gun style offense proved too much to overcome as they were able to impose their style on the Stars defense. The Stars are better suited to be a forechecking team who can rely on goaltending to cover their mistakes. Unfortunately, the game plan hasn’t been working in their favor and they are struggling to find favorable results. Now dropping the first four games in an eleven game homestead, they are quickly finding themselves in a deeper hole as the season goes on. If there’s any hope left for reaching the playoff this season, it is dwindling.

The Stars will have an opportunity to right the ship on Saturday night when they will take on the IceHogs again in the finale of a two-game weekend series.