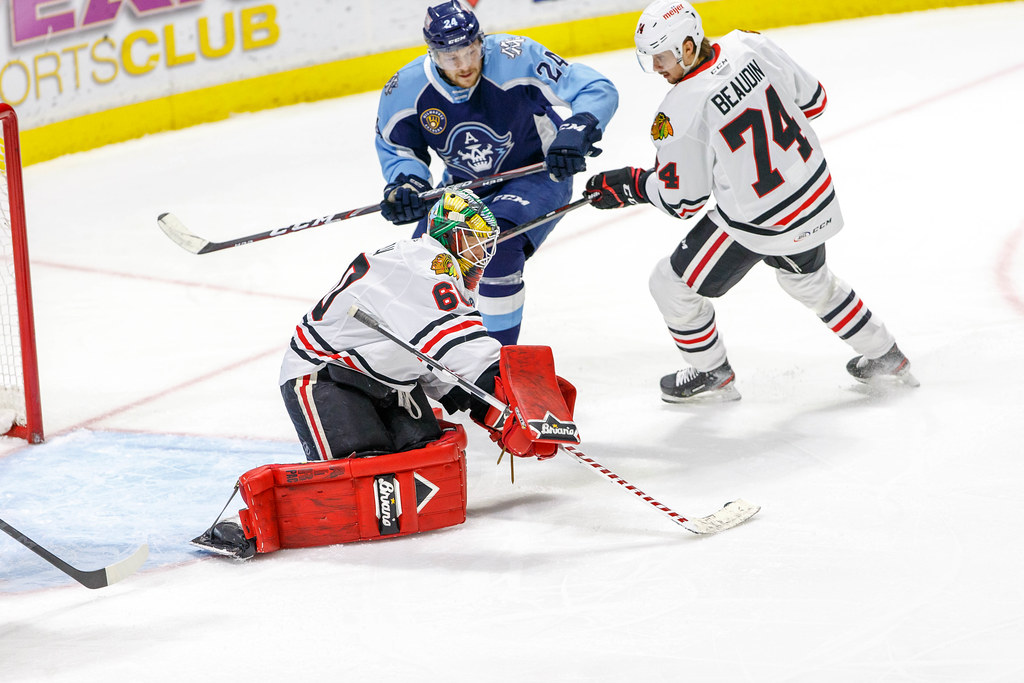 The Rockford IceHogs have clawed their way into respectability in the AHL’s Central Division behind vastly improved defensive numbers.

ROCKFORD, Ill. – The Rockford IceHogs have clawed their way into respectability in the AHL’s Central Division behind vastly improved defensive numbers. Despite a terrible start to the 2021-22 campaign, Rockford has put together a winning month of December by tightening up in its own end.

The IceHogs are 5-4 this month following Tuesday’s 2-0 loss to Milwaukee at the BMO Harris Bank Center. Rockford hits the holiday break on the heels of two frustrating losses. However, a more responsible approach in their own zone has the Hogs competing most nights.

“I think the guys are in a good place mentally,” said interim head coach Anders Sorensen to the media following Tuesday’s loss. “I think they feel like we’re playing well; we’re giving ourselves a chance in most of the games, started winning or getting points out of it. It’s not always going to go your way, but I feel like we’re on the right track here.”

Scoring goals has been a fairly consistent issue for Rockford this season. After being shut out for the second time in five games, the IceHogs are lighting the lamp at a per game average of 2.5o. That’s second to last in the league.

Rockford has been in the AHL basement for the bulk of the season with a 25.38 average in shots on goal. A 3-6-1 start to the season was the result of the Hogs giving up four goals per game and being overwhelmed in shot differential. On average, teams were out-shooting Rockford 37.4 to 21.5 a game.

The turnaround started with a 6-3 win over Chicago on November 19. The Wolves are 20-4-1-1 and running away with the Central Division heading into the holiday break. However, the IceHogs have handed Chicago three of its six defeats, including a 3-2 shootout win on November 20.

Starting with those two wins, Rockford is 8-5-0-1 with some dramatic shifts in some key numbers heading into the break. The IceHogs are still scoring at that paltry 2.50 clip, but have leveled the ice considerably over the last six weeks.

In those 14 games, Rockford has held opponents to 2.64 goals per contest. They’ve allowed 29.57 shots and taken 28.14 shots on average. A 3-1 win over the Admirals on December 1 marked the first time this season that the Hogs have out-shot an opponent. Rockford has done this six times in the last nine games and are 4-2 in those games.

The IceHogs have also made vast improvements on the penalty kill, with an 87.8 percent kill rate in December. That’s a ten percent jump from the first 15 games of the season. Rockford generated a lot of shorthanded offense on Tuesday as well as during last Saturday’s 3-2 loss in Texas despite not converting on those chances.

The poise in their own end has been noticeable in recent outings. The Hogs are limiting odd-man rushes and cleaning up loose pucks in the slot. Rockford is winning more battles and generally skating the puck out of its zone with some purpose.

In terms of building on recent success, it all comes back to putting pucks in the net. Rockford ran into a pair of hot goalies in the Stars Anton Khudobin and Milwaukee’s Connor Ingram. Still, there were opportunities for the IceHogs to score in both losses.

Rookie Lukas Reichel (8G, 6A) made his return from a concussion this past weekend and had a goal and assist in Saturday’s loss. Also returning after missing time was Dylan McLaughlin, who came out of COVID protocol and posted a goal in Rockford’s 3-1 win in Texas Friday.

Even Collin Delia, who has anchored the defense with solid play between the pipes, got in on the scoring action in Texas. Delia was credited with Rockford’s empty-net tally in the closing seconds of Friday’s win. He also had an assist in a 4-3 win over Iowa on December 8. However, depending on your goalie to fill the other team’s net won’t equate to long-term success.

The Hogs aren’t likely to keep the winning ways going with stretches of seven goals in five games, as has been the case for the last two weeks.

The IceHogs definitely have room to improve. However, Sorensen believes that his club is trending in an upward fashion.

“For the last couple of weeks here, I think we’re playing pretty good hockey,” he said. We’re getting some things that we work on in practice and that we’re watching on video. We’re getting through and the guys have responded. They’re really buying into some of those things and I think the results are showing on the ice.”

Once the schedule resumes in Grand Rapids on Monday, Rockford must convert on scoring chances on a more regular basis.