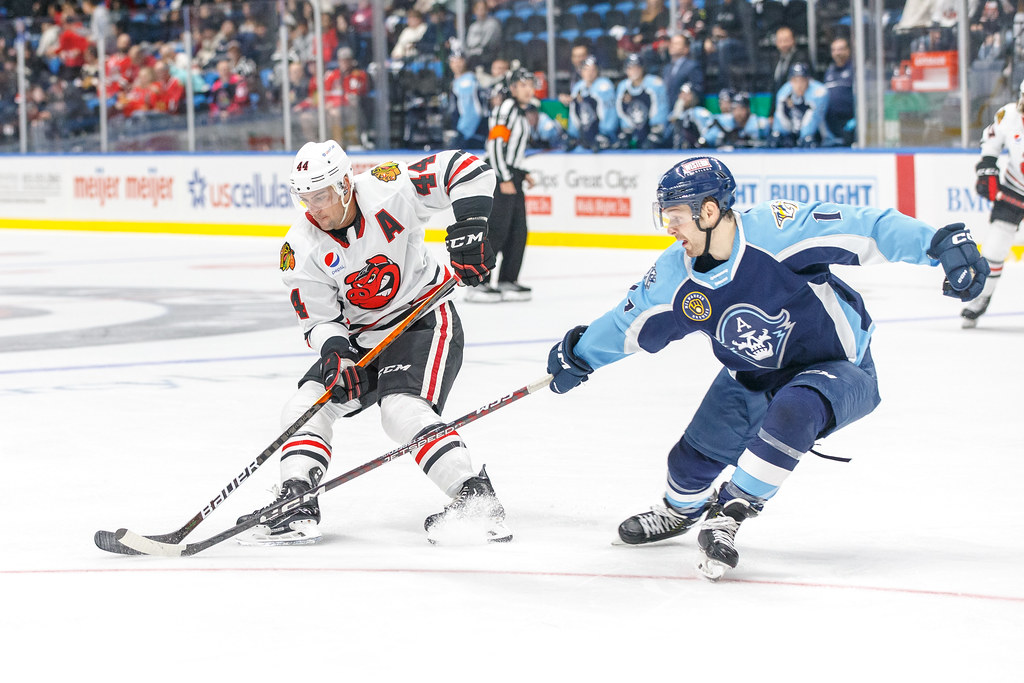 Adam Clendening picked up his first goal of the season for Rockford, who lost to Milwaukee Wednesday morning. (Photo by Todd Reicher/Rockford IceHogs)

ROCKFORD, Ill.– The Rockford IceHogs dug themselves into an early hole in a rare morning matchup with the Milwaukee Admirals. A three-goal deficit proved too much for the Hogs to overcome Wednesday at the BMO Center. Despite a late rally, Rockford fell to the Admirals 6-4.

“As crazy as it sounds, I saw some good things,” said IceHogs head coach Anders Sorensen said following the loss. “I thought there were a couple of shifts that hurt us. It put us on our heels a little bit.”

Milwaukee was able to jump on rookie goalie Mitchell Weeks to the tune of 17 shots and three goals in the opening period. Igor Afanaseyev opened the scoring with a snipe from the slot 6:39 into the contest when Rockford left the middle of the ice open.

Weeks suffered some bad luck later in the period, when a pass attempt by Phil Tomasino wound up striking the skate of Hogs center Lukas Reichel and sliding past the Rockford goalie for a 2-0 Milwaukee lead at the 12:55 mark. Cole Schneider made it 3-0 via a power-play goal 16:42 into the first.

“We didn’t help him in front of the net,” Sorensen said of Rockford’s play in front of Weeks. “I thought he made a first save and we’ve got to be better in those net front battles.”

Rockford was able to convert on an Admirals turnover to get on the board late in the opening frame. Josiah Slavin led the rush and found Buddy Robinson, who got the play started in the defensive zone, at the right post. The tap in got past Milwaukee goalie Yaroslav Askarov at 18:24.

The Admirals took a 4-1 advantage midway through the second period on Luke Evangelista’s second goal of the season. Again, the IceHogs responded late in the frame, with Adam Clendening one-timing a pass from Alex Vlasic past Askarov at the 18:16 mark.

A Reichel turnover led to a Juuso Parssinen backhander 4:56 into the third period. Down 5-2, Rockford put on a late rally behind a pair of David Gust tallies. The second, coming with Weeks on the bench in favor of an extra skater, pulled the Hogs to within a single goal with 2:28 left.

Sorensen brought Weeks back to the bench in an attempt to pull even, but Schneider ended Rockford’s comeback bid with an empty-netter with 58 seconds remaining. Still, Sorensen credited his veterans with spearheading the push.

“It’s their room,” he said about his leadership group. “We’re here to guide them, but it’s their room. I thought we showed fight all the way to the end. We scored two and it’s 5-4, we pull him (Weeks) again. We had some good looks to tie it, but we couldn’t do it.”

Weeks finished the night with 26 saves on 31 shots in his debut. Askarov stopped 29 shots to pick up his third win of the season. Rockford falls to 3-4 with the loss and will close out their homestand this weekend, starting Saturday night when they host Grand Rapids.

The Admirals (5-2) will head west for a two-game set in San Diego on Friday and Saturday.