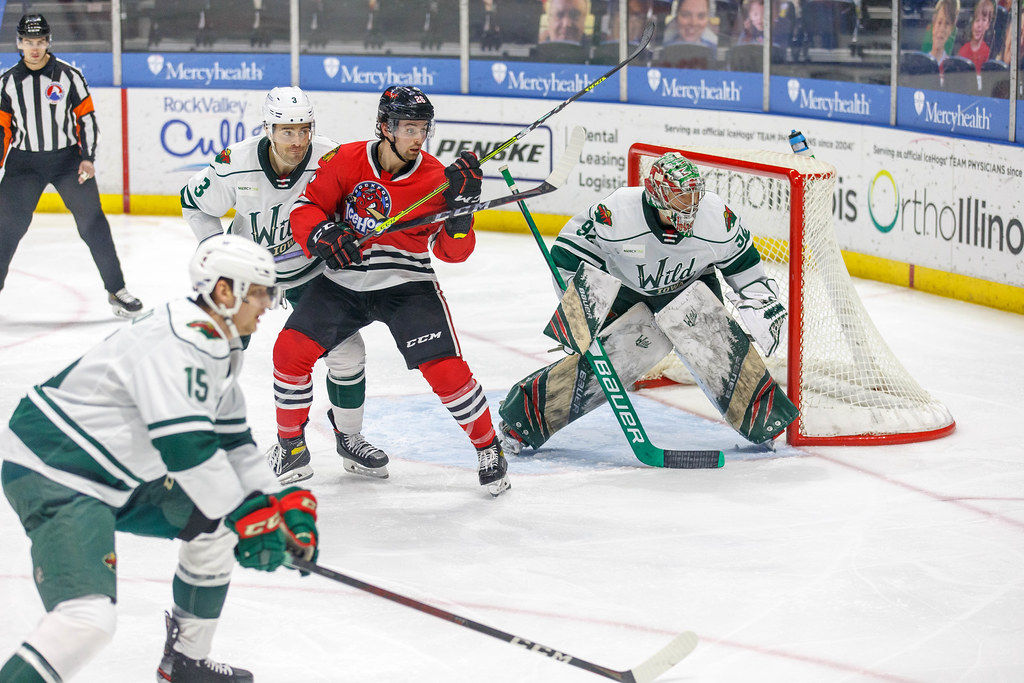 ROCKFORD, Ill. – The Rockford IceHogs finally have a winning streak going after a tough start to the 2020-21 campaign. A two-goal performance by rookie Andrei Altybarmakian was the difference in the IceHogs 4-3 overtime victory.

The see-saw contest at the BMO Harris Bank Center ended with the IceHogs sweeping Iowa in a two-game weekend set. Rockford, who trailed 3-2 after 40 minutes, won consecutive games for the first time this season.

Rockford got on the board 8:19 into the game on the first of Altybarmakian’s two goals. Taking a clearing pass from Dmitry Osipov, he motored up the left side and into the Iowa zone. Altybarmakian drove to the net and sent a backhand shot past Wild goalie Hunter Jones for a 1-0 IceHogs advantage.

The Wild took advantage of a cross-checking infraction by Riley McKay late in the opening period. Up until that point, Rockford had limited Iowa to a single shot on goal. The Wild tilted the ice toward the Hogs net and teed off, tying the contest at the 18:57 mark. Connor Dewar played catch with Calen Addison before sending the equalizer past Hogs goalie Collin Delia from the top of the left circle.

Iowa controlled the action for much of the second period. The Wild outshot Rockford 15-5 in addition to gaining the upper hand on the scoreboard.

The two teams traded goals early in the second. IceHogs regained the lead at the 2:35 mark, following an unsuccessful power play for Rockford. Isaak Phillips retrieved a clearing attempt, sliding the puck to Evan Barratt along the left half-boards just shy of the Wild blueline. Barratt skated into the offensive zone and blasted home the shot from the top of the left circle.

Less than two minutes later, Michael Krutil suffered a blowout as he was about to skate the puck past the red line. Iowa capitalized, attacking Delia’s net until Dewar was able to poke a loose biscuit into an open cage at 4:21 of the second period.

Successive penalties by Rockford garnered a two-man advantage for the Wild in the seventh minute. With MacKenzie Entwistle and John Quenneville in the box, Iowa took a 3-2 lead on a back-door conversion by Damien Giroux. The goal was set up by Addison and Mason Shaw 6:34 into the middle frame.

The IceHogs drew even with Iowa midway through the third period. Cole Moberg got the scoring play started with a shot on goal that Jones stopped. The rebound was controlled by Entwistle, who backhanded the puck to a crashing D.J. Busdeker at the left post. Busdeker collected the feed and made a deposit into the net just ahead of a diving Jones at 8:11 of the third period.

The score remained all square at three goals through regulation. Altybarmakian ended the contest in overtime with some strong skating with the puck. Fighting off Dewar around the end boards and back to the top of the Iowa zone, Altybarmakian made his way to the slot. He fired past Jones for the game-winner 1:16 into the extra session.

Delia picked up the win for the Hogs in net, with 27 saves on the afternoon. Rockford survived a futile day on the power play, going 0-5 while the Wild scored twice in four chances on the man advantage.

The Hogs rally overshadowed a three-point night for Addison (three assists), as well as the pair of goals by Dewar. Jones ended the night with 21 saves on 25 shots.

Rockford is off until Thursday night, where they wrap up a four-game homestand at the BMO against Grand Rapids. Puck drop is scheduled for 6:00 PM.