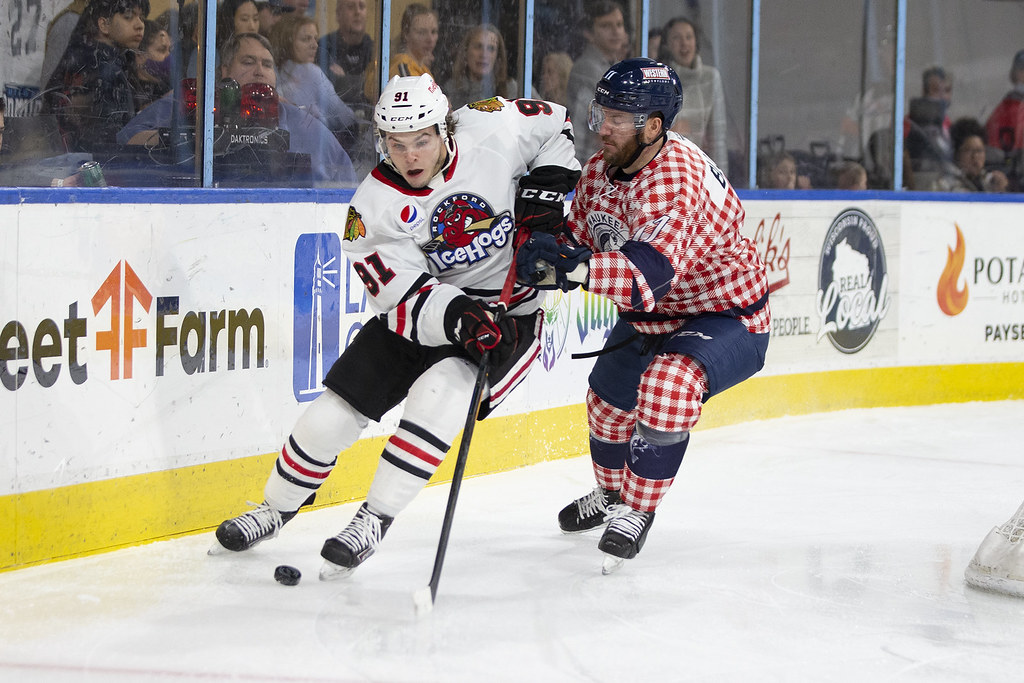 Milwaukee, Wis. — Michal Teply has developed a knack for shootout heroics. The Rockford IceHogs forward completed a comeback for his team against the Milwaukee Admirals Friday night.

Rockford beat the Admirals 4-3 in a prominent Central Division matchup. Teply’s shootout goal in Milwaukee put an exclamation point on an IceHogs rally from two goals down in the third period. The IceHogs broke a three-game skid with the victory, their seventh of the 2021-22 campaign in eight games decided by penalty shots.

“I don’t know if it’s a guarantee,” joked interim head coach Anders Sorensen to Hogs broadcaster Joseph Zackrewski after the win. “Obviously, Arvid (Soderblom) did a really good job, and those shooters did a good job as well. Teply’s got some different moves that he does, and obviously, it seems to be working.”

Rockford had to find a way to erase a 3-1 deficit as the teams entered the third period to get the game into extra skating. In the first twenty minutes, the two teams traded goals by Milwaukee’s Jeremy Davies and the IceHogs’ Evan Barratt.

Milwaukee built its two-goal advantage in the second on the power play. Davies picked up his second tally of the evening at 3:59. Rocco Grimaldi converted for his team-leading 26th goal of the season in the fourteenth minute.

The IceHogs used a power-play chance to ignite their third-period surge. Brett Connolly picked up a rebound from behind the goal line and banked a shot off Milwaukee goalie Devin Cooley at the 7:46 mark. A few minutes later, while on a delayed penalty, Mike Hardman redirected Teply’s shot attempt into the net for the equalizer.

Neither team could score in the remaining nine minutes of regulation or overtime to set up the shootout. Cooley stopped Connolly’s attempt before Teply burned him with a nice move to pull the puck back to his forehand. Soderblom, who made 30 saves on the night, denied Davies, Grimaldi, and Cody Glass to pick up his tenth win of the season.