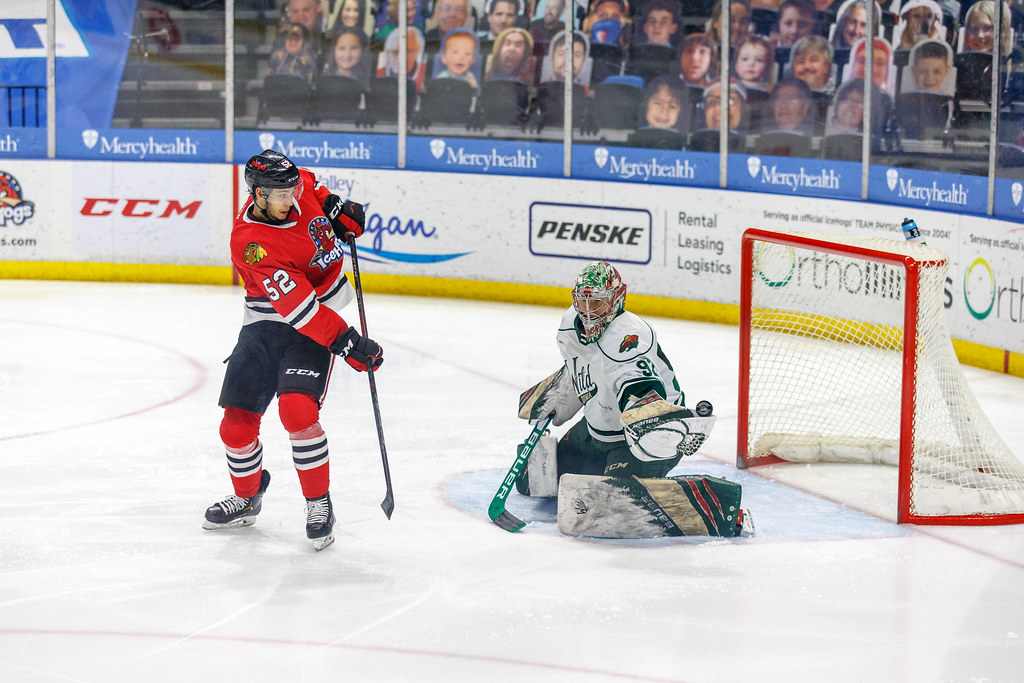 Reese Johnson was one of three IceHogs to post two goals in Rockford's 6-1 win over Iowa. (Photo by Todd Reicher/Rockford IceHogs)

ROCKFORD, Ill. – The Rockford IceHogs had five wins coming into Monday’s tilt with Iowa. The margin of victory in each of those games was a single goal. For the first time this season, the IceHogs were able to build a cushion against an opponent.

Rockford got two-goal performances from Reese Johnson, Chris Wilkie, and Nicolas Beaudin in a 6-1 rout of the Wild at the BMO Harris Bank Center. The offensive outburst was more than enough for rookie goaltender Cale Morris, who stopped 38 shots to pick up the win. Rockford moves to 6-9-1 on the season, splitting a two-game series against the Wild, who fall to 4-8-2.

The Hogs stormed out to a big lead in the opening minutes, scoring three goals on their first four shots of the game. The first strike came in transition after Issak Phillips sent a clearing pass to Wilkie. Leading a two-on-one rush, Wilkie hit Johnson for the one-timer from the left circle for a 1-0 lead just 2:24 into the contest.

Wilkie forced a turnover in the Iowa zone a few minutes later. Evan Barratt chased down the loose puck and passed it to Johnson, who brought it around the Wild net. Returning the favor to Wilkie, Johnson centered to set up the tap in, which came at 5:22 of the first.

Wilkie’s next goal came with Lucas Carlsson in the box for holding. Wyatt Kalynuk got the play started with a stretch pass to Wilkie coming out of the defensive zone. Wilkie worked a give-and-go with Dylan McLaughin, receiving the return pass and beating Iowa goalie Hunter Jones to the glove side at the 8:43 mark.

The Wild managed to cut the Rockford lead to 3-1 while on a two-man advantage. Gerry Mayhew snaked through the IceHogs defense and got a shot past Rockford goalie Cale Morris at 15:53 of the first period.

The IceHogs were able to restore a three-goal advantage late in the second period. The goal came on the power play after Wilkie drew a slash from Josh Atkinson. McLaughlin found MacKenzie Entwistle below the goal line. From there, Entwistle connected with Beaudin at the right dot. Beaudin brought the puck to his forehand and roofed it past Jones at 16:28 of the middle frame for a 4-1 Rockford lead.

The IceHogs prevented any pushback by Iowa by controlling the action in the third period. Late in the game, Tim Soderlund centered to Johnson, who potted his second goal of the night to make it 5-1 Rockford at 16:59 of the third. Moments later, Beaudin picked up his second of the evening with a long-distance shot past a screened Jones at the 17:29 mark to close out the scoring.

Morris was voted the game’s first star. He was followed by Johnson and Wilkie, each of whom had two goals and an assist. In addition to Beaudin’s multiple-point night, McLaughlin chipped in with two assists and is now on a four-game point streak.

The IceHogs are off the rest of the week before traveling to Hoffman Estates for the first of four straight games with the Chicago Wolves.