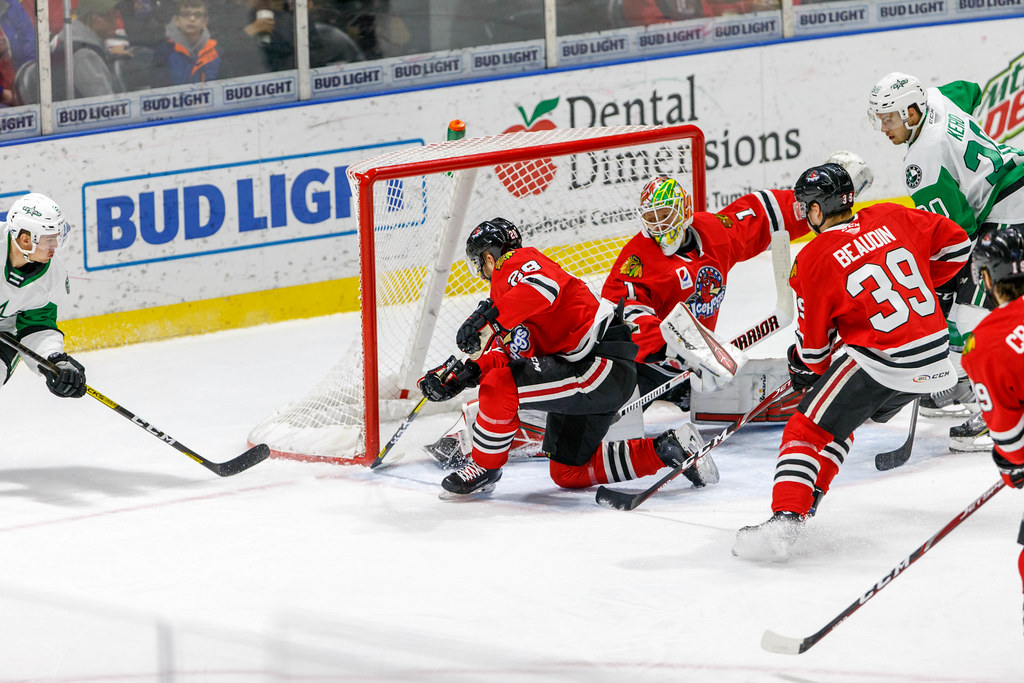 ROCKFORD, Ill. –The Rockford IceHogs are back on the road as updates to the BMO Harris Bank Center have the Blackhawks AHL affiliate living out of a suitcase for the third straight weekend this month. The next opponent for Rockford is the Texas Stars.

It’s been a while since these two teams have hooked up. The Hogs beat Texas 5-4 in Cedar Park on February 20, 2020. Few of the current Rockford players have game experience against the Stars. There are just six Hogs that can lay claim to having even been on the ice in this rivalry.

Texas and Rockford will clash eight times this season. Here’s a look at what will be looking across from the IceHogs Thursday night.

The Stars are coming off of a 6-2 win over Tucson Sunday night. Texas is 2-2 on the young season.

The Stars have ample experience upfront. Leading the way is captain Curtis McKenzie, who returns to Texas after stops in Chicago and Utica. He’s been a thorn in Rockford’s side for most of his nine-year pro career. Joel L’Esperance is back with the Stars after spending last season with the NHL’s Dallas Stars. Both players know how to put points on the scoreboard at the AHL level.

Last season’s leading scorer for the Stars, Riley Damiani (11 G, 25 A), joins McKenzie and L’Esperance to bring offensive punch to the Texas lineup. Former IceHogs forward Anthony Louis had 11 goals and 15 helpers for the Stars last season and is also back.

Thomas Harley (8 G, 17 A in 2020-21) and Ben Gleason (4 G, 13 A) return on the Texas blueline, joined by veteran pick-up Alex Petrovic. Petrovic has four seasons of NHL experience along with time with several AHL organizations.

Jake Oettinger has started all four of the Stars games in net. He’s been excellent, with a 1.79 goals-against average and a .949 save percentage. His backup, Colton Point, could also see action in one of the upcoming two games with Rockford. He has, on a prior appearance against the IceHogs, surrendered four goals in a 5-3 loss in Rockford back on October 13, 2018.

The Stars have been scoring at a paltry 2.25 goals a game, but also allow just 2.25 goals a game. The play of Oettinger has been key to the team’s success; he made 43 and 36 saves in his two victories.

Special teams would seem to heavily favor Texas. The Stars convert on 20 percent of their power play opportunities. The Texas penalty kill is second in the league with a 94.4 success rate.

Rockford is 1-3 after being swept in Iowa this past weekend. The IceHogs gave up eleven goals to the Wild and were outshot 84-42 in the two losses.

Injuries to several defensive prospects have left the IceHogs a little thin on the back end. Chad Krys was out last weekend with a knee injury. Alec Regula has yet to see game action with back issues. Cliff Watson, on an AHL contract with Rockford, was sent to the ECHL’s Indy Fuel on Tuesday, which could signal that some players are ready to return to action.

Rockford has three goalies on the roster. The Hogs will probably only bring two of them down to Texas. Based on the last two weekends, coach Derek King could be starting Malcolm Subban and Collin Delia in net against the Stars. Rookie Arvid Soderblom could replace Subban or Delia in that combination.

Currently, the Hogs are giving up five goals and nearly 38 shots a game, placing them near the bottom of the league in these categories. The IceHogs are last in the AHL in terms of getting pucks to the net (22 shots a game). That will need to change if they want to keep the action close in Texas.

Rockford has just one power-play goal on the season (6.7 percent) and has negated just 68.4 percent of the penalties they’ve committed. The Hogs have also surrendered two shorthanded goals. Limiting penalties and keeping the shorthanded time to a minimum couldn’t hurt Rockford’s chances this weekend.

The action gets underway in Cedar Park at 7:00 p.m. on both Thursday, October 28, and Saturday, October 30.