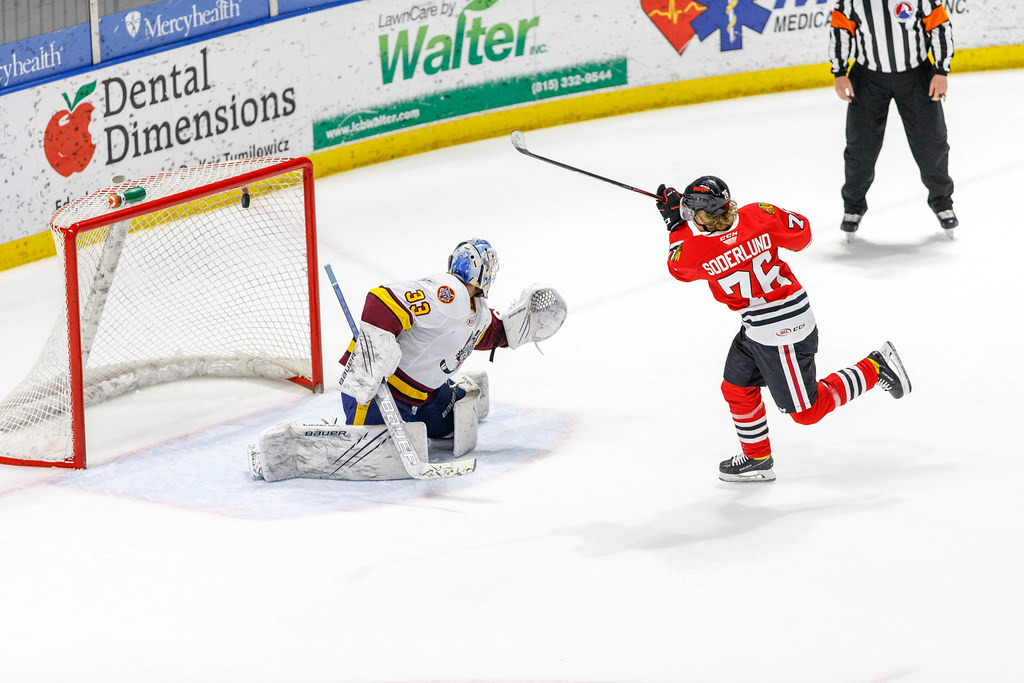 ROCKFORD, Ill.-The Rockford IceHogs outlasted their in-state rival Saturday night, rallying in the final minutes to claim a 4-3 shootout triumph over the Chicago Wolves. The win at the BMO Harris Bank Center is the IceHogs second in a row against the Central Division-leading Wolves.

D.J. Busdeker had a two-assist evening for Rockford (8-13-1) to go with 23 saves from Rockford goalie Ivan Nalimov. Cole Smith potted two goals for the Wolves, who drop to 15-4-0-2 on the season.

The IceHogs took advantage of a Wolves miscue to take a 1-0 lead 5:56 into the contest. Chicago defenseman Frederic Allard whiffed on a one-time attempt at the IceHogs blue line, allowing Busdeker to lead an odd-man rush the other way. Busdeker found Reese Johnson at the right circle; the resulting shot beat Wolves goalie Connor Ingram high to the glove side.

Chicago scored the next two goals of the game. Smith redirected a Joey Keane blast past Nalimov, who had lost his stick trying to handle a dump-in behind the net, to tie things at one at the 14:11 mark. The Wolves quickly picked up a power play after a cross-check by MacKenzie Entwistle. At 14:46, David Cotton put Chicago up 2-1 right off the faceoff with his eighth goal of the season.

Rockford was able to draw even late in the middle frame. Busdeker sent a shot to the Wolves net that Ingram appeared to handle. However, the puck came out and the Hogs rookie was able to regain possession. This time Busdeker sent a backhand attempt that glanced off of a Chicago defender and found Andrei Altybarmakyan at the right post. Altybarmakian shoveled the puck into the cage, making it a 2-2 affair at 15:47 of the second.

Chicago secured a late goal to regain the lead. Sean Malone brought the puck into the Rockford zone, skating around the net and back up to the left dot. A quick backhand pass to Smith in the slot resulted in a one-timer that beat Nalimov with eleven seconds left in the second period. The IceHogs entered the second intermission down 3-2.

The IceHogs pressed for the equalizer for most of the final period. It would not come until the final minutes, with Nalimov on the Rockford bench in favor of an extra skater. Brandon Pirri hustled to beat a Wolves defender to a pass attempt by Cody Franson at the right circle before threading a pass of his own to Entwistle in the slot. Entwistle stickhandled to the net, only to see his initial shot stopped. Gathering in the rebound, Entwistle sent a shot off the back of Ingram. The puck caromed into the air in front of the crease. Smith attempted to knock it down and inadvertently batted it into the Chicago net with 2:11 remaining in regulation.

After a scoreless overtime session, it would come down to penalty shots. Tim Soderlund and Pirri drew cord for the IceHogs, while Nalimov denied Patrick Harper and Cotton to earn Rockford the victory.

David Warsofsky added a pair of helpers in the losing effort for Chicago. Ingram posted 37 saves for the Wolves.

Chicago and Rockford clash again on Wednesday night at the Wolves practice facility in Hoffman Estates.