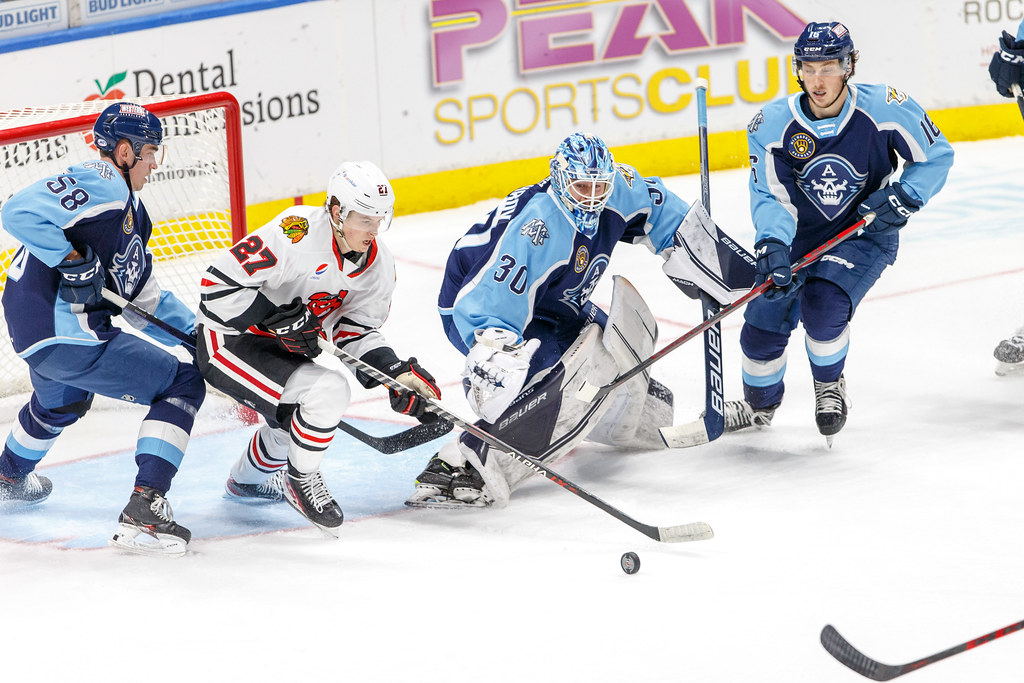 ROCKFORD, Illinois-The Rockford IceHogs will be closing out a season-long seven-game homestand this weekend as it’ll get its first look at two Central Division rivals this fall in the Grand Rapids Griffins and the Iowa Wild.

The Wild topped the Griffins 6-3 in DesMoines Thursday. The two teams will rematch Friday before coming to visit Rockford with Grand Rapids in town on Saturday night and Iowa on Sunday afternoon.

The IceHogs are coming off a 6-4 loss to Milwaukee on Wednesday morning, so they should have fresh legs as they prepare to renew two season series with two familiar opponents.

Reichel Hopes To Bounce Back

Lukas Reichel (4 goals, 6 assists) may be motivated to have a big weekend after a rough morning in Wednesday’s loss. Reichel was a minus-four for the game and was held off the scoresheet for just the second time in seven games this season.

A Reichel turnover led to a Milwaukee goal Wednesday. There was also an Admirals pass that glanced off his skate and into his own net. That was some poor luck, but Reichel still wasn’t happy about his performance in the game.

That sentiment was echoed by his bench boss.

“I just didn’t think he (Reichel) had the compete level that we expect from him,” IceHogs head coach Anders Sorensen said. “I think he’s improved in that area, but (Wednesday) was a couple of steps back, unfortunately.”

Rockford is a tad thin in net coming into the weekend. Jaxson Stauber is recovering from an injury suffered on October 29 in Rockford’s 8-2 win over Belleville. Sorensen thought that Stauber could be nearing a return, but there is no definite word on the rookie’s status for the weekend.

Injuries with the NHL parent club, the Chicago Blackhawks, resulted in Dylan Wells being signed to an NHL contract. Who’s left in Rockford to tend the goal? Mitchell Weeks was called up from the ECHL’s Indy Fuel on Monday and gave up five goals to the Admirals on Wednesday.

That same day, Rockford signed Owen Savory to a PTO. The former U-Mass-Lowell goalie served as the backup to Weeks and may have to see action this weekend.

Gust Honored By The AHL

David Gust (5 G, 8 A) was named the Howie’s Hockey Tape/AHL Player Of The Week on Monday for his seven-point performance last weekend. Gust currently leads the AHL in scoring with 13 points after potting two goals in Wednesday’s loss.

“I’m really impressed with all the details in his game,” Sorensen said of Gust, who was signed by Rockford in the summer. “Even the little things. His second effort, the way he stays on pucks. The way he anticipates on both sides, defensively and offensively. I’m really impressed.”

Sorensen pointed out that Gust brings a competitive fire in his own style of play.

“I think sometimes when you talk competitiveness, people think it’s just running around and hitting a bunch of guys,” Sorensen said. “For not the biggest guy, he plays through hands, he plays on the inside a lot. He wins a lot of battles on the yellow and he sets a really good example for the young guys.”

On Monday, defenseman Alec Regula was recalled to the Blackhawks. Regula contributed a pair of goals in his four-game stint in Rockford.

Grand Rapids is at the BMO Center Saturday night for a 7:00 p.m. CST puck drop. The following afternoon, the IceHogs play host to Iowa at 4:00 p.m. CST.