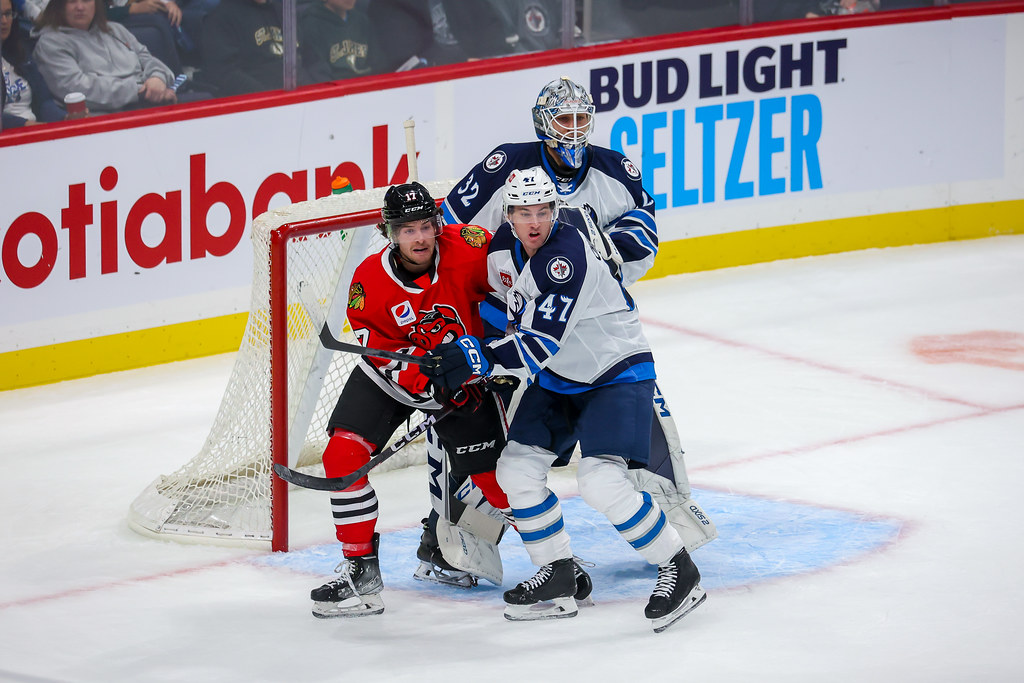 WINNIPEG, Manitoba-The Rockford IceHogs took a while to develop chemistry in their season opener in Manitoba Saturday afternoon. When they figured it out in the offensive end, it was in a big way.

Trailing 3-0 entering the third period, the Hogs went on a tear, tying the game twice to send it into overtime, then capping an epic comeback with a Brett Seney goal to prevail 5-4 over the Moose.

For most of the first 40 minutes, it was Manitoba who controlled the action. The Moose played like a team that was returning a host of key skaters from last year’s Central Division runner-up. Leon Gawanke opened the scoring 2:54 into the game with a long-distance point shot. Daniel Torgersson and Chaz Lucius tallied 1:47 apart in the middle of the second period, and it didn’t look to be Rockford’s day.

Things turned around early in the final frame. Luke Philp one-timed a long backhanded pass from Nicolas Beaudin at the left post to get the Hogs on the board at the 1:24 mark. At 7:36, Lukas Reichel hit David Gust coming into the Manitoba zone. With a flick of the wrist from the left circle, Gust cut the lead to a single goal.

Just 25 seconds later, Cliff Watson forced a turnover just inside the Hogs blueline and sprung Reichel for a breakaway goal past Moose goalie Arvid Holm, tying the contest at 8:01 of the third period. Manitoba righted the ship just seconds later when Kristian Reichel sent a shot off of the skate of Rockford’s Adam Clendening and past Hogs goalie Arvid Soderblom.

However, the IceHogs still had time for a response.

Bringing Soderblom to the bench with over two minutes to play, Rockford head coach Anders Sorensen saw the move pay off almost immediately. Reichel sent a shot to the Manitoba net. Philp got a piece of it, sending it past Holm and into the goal with 2:04 remaining in regulation.

A late scoring chance by the Moose was reviewed before overtime at the request of Manitoba coach Mark Morrison. The ruling of a no-goal from minutes earlier held up, and the 3-on-3 began. Just 1:24 into the extra session, Seney found a sliver of open net just above Holm’s shoulder. Firing from the bottom of the left circle, Seney brought the game to an end in favor of the IceHogs.