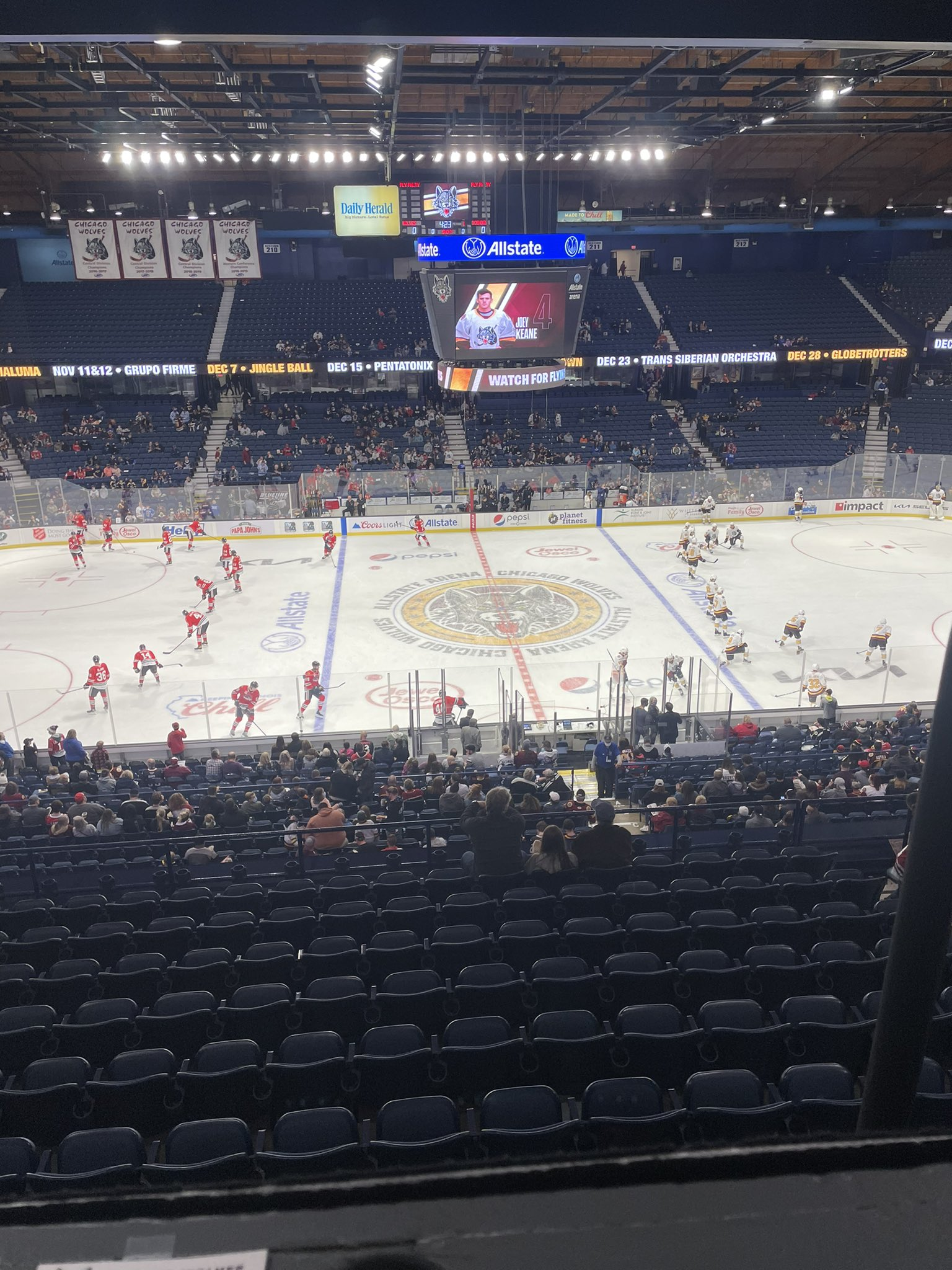 ROSEMONT, Ill. – Saturday night’s home opener marked 587 days since the Chicago Wolves last played host in Allstate Arena following COVID-19 stoppages and their temporary transfer to their practice facility at the Triphahn Center in Hoffman Estates. Wolves fans came in droves, packing the stands of Allstate with a final count over 8,000 in anticipation of their first true home game in 19 months.

“To be in a building like this and have that kind of energy it makes the game more fun to play.” Captain Andrew Poturalski said. “It’s definitely great to have them back.”

Their opponent would be a familiar one – of the 33 games played last year; the Rockford IceHogs made up a third of those with 11 contests with Chicago. The Wolves feasted on Hog last season, putting up an 8-2-1 record against their interstate rivals. With another heavy helping of Rockford on the schedule, the Wolves would look to set the tone early for this season in the race for another Central Division title.

In net for the Wolves was recent free-agent signee Alex Lyon, who had spent the last five seasons in the Philadelphia Flyers organization. Facing off against him in the other crease was relatively unknown Arvid Soderblom, another recent signee from overseas in Sweden who would be making his North American debut on Saturday night.

The pregame show was electric, and fans were loud and involved from before the anthem on out. After the last year and a half, there was finally hope for normalcy in the hockey world. The puck could drop on a new season with new hopes and new aspirations for a Chicago Wolves team many had picked to finish near the top of league standings.

Early on, the Wolves would be buzzing in the Rockford end, testing the IceHogs and Soderblom with extensive, lengthy offensive zone possessions that would yield quality scoring chances for the home team. Eric Gelinas and CJ Smith would have the best looks for the Wolves but were denied by Soderblom, and going the other way, Rockford would catch the Wolves in a quick transition that would force Lyon to make his first big save on the rush, diving forward to sweep away a loose puck from an IceHog crashing the net for a sure goal.

A couple of Rockford penalties gave Wolves fans their first look at Jack Drury, a highly-touted prospect drafted by Carolina in the 2nd round of the 2018 draft. Drury and Smith were able to attack the Rockford penalty kill effectively, but again were stuffed by Soderblom.

The Wolves were all over the IceHogs through 20 minutes, outshooting their rivals 16-3 in the opening frame, but were stymied by the spectacular goaltending on the other side. A poor decision by Rockford’s Jakub Pour to shoot the puck at Lyon after an offside whistle would allow the Wolves to start the second with the man advantage.

That decision would prove costly for the IceHogs, as newly appointed captain Poturalski would find Smith streaking into the slot with a perfectly threaded pass. Smith would drag the puck and fire a shot past Soderblom’s blocker for the first goal of the new season and a 1-0 lead for Chicago just 18 seconds into the middle frame.

Rockford would get their own look on the man advantage with Stefan Noesen sitting for holding. Alex Nylander would get a golden look from the right faceoff circle, but Lyon was able to cut the angle down aggressively to stop it. Ryan Suzuki would sweep in on the boards to intercept a Soderblom pass and create a shorthanded chance for Josh Jacobs on the next shift. While Soderblom stopped the initial shot, Suzuki cleaned up the rebound for his first of the year, extending the Wolves’ lead to 2-0 with an electric celebration to follow.

The rest of the second period, however, would be all IceHogs. A turnover created at the Chicago blue line would leave Evan Barratt all alone, and he would beat Lyon cleanly to cut the Wolves lead in half. That lead would evaporate entirely a few minutes later as Lukas Reichel streaked down the right side with a step on Jacobs, cut in front of the net, and lifted a shot that Lyons’ glove only got a piece of. Before Chicago could catch their breath, just over a minute later, Brett Connolly finished off a 2 on 1 rush to give the IceHogs their first lead of the game.

Chicago would end the period on the man advantage with another flurry of opportunities, but Soderblom again stood tall in the face of a heavy workload. Despite outshooting Rockford 31-15 after forty minutes, the Wolves trailed 3-2 and had to turn their play around quickly if they wanted to deliver a win in front of their fans.

Where Chicago carried the pace of play for the first period and a half, the third was a much uglier story as Rockford dominated possession against a Wolves team that struggled to find their feet. The Wolves found themselves chasing and out of position. Five minutes into the period, a pinch by the far side defenseman left Nylander on a breakaway all alone on Lyon, and a backhand forehand move to tuck the puck in extended the Rockford lead to 4-2.

The IceHogs refused to lean back on their lead and continued to put the pressure on Chicago. Lyon was forced to make back to back sprawling stops on 2 on 1 rushes, and for a team that was so steady last year in taking care of the puck, the Wolves were very uncharacteristically leaving their goalie out to dry in his net for the whole of the second half of this game.

Yet another IceHog minor penalty would breathe some life into the Wolves, however, and a great passing play from Josh Leivo to Dominik Bokk would find Gelinas, who would make no mistake in beating Soderblom low. With 5:46 to go, the Wolves were in striking distance.

Unfortunately for Chicago, they would continue their social distancing measures from the back of the net. With Lyon pulled, the Wolves struggled even to enter the neutral zone, and when they tried to attack the IceHogs zone, they were quickly turned away to spring Nylander in alone on the empty net, and he would ice the game with his second of the night. The 5-3 score would hold up as the final for the Wolves’ home opener.

Certainly must be disappointing for Wolves fans to lose their opener. The first half of this game was vintage Wolves – puck possession, tenacity in the offensive zone, and not giving their opponent any room to breathe. The second half was not quite the same, but it’s way too early for Wolves fans to hit the panic button. The roster turnover with the Milwaukee return is sizable, especially as the game wore on, it was widely noticeable that many of these players were up to game speed with one another for the first time and needed to jell. Still, Head Coach Ryan Warsofsky was also adamant about the necessity to play a full game.

The Wolves don’t play again until October 22, where they have a home and home next weekend with their former teammates in the Milwaukee Admirals. Milwaukee celebrated their triumphant return after opting out of last season with a 7-3 win over the Grand Rapids Griffins.