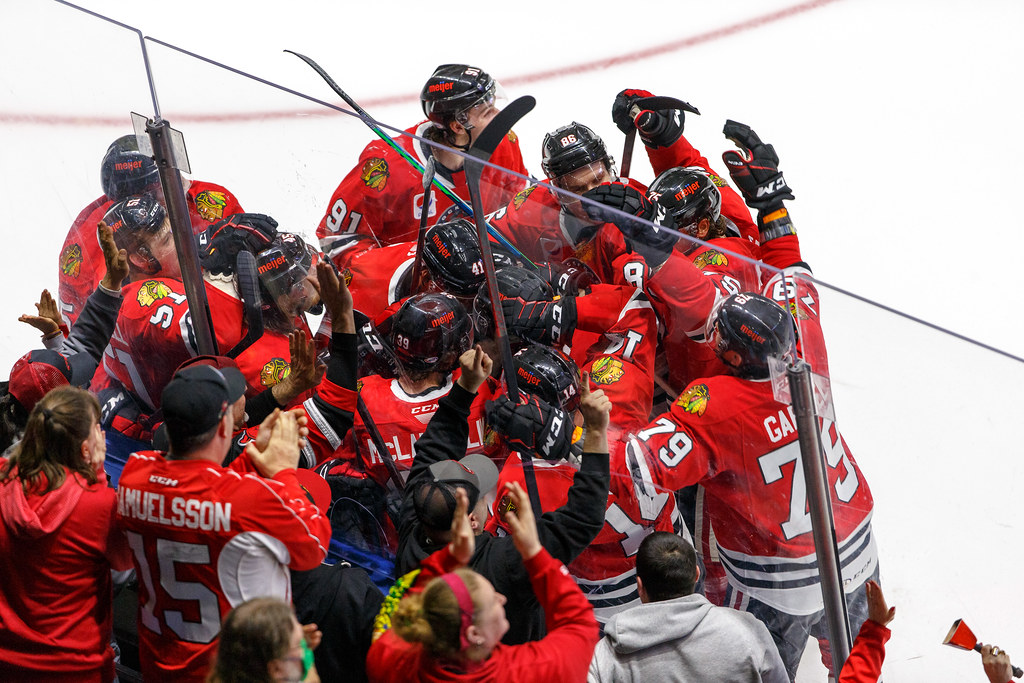 Dylan McLaughlin is mobbed by his fellow Rockford IceHogs after his overtime goal gave his team a series win over the Texas Stars. (Photo by Brad Repplinger/Rockford IceHogs)

ROCKFORD, Ill.– Arvid Soderblom and Dylan McLaughlin were named Co-MVPs of the Rockford IceHogs last week at the close of the regular season. Both players figured heavily Friday night at the BMO Harris Bank Center in Game 2 of the Central Division Quarterfinal with Texas.

Rockford won Game 2 1-0 to complete a two-game sweep of Texas in the play-in round, following a 2-1 besting of the Stars in Game 1 of the series Wednesday night. The IceHogs won the right to take on top-seeded Chicago in a best-of-five series that begins on Thursday, May 12 in Rosemont.

“It feels amazing,” McLaughlin admitted to the media following the win. “I think we deserved it; it was a great play by Mitchy (Ian Mitchell) and Philly (Issak Phillips) up top there, and then it wouldn’t have gone in without Cam (Morrison) and Carson (Gicewicz) in front, there. Just a credit to those guys and it was a good battle with Texas. We’re just super pumped right now.”

McLaughlin’s first goal of the playoffs came from the top of the left circle, which is where he wound up after receiving a pass from Phillips. The shot got over the glove of Stars goalie Matthew Murray, who was screened on the play by Morrison and Gicewicz.

The goal set the crowd of 5,327 into a frenzy as Rockford capped off a tremendous defensive effort against Texas, who dominated play for large stretches of regulation. The Stars came out smoking in the opening period, out-shooting the IceHogs 16-3. Rockford was on its heels for most of the first two periods.

On a night where Murray stopped 31 of 32 shots, Soderblom was just a bit better. The Hogs rookie sent away 36 Texas shots, most coming in the first 40 minutes.

“Sodi (Soderblom) has been a rock back there all year,” McLaughlin said of his goalie, “and he just continues to do it every game. We feel really confident with him back there.”

Despite the Wolves position as the top seed in the division, the IceHogs won eight of twelve meetings with Chicago in the regular season. Rockford will come into this series with equal parts momentum and confidence.

“It’s going to be a fun one, hopefully,” McLaughlin said of the next series with the Wolves. “That’s a great team, obviously, with some great players. We got some wins against them in the regular season, but it’s just going to be a whole other beast in the playoffs. We have a few days until we play them, so we’ll take that time and get ready for it.”