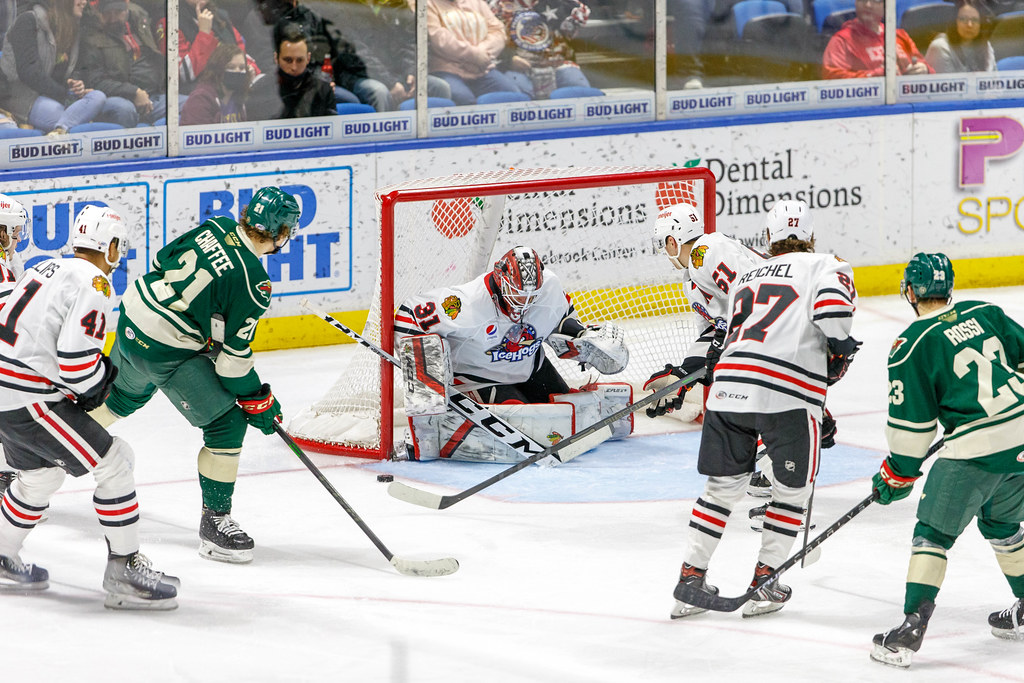 IceHogs Struggle In Loss To Wild

Cale Morris had a rough night in his return for Rockford. The Hogs lost 4-2 to Iowa Saturday. (Photo by Todd Reicher/Rockford IceHogs)

IceHogs Struggle In Loss To Wild

ROCKFORD Ill.– Goalie Cale Morris made his return to AHL hockey Saturday night after nearly two months without game action. In just his third appearance of the season for the Rockford IceHogs, Morris struggled to knock off the rust from his stay on the Blackhawks taxi squad.

Despite controlling large chunks of the action against Iowa at the BMO Harris Bank Center, Morris and the IceHogs dug a four-goal hole in the first 50 minutes of play. Rockford responded late with a pair of goals but still wound up on the short end of a 4-2 decision.

Mason Shaw and Marco Rossi each had two-point nights to pace the 19-17-2-2 Wild, who reclaimed third place in the Central Division with the victory. Rockford (17-16-3-1) returned to the fifth spot in the division standings.

The Hogs defense prevented the Wild from high-danger looks for most of the evening. Rockford was aggressive and active in the offensive zone early but trailed 1-0 after the first period despite out-shooting Iowa 10-5.

The Wild jumped on the train of opportunity late in the period when Kyle Rau got a stick on a rebound left by Morris on a Dakota Mermis shot. After continuing to pressure Iowa goalie Zane McIntyre, the wheels came off in the last ten minutes of the second stanza as the Wild lit the lamp three times.

The first blow came when Rossi sent a laser of a shot past Morris at the 11:38 mark. Iowa broke the game open in the latter stages of the second. Shaw scored from the left post at 16:27 on a Wild power play after Morris lost the puck out of his glove.

Less than a minute later, Rossi picked the pocket of Hogs forward Chad Yetman as he attempted to skate the puck out of the Rockford zone. A quick pass to Mitchell Chaffee in the slot resulted in a shot over the glove of Morris for a 4-0 Iowa advantage.

The IceHogs rallied in the third, getting goals from Issak Phillips and Alec Regula midway through the third. However, it was too little, too late for Rockford.

Morris, who was pulled for an extra skater for the last five minutes of the game, stopped 18 of the 22 shots he faced. In the opposite goal, McIntyre made 35 saves to pick up his eighth win of the season.

Iowa has a few days off before resuming its schedule Thursday in the first of two home games with Grand Rapids. Rockford is next in action Friday, it hosts the Chicago Wolves.