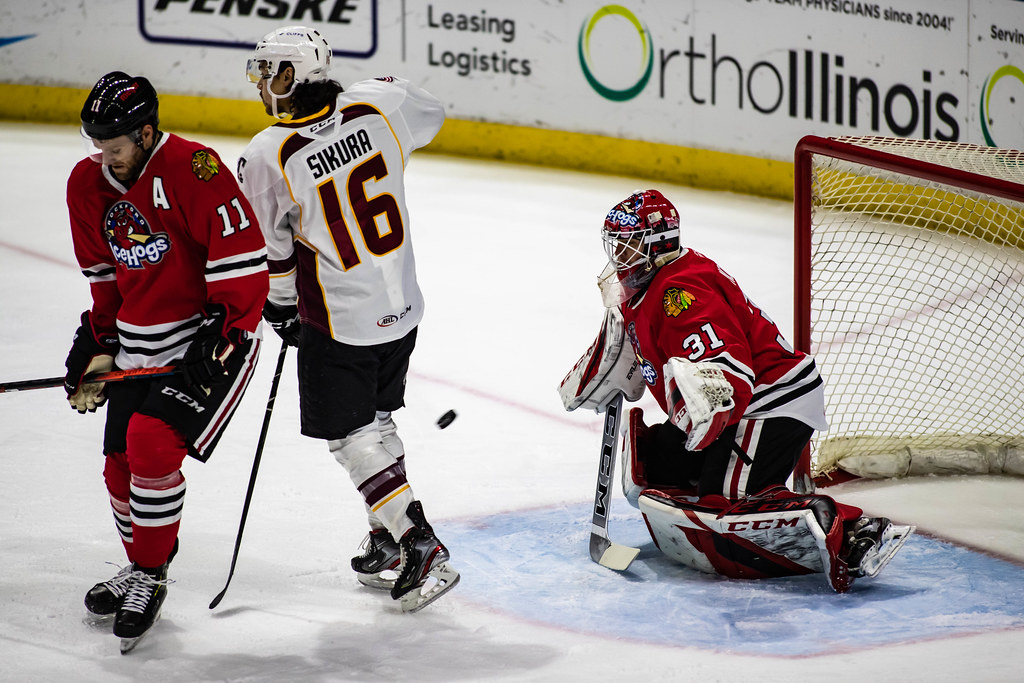 Tyler Sikura had a pair of assists in his first meet-up with his old team in Cleveland's 7-3 win over Rockford. (Photo by Nathan Vestal/Rockford IceHogs)

ROCKFORD, Ill. – The Rockford IceHogs are having trouble starting games. Monday was no exception in the first of a back-to-back at the BMO Harris Bank Center. By the time the sleepy piglets woke up, the visiting Cleveland Monsters were on their way to a 7-3 rout.

The Hogs quickly fell behind 3-0 to Cleveland, who picks up its first win of the season. Rockford falls to 0-5-1 to begin the 2021 campaign.

The Monsters roared out to an early 2-0 lead after Zac Dalpe lit the lamp twice in the first five minutes. Dalpe was set up for the opening goal by former IceHogs captain Tyler Sikura at 4:15 into the first period. Slipping past Rockford defenseman Issak Phillips, Dalpe one-timed the Sikura feed into the basket from the right post before Hogs goalie Matt Tomkins could close the door.

On the subsequent faceoff, Sikura got another scoring play started with a pass to Trey Fix-Wolansky. Dalpe was at the left post to double the Cleveland advantage at the 4:26 mark.

Monsters defenseman Wyatt Newpower hit Carson Meyer with a stretch pass just two minutes later as Meyer entered the Hogs zone. Meyer split the defense and fired past Tomkins to give Cleveland a 3-0 lead 6:26 into the first.

Rockford got back in the game on the penalty kill. Cleveland goalie Brad Thiessen misplayed a puck behind his net, allowing Mitchell Fossier to gain possession of the biscuit. Fossier found Chris Wilkie crashing the net. His shot banked off the diving Thiessen and into the goal at 8:04 of the first to cut the Monsters lead to 3-1.

Rockford closed to 3-2 after some hard work by MacKenzie Entwistle to chase down a loose puck behind the Cleveland net. Entwistle hit Brad Morrison at the left dot. The shot from Morrison whizzed over Thiessen’s glove for the goal at the 10:53 mark.

The goals just kept coming for the Monsters in the middle frame. Fix-Wolansky used a Sikura screen of Tomkins to fire in a power-play strike at 4:37 to make it 4-2 Cleveland. A Meyer shot off a faceoff win slipped under the pads of Tomkins at 5:28.

The IceHogs gained a power-play opportunity when Cleveland was nabbed for too many men on the ice. However, Justin Scott swiped the puck from Cody Franson in the first seconds of the man advantage. The shorthanded goal came past the beleaguered Tomkins’ glove side for a 6-2 Monsters advantage at the 10:28 mark.

Cale Morris relieved Tomkins to begin the third period. The Hogs got the final frame off to a promising start when Fossier forced a turnover in front of the Monsters net. Thiessen couldn’t keep the shot out of the cage. Nine seconds into the third, Rockford cut the lead to 6-3.

Morris stopped the first 13 shots he saw as Cleveland kept the Hogs pinned down in their own end most of the third period. The Monsters tacked on a final goal at the 17:07 mark when Nathan Gerbe one-timed the setup by Fix-Wolansky from the right dot.

Tomkins wound up with the loss, giving up five goals on 23 shots. Thiessen stopped 29 of 32 Rockford shots. In all, Cleveland sent 37 shots to the IceHogs tandem in net.

The two teams get right back to it on Tuesday in the second of the two games in Rockford, beginning at 6:00 p.m. CT.