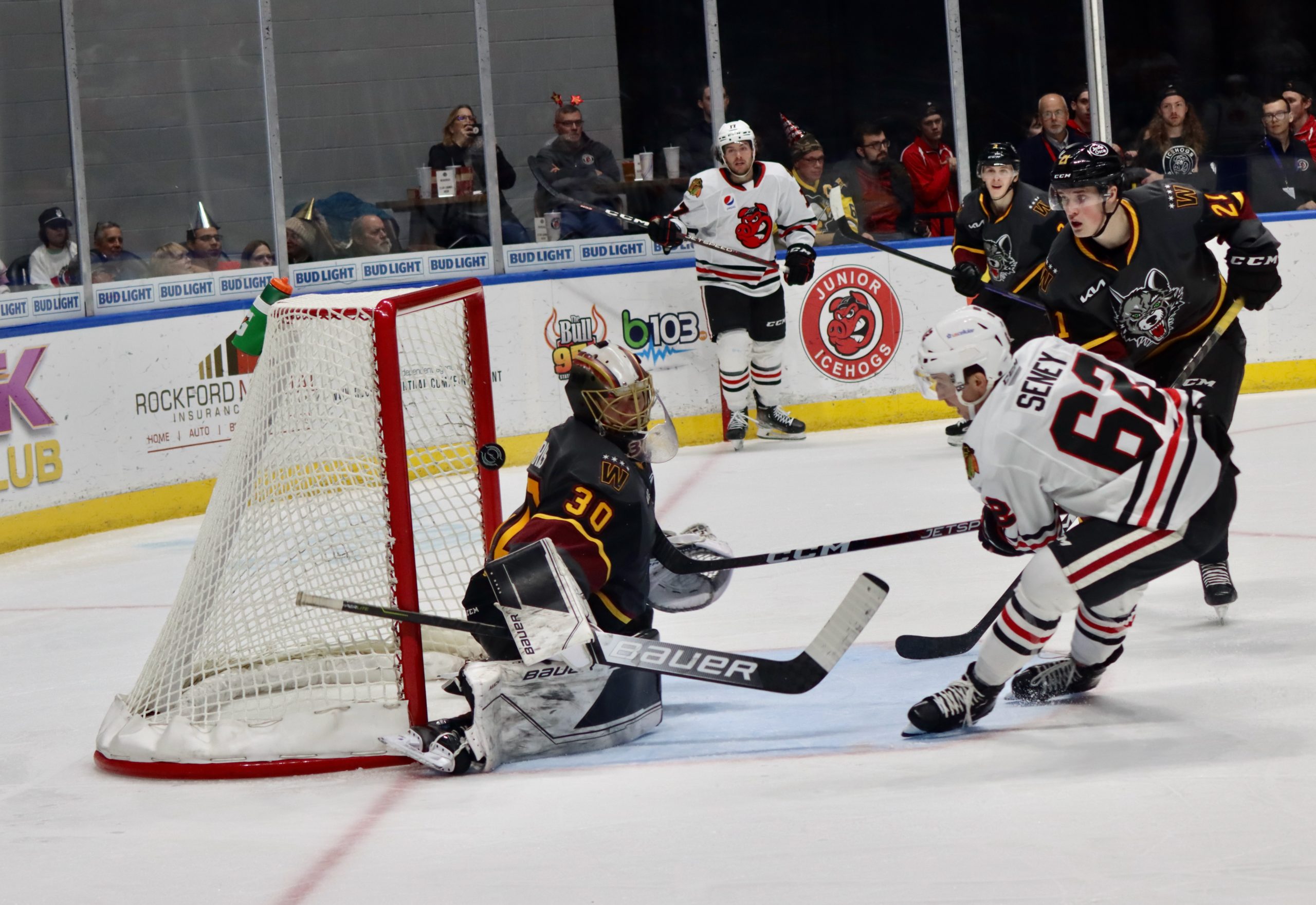 #AHL | The @goicehogs will pay a visit to the @IAWild this weekend without two of their top scorers. In their absence, other skaters will have to step up to replace them. @FPHIceHogs discusses who those players are as he looks ahead to the weekend.

Brett Seney was recalled to the Chicago Blackhawks, along with teammate Lukas Reichel, on Wednesday. (Photo by Donald Carlsson/FPH)

Rockford, Ill.-The Rockford IceHogs will be spending the weekend in Iowa hoping to build on a four-game win streak. The IceHogs will have to do so without two of their top playmakers. The news came down Wednesday that forwards Brett Seney (14 G, 24 A) and Lukas Reichel (14 G, 22 A) were recalled to the Chicago Blackhawks. Neither will skate for the Hogs in Des Moines.

At the time of the recall, Seney was the AHL’s active scoring leader with 38 points. Reichel, who was fifth in league scoring with 36 points, had just potted an overtime game-winner against the Texas Stars Tuesday night. Both players will be missed by Rockford, who is currently behind the Stars in second place in the Central Division.

IceHogs coach Anders Sorensen will have to make some adjustments. Players will have to step up against a Wild team that has won three of the previous four games between the teams this season. Rockford still has David Gust (18 G, 19 A), who was third in the AHL in scoring, on the roster. Gust has been skating with Seney and Reichel for most of the first three months of action. The responsibility of getting the puck to Gust falls to some capable skaters.

Luke Philp (13 G, 11 A) recently returned to the lineup after missing eight games with an injury. He will likely be tapped with centering Gust on the top line. Sorensen could also turn to rookie Cole Guttman (11 G, 10 A), who has come on strong in the last month of play.

On the veteran side, Dylan Sikura (8 G, 12 A) and Buddy Robinson (9 G, 8 A) are players who could pick up the scoring slack this weekend. Robinson had three goals in the final week of 2022. Prospects Michal Teply (5 G, 7 A) and Mike Hardman (1 G, 10 A) are also looking at a bigger role in the offense for the time being. For Hardman, who had 19 goals last season in 43 games with the Hogs, getting his first goal since October 29 would be the first step in getting his game back on track.

Defenseman Alex Vlasic (1 G, 5 A), who suffered a fractured fibula just three weeks ago, will be returning to action in Iowa this weekend, via Ben Pope of the Chicago Sun-Times.

Blackhawks prospect defenseman Alex Vlasic has recovered much faster than expected from his fractured fibula.

He was ruled out for 6 weeks on Dec. 16, but he expects to actually return this weekend for Rockford against Iowa, missing just 3 weeks.

This is a surprise, as his original prognosis was six weeks. His last game was December 13 in Rockford’s 7-4 win in Iowa.

Jaxson Stauber and Mitchell Weeks man the pipes for Rockford this week. Arvid Soderblom has been on the shelf since a groin strain on December 28. Dylan Wells has not played since leading the IceHogs to an overtime win in Texas December 21.

Stauber is coming off of a big overtime win against Central Division-leading Texas on Tuesday night. The rookie stopped 33 shots to keep Rockford in the game, which they won 4-3. Weeks was last in goal in the Hogs’ 6-2 win over Chicago on December 31.

That 7-4 win on December 13 in Des Moines was Rockford’s first of the season against Iowa, who won the first three meetings of the season series. The IceHogs open the weekend on Saturday in a 6:00 p.m. CDT start with the Wild. Sunday’s affair is set to begin at 3:00 p.m. CDT.