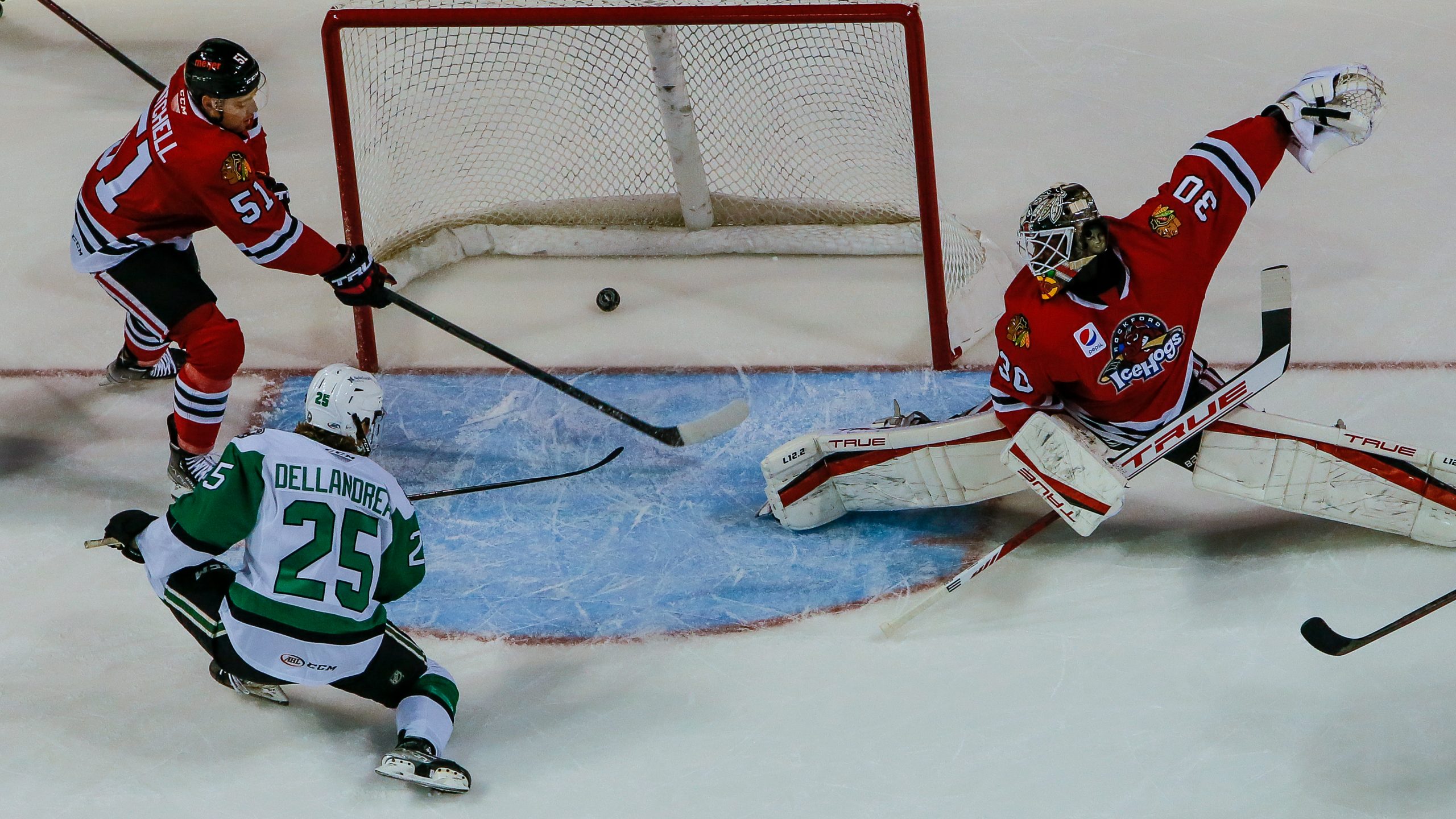 The Rockford IceHogs spent the entirety of October playing in opposing barns. Now it’s time for some home cooking.

The Chicago Blackhawks AHL affiliate finished a six-game road trip Saturday night. Rockford (2-4) posted a 4-3 win over the Texas Stars, earning a split of a two-game set in Cedar Park.

“I’m looking forward to getting home and just being home for a while,” Rockford coach Derek King admitted to Hogs broadcaster Joey Zakrzewski after the win. “Maybe get practicing on our own rink and have a couple days off here.”

Saturday’s win broke a three-game skid and avenged a 4-1 loss to Texas on Thursday. After having difficulty keeping pace with the Stars, King was happy to see his club rebound.

“The response is what we were looking for,” King said of the effort on Saturday night. “It wasn’t perfect, but they battled. It got ugly at times in our end, and chaos, but they’re still laying down in front of shots. They’re trying to do something, and that’s all we ask.”

The IceHogs bested Texas (3-3) despite being outshot 48-19 Saturday night. Rookie goalie Arvid Soderblom was named the game’s First Star, picking up his second win in three starts in 2021-22.

Wrapping up the road trip on a high note should build some momentum for the IceHogs as they open play at the newly refurbished BMO Harris Bank Center. King’s club begins a five-game homestand on Saturday night. The Hogs host Grand Rapids in the home opener, then welcome Manitoba into the BMO the following afternoon.

Rockford won’t leave the state of Illinois in November; seven of its nine games are at home. The other two dates are in Rosemont with the Chicago Wolves.

The IceHogs will spend the entire month battling Central Division foes, including their first look at the Moose since the 2019-20 campaign. Rockford will also re-establish its rivalry with the Milwaukee Admirals, who opted out of the 2020-21 season.

Working Out the Lines

King has been tinkering with his forward lines in Rockford’s first six games. He seems to have found some chemistry with his third line of Josiah Slavin, Carson Gicewicz, and D.J. Busdeker. The trio brought a lot of energy to the ice, with goals in both games.  Gicewicz picked up his first pro goal on Thursday, while Slavin’s tally proved to be the game-winner on Saturday night.

“They’re a stable line for us right now,” King said. “You put them out there, there’s no worries as a coach. They know what to do, they know their game, and I thought they did a great job.”

Busdeker, who signed an AHL contract with Rockford last season, had 12 points (5G, 7A) for the Hogs in 24 games in the shortened 2020-21 campaign. He has appeared in the team’s last three games, with a pair of assists in Texas.

Gicewicz and Slavin joined Rockford mid-season in 2020-21. Slavin, who signed an entry deal with the Blackhawks after his sophomore season at Colorado College, had seven points (3G, 4A) in 15 games for the IceHogs and has two goals and a helper for Rockford in six games this season.

Gicewicz (1G, 1A this season) was signed to an AHL deal with the IceHogs after leading UMass to last season’s NCAA Championship. He played ten games with Rockford, with two assists.

As was the case the previous weekend, D Chad Krys did not play in Texas. Krys was injured against the Wolves on October 16 and has not played since. Also sitting out the weekend was F Evan Barratt, who left an October 23 game in Iowa with an apparent injury.

AHL forward Kale Howarth (lower body) and Hawks defensive prospect Alec Regula (back) have yet to take the ice for Rockford this season.