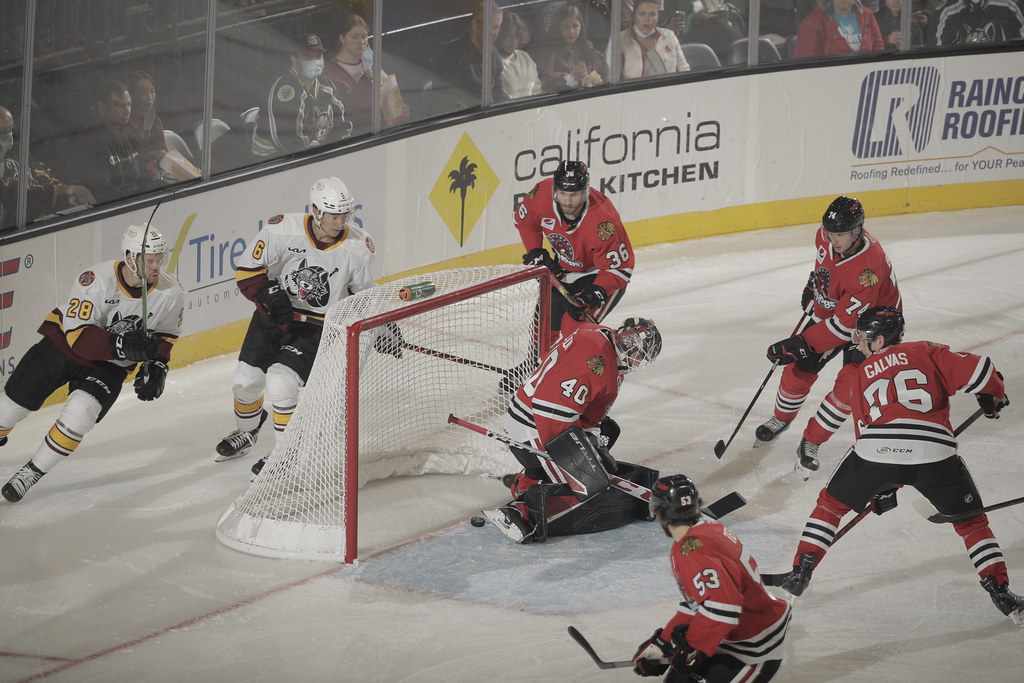 The Rockford IceHogs split two games to open the season, including a comeback win over Chicago. (Photo by Chicago Wolves)

ROCKFORD, Ill.-The Rockford IceHogs faced a stiff challenge in the opening weekend of the 2021-22 season. The Blackhawks’ AHL franchise had two tough road opponents to face in Grand Rapids and Chicago.

The IceHogs didn’t pick up their first win until their seventh game last season. Could Rockford gain win number one on this first road jaunt this season?

It didn’t happen right away; the Hogs dropped a 6-1 decision to the Griffins Friday night to open the season. However, Rockford rallied to defeat the Wolves 5-3 in Rosemont on Saturday.

Heading into the second period with Chicago, fans had a right to be concerned with how the offense was faring in the weekend’s action. The lone goal in Grand Rapids came off of a put-back by Josiah Slavin; the Griffins then reeled off five straight goals to spoil the season debut.

The offensive chemistry continued to be lacking at Allstate Arena. The Wolves outshot Rockford 16-3 in the opening twenty minutes, then took a 2-0 advantage early in the second. The Hogs seemed to be getting used to the lines set out by head coach Derek King.

Then came four unanswered goals in the second and third periods.

Rockford wasn’t moving the puck around the zone like the Wolves were for most of the evening on Saturday. However, they did make the most of some turnovers and counterpunched their way to a big win over their biggest division rival.

Defenseman Chad Krys, who played just six games a season ago, was in the lineup in both games this weekend. Unfortunately, he may be facing more time off the ice after a collision with Chicago’s David Cotton late in the first period Saturday night.

Krys was trying to intercept Cotton as he drove toward the Hogs net. The Wolves forward was knocked down on Stanton’s backcheck attempt. The sliding Cotton took Krys down with him. It appeared that Krys’s knee took the brunt of the accidental hit. He got up quickly but hopped off the ice to the Rockford locker room. Unfortunately, Krys was not putting any weight on his right leg and did not return to the game.

A second-round selection by the Hawks in the 2016 NHL Draft, Krys is in the final year of his entry-level contract. He played 45 games (two goals and six assists) in his rookie campaign before the season ended abruptly. Last season came and went without much action due to some injuries.

It looked as if Krys would get some early time in the lineup this season to showcase his game due to injuries to Caleb Jones and Wyatt Kalynuk. However, now he may be looking at missing some extended time himself.

This coming weekend, Rockford will be in Des Moines Friday and Saturday for two games with the Iowa Wild. Iowa defeated Texas 2-0 to open its season on October 16, then dropped a 3-1 decision to the Stars on October 17.