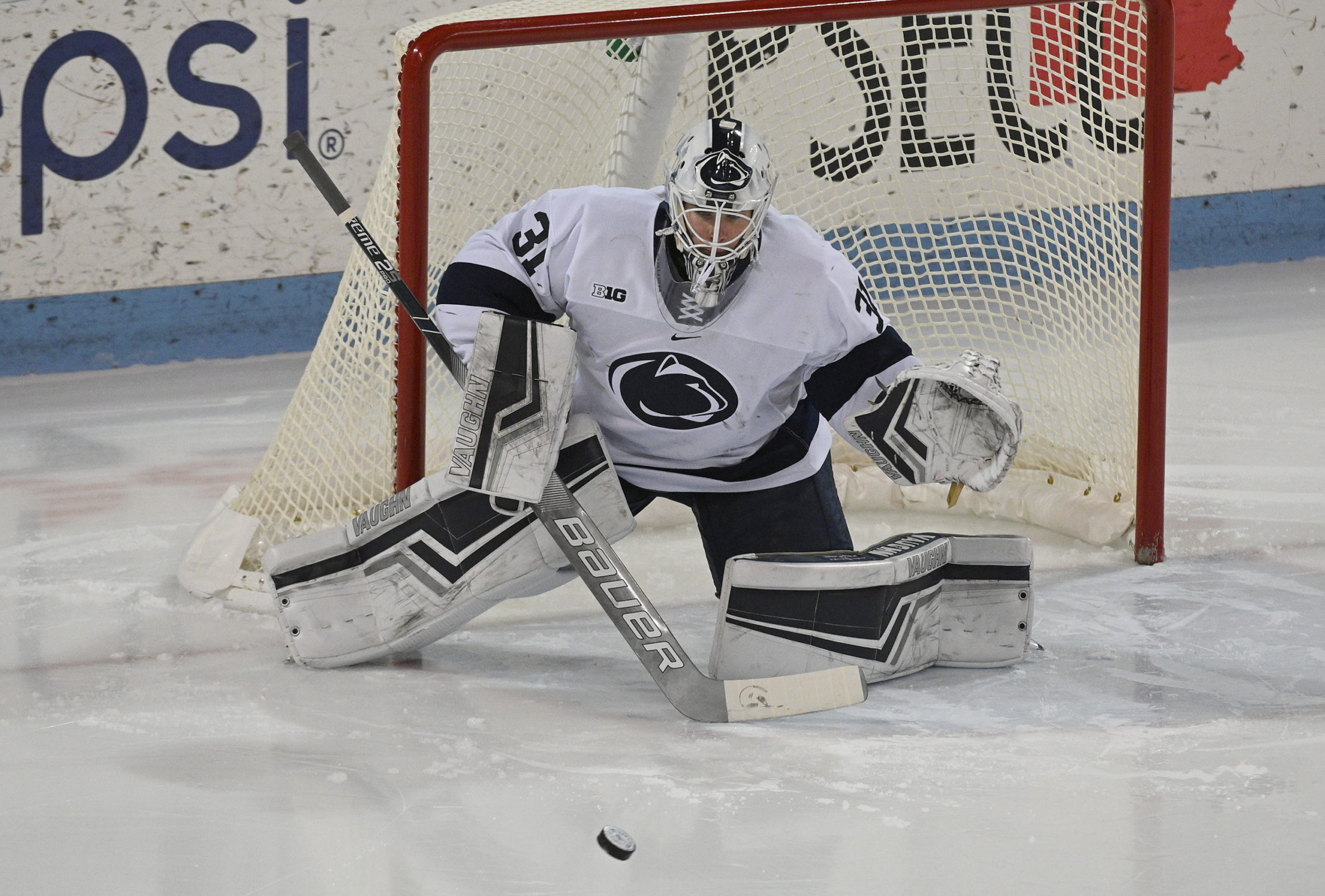 DENVER – When it came to goaltending in 2019-20, the Colorado Avalanche and their AHL affiliate Colorado Eagles rode the wave between injuries and pleasant netminding surprises.

On April 30, the Avalanche signed their third round 2018 NHL Draft pick Justus Annunen to a three-year entry level contract. Then, on May 4, the Eagles brought in Penn State University product Peyton Jones with a two-year AHL contract.

The addition of Jones, in particular, is an intriguing one. With an already stacked goaltending depth chart, the former Nittany Lions netminder could actually be called into action sooner than later. Two Avalanche-signed goaltenders — Hunter Miska and Antoine Bibeau — will hit restricted and unrestricted free agency, respectively, this offseason.

Penn State Men’s Hockey Coach Guy Gadowsky spoke with The Sin Bin and expounded on what the Eagles can expect from Jones if and when he gets the nod in Loveland.

“He’s incredibly athletic. I think you’re going to see that right off the hop. He’s a big kid — 6’4” — but he’s an athlete. His whole family are great athletes. His brother was a second round pick in Major League Baseball — a top prospect. (Peyton) is just very athletic.

“Every single day, he’s going to work extremely hard to make himself better. In fact, as a coaching staff, we were trying to encourage him to relax more rather than work harder. He’s one of those kids.

“Obviously, for a program, that’s a great thing to have. He really is a motivation for everybody on our team, to work extremely hard. He’s a great athlete who works his butt off.” 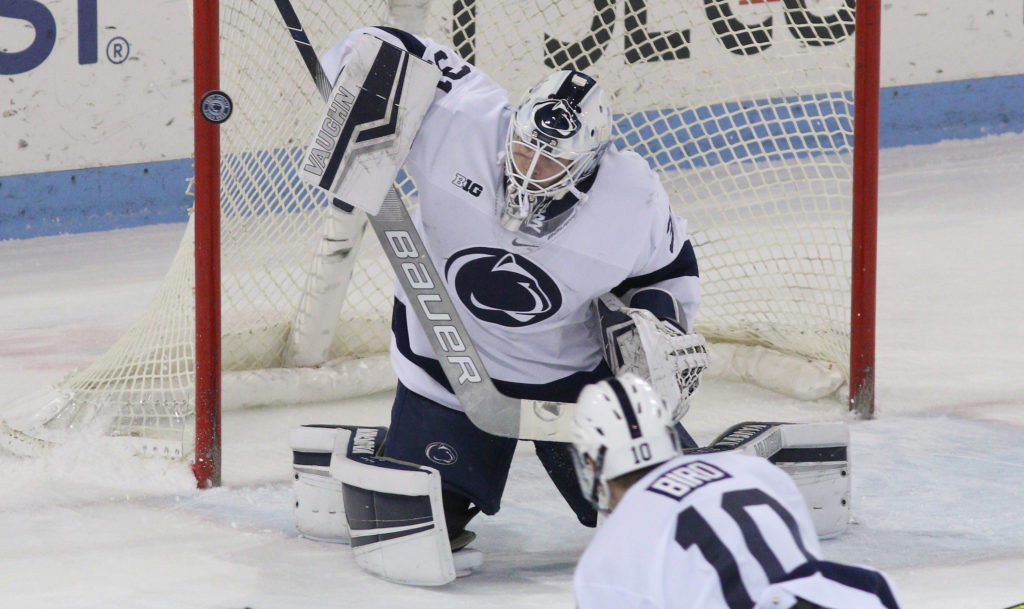 Coach Gadowsky says that Penn State wouldn’t have had nearly as much success in the Big Ten Conference had it not been for Jones backstopping for the Nittany Lions. And, the professional leagues took notice, doing their best to entice Peyton away from college. However, his priorities beyond the ice took precedent.

“We won the Big Ten conference his freshman year, and he was the MVP of the tournament. He was amazing, and he had several opportunities to go on. Both he and his family take academics very seriously, and he wanted to get his degree and come back. I think the biggest thing that he’s done for our program is how he raised the standard of doing everything you can to improve yourself as a student and an athlete.

“Like I said, he just works everyday to get better. He holds every goaltending record that our program has, but I think the way he did it and the standards that he left in terms of that commitment is what really made him such a unique and invaluable member of our program.”

Penn State Men’s Hockey had been a club program for over a hundred years before making the jump to the Big Ten in 2012. The team’s ascent from the AHCA to NCAA Division I turned out to be an unexpected one, and as Gadowsky says, Jones was an integral part of making that transition easier.

“When we jumped into the Big Ten, we were kind of forced into it a year earlier than we wanted to. We were supposed to have an opportunity to be an independent team for a couple years, but with the way things worked out, they pushed everything up. We had a new arena, and the Big Ten Network wanted hockey on it, so we jumped in. 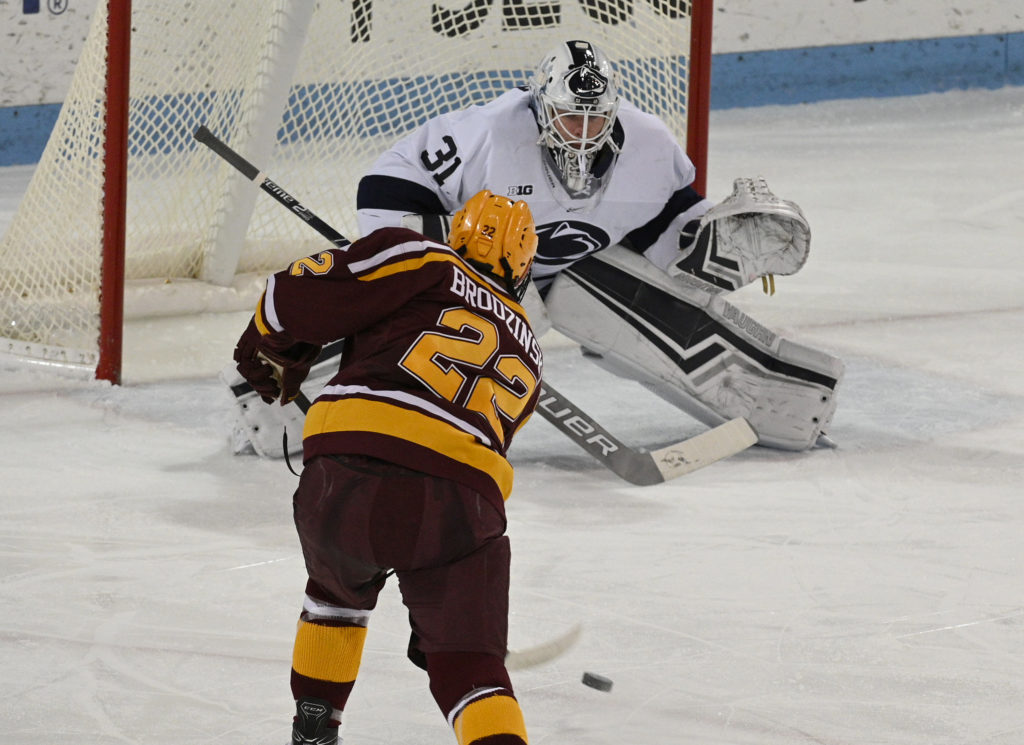 “For the first few years, everybody thought we were going to get absolutely killed…and along came Peyton. I mean, there’s a lot of other good players on this team, but Peyton was instrumental.

“Obviously, we would have never won that Big Ten Championship his freshman year if it wasn’t for him. Then this year, we won the Big Ten regular season championship, and that wouldn’t have happened without him, either.”

When asked which NHL goaltender Peyton is most similar to, Gadowsky gave an answer regarding his mental toughness and on-ice leadership.

“I remember in the past, top guys like Roberto Luongo were able to just remain extremely calm in some very frantic situations. And, I think when Peyton is at his best, he’s just so calm. He’s communicative, but he’s very calm doing it. He’s not a yeller and a screamer; he’ll communicate with his defensemen, but he’ll do it calmly.”

As Jones brings that calming presence to the Eagles come 2020-21, Coach Gadowsky had one final comment regarding his future in the American Hockey League.

“From both an athletic and work ethic standpoint, he will be a starter in the American League, for sure. It’s just a matter of when.”