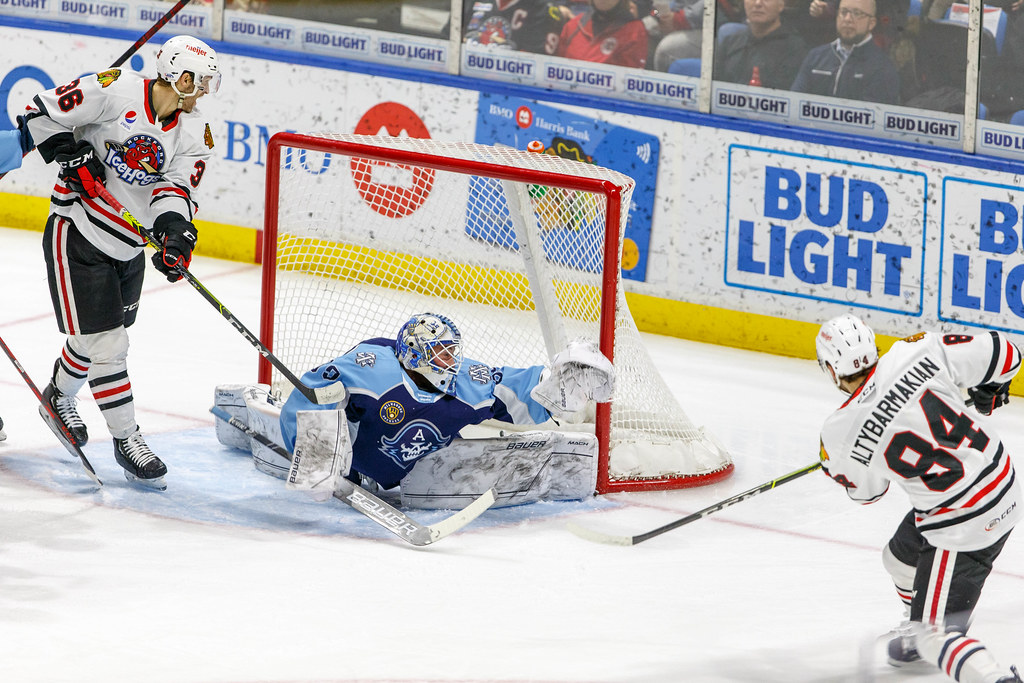 Connor Ingram robs Rockford's Andrei Altybarmakian on the way to his fifth shutout of the season. (Photo by Todd Reicher/Rockford IceHogs)

Rockford, Ill.– Connor Ingram continued his run as the hottest goalie in the AHL Wednesday night. The Milwaukee netminder posted his second consecutive shutout and third in his last four games, outdueling Rockford counterpart Arvid Soderblom in a 2-0 win over the IceHogs.

The Admirals picked up their seventh-straight win and also extended their point streak to nine games. Milwaukee (20-18-2-2) leapfrogged the IceHogs in the Central Division standings; Rockford (16-15-3-1) moving into fifth place.

Ingram and Soderblom continued a battle that began Friday in Milwaukee, where the Admirals bested Rockford in a 2-1 overtime victory. For nearly 55 minutes Wednesday, neither team could find its way into the opposing net.

Rockford had two prime opportunities turned away in the first period. Andrei Altybarmakian sent a one-timer from the right dot that Ingram nabbed to turn away the Hogs power-play unit midway through the first. Later in the period, D.J. Busdeker hauled in a pass at the right post and had an open net in front of him. The resulting shot glanced harmlessly off the right post.

The Admirals had their share of chances over the first two periods, with Soderblom knocking away several point-blank shots. Overall, the IceHogs rookie made 28 saves on the night. Unfortunately for Rockford, it wasn’t enough.

With time starting to run down in the third period, the Hogs defense attempted to send a clearing pass out of their zone. It never reached the blueline. Marc Del Gaizo held the puck in by tapping it to Joseph LaBate.

Mitch McLain worked his way behind Rockford defenseman Ian Mitchell and hauled in LaBate’s feed in the slot. He had enough time to skate across the crease and send a backhand shot past Soderblom for the eventual game-winner at 14:17 of the third.

Milwaukee added an empty-net goal from Matt Luff in the final minute. However, Ingram made McLain’s goal stand up, saving all 26 shots Rockford threw at him.

The IceHogs were blanked for the third time this season. Ingram, the reigning AHL Player Of The Week, handed Rockford its last shutout back on December 21.

Milwaukee will try to keep the winning going when they host Chicago this weekend. The IceHogs are also in action this weekend, with a home-and-home with the Iowa Wild set to begin Friday night in DesMoines.