Inside the Stats: Toledo Walleye – Game 1

The Sin Bin’s analytics writer, Mac Moore, shares some thoughts on Toledo’s 4-3 win over the Brampton Beast this past Saturday night

Inside the Stats: Toledo Walleye – Game 1

BRAMPTON, Ont. – The first game of the year is always a bizarre one filled with plenty of mistakes, first game jitters, and of course new faces. While everything from this game should be taken with a grain of salt, it is still interesting to see how forward lines and defensive pairings work together, as well as seeing which players may be poised for a breakout season. In this opener we were treated to a bit of everything and learned a few things as well from about every aspect of the game. Here are my biggest takeaways from the Walleye’s 4-3 win over Brampton.

1. Unlike many teams in their opener, the Walleye were not plagued by a slow start

21 seconds… That’s all it took for Toledo to score from the opening faceoff. Walleye captain T.J. Hensick put away a rebound that came off a shot from the point by defenseman Blake Hillman to give the Walleye an early lead. This would be followed up by another goal about five minutes later by Brendan Troock who took a shot from just outside the top of the circle that would squeak by Brampton goaltender Joey Daccord. A quick two-goal lead with minimal mistakes was just how the Walleye needed to start this season, and if future games go this way then their season will be very successful.

In short, score effects are how the score changes the style of play a team elects to use. For example, when you have a three-goal lead, like Toledo did, then you won’t play near as aggressively and as a result the other team will shoot the puck more often than your team. This was showcased in Toledo’s first game, as after Toledo took their three-goal lead, they played a far too conservative style that allowed Brampton to come back and eventually tie the game. In fact, after Toledo scored their third goal, they had only 22 more shot attempts the rest of the game while Brampton had 37. While it isn’t smart to play with a score-first mentality during all phases of the game, sitting on a lead too early will come back to haunt you.

3. Mark Auk showed he can provide offensive value for the Walleye

Back in August, I wrote an article about Mark Auk he signed with Toledo and I’ve been very excited to watch him play ever since. Saturday, we got our first glimpse of how he can be of use to the Walleye, and it was very pleasant to see for the most part. He led all Toledo defensemen in shots with three, and also showed that he isn’t afraid to skate the puck up the ice or handle it in the offensive zone. Late in the first period he had a nifty spin move that allowed him to generate a shot from the slot as seen here.

As forwards begin to develop chemistry with defensemen in the offensive zone, it’s plays like these that will lead to more dangerous opportunities for passing or shots, and I’d love to see Auk get more offensive zone faceoff starts in the coming games. His one rather large hiccup came in the third when a missed hit eventually led to Brampton scoring the game-tying goal.

I’m not a great evaluator of goaltending, but by any measure the 32-year-old Walleye netminder played a spectacular opening game, making 30 saves. These saves included stopping seven of Brampton’s eight odd-man rush opportunities and earning the win even after being out-shot in all situations. He played 41 games last year, and it’s my assumption that he will likely be on pace for that this season as well. If Nagle plays most of those games as he did against Brampton, then he will put Toledo in a very good position come playoff time.

Toledo lost the shot attempts battle in both even strength scenarios as well as over the course of the entire game, but they did have more slot shot attempts during even strength situations. Again, score effects did play a role in this, but in order to have a successful and sustainable season then Toledo will have to out shoot their opponents more times than not. 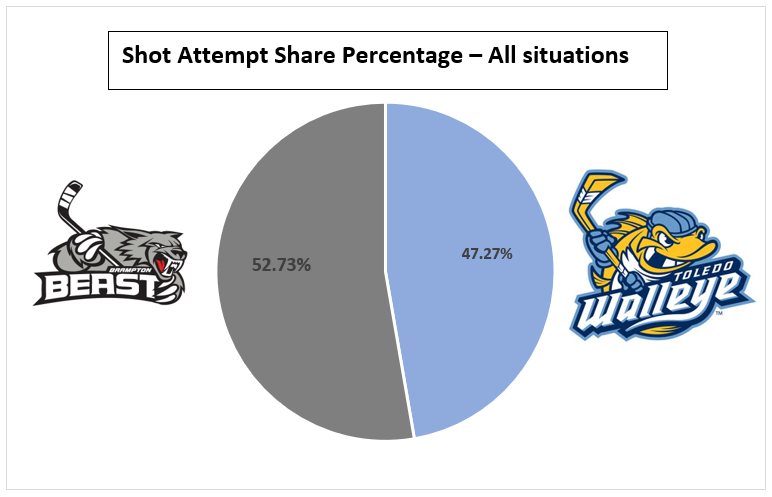 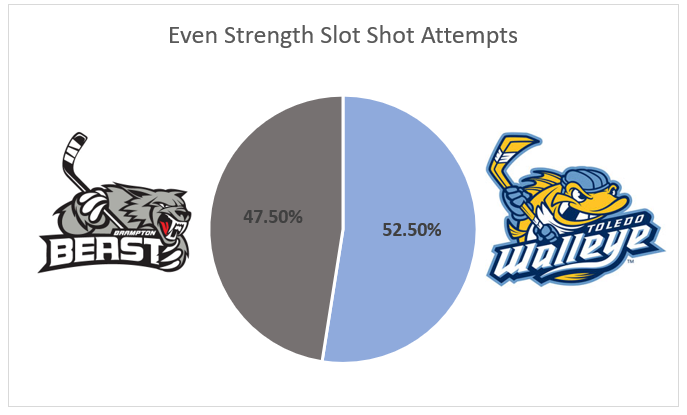 Also, here is a shot map that I unveiled on my Twitter (@Lawmacmoore) after the game.

Be sure to follow to see how the Walleye perform in their upcoming game against the Fort Wayne Komets on October 19th.
For more statistical analysis on teams across minor league hockey, follow Mac on Twitter!