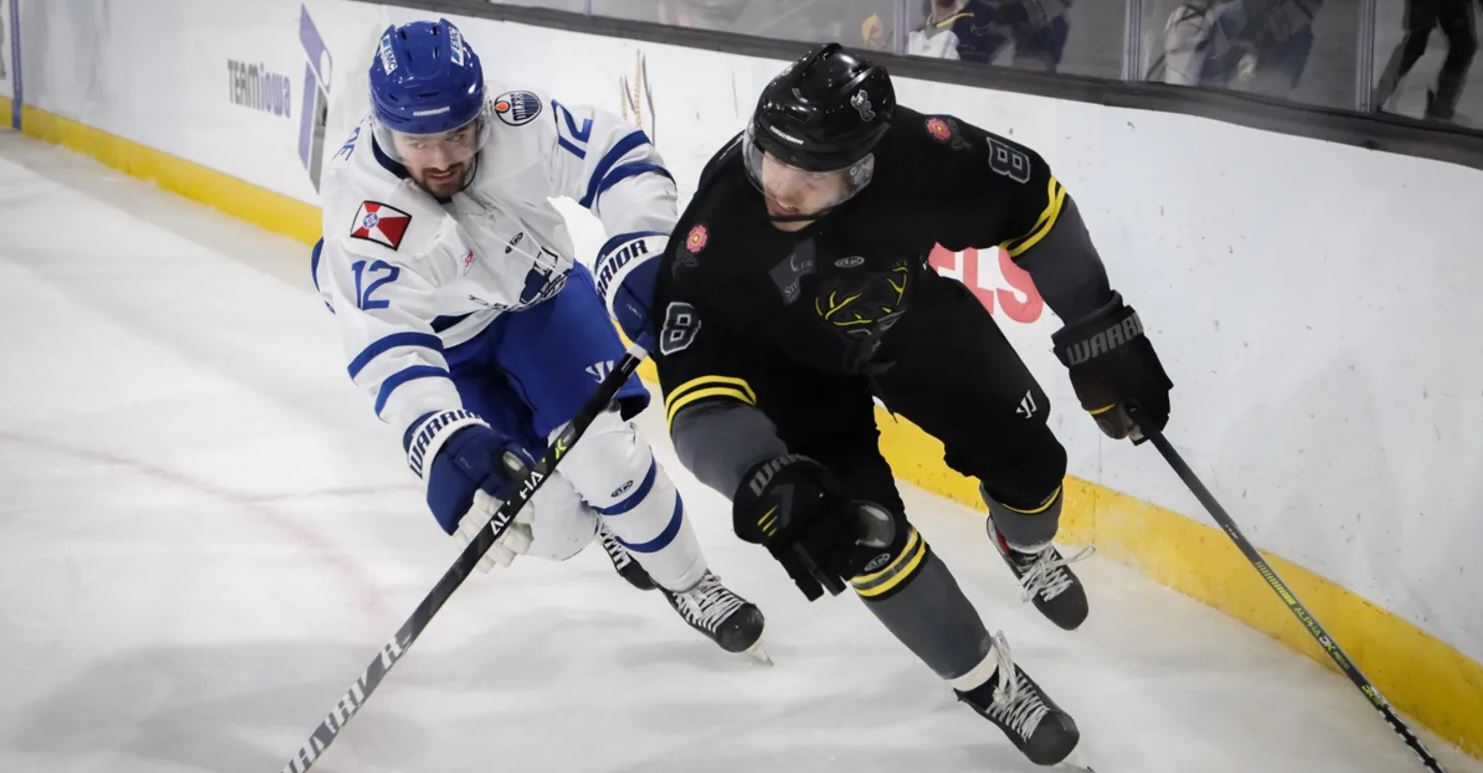 CORALVILLE, IA – The Wichita Thunder took on the Iowa Heartlanders for the first time in franchise history. Wichita looked like they would skate away with an easy victory after taking a two-goal advantage. However, Iowa battled back to tie the score, forcing overtime where the Thunder earned the shootout victory, 3-2.

Kris Bennett remains red-hot for the Heartlanders, scoring his team-leading 10th goal, extending his point streak to 10 straight games, and Peter Crinella scored his ninth of the season for Wichita. Evan Buitenhuis and Trevin Kozlowski played well in net.

Neither team could light the lamp in the first period, as both Buitenhuis and Kozlowski played well. The Iowa netminder saw the more rigorous action, stopping 13 shots while Buitenhuis made six. Kozlowski made a number of key saves, including with five minutes left in the period when Jay Dickman made a great pass from the boards across the slot to Dean Stewart at the back door. Somehow, the Heartlanders goaltender slid across and made an incredible pad save to deny the chance.

The teams came out of the first intermission, and the Thunder struck right away. Stewart blasted a shot from the point that Kozlowski saved, but Crinella battled his way through traffic to gain possession of the rebound and stuff it past the Iowa goaltender to give Wichita a 1-0 lead.

Almost exactly 13 minutes later, Wichita took a two-goal lead on an almost identical play to the previous tally. Stewart fired a blast from the left point that was blocked near the front of the goal. Logan Fredericks was able to gain possession of the deflection, directing the loose puck past Kozlowski for his second goal of the year.

The Thunder were in complete control, but Bennett got Iowa back into the contest with a power-play goal right at the 14-minute mark. The Heartlanders quickly set up inside the Wichita zone. Alex Khovanov had control of the puck just above the right face-off circle, making a perfect pass across the slot to Bennett at the back door. The Iowa captain gained control of the puck before firing a wrist shot that beat Buitenhuis to cut the deficit in half.

The Heartlanders put the pressure on in the third, outshooting Wichita, 11-7. That eventually enabled them to get the equalizer on Yuki Miura’s fourth goal of the season. Bryce Misley had the puck in the corner, firing a bad angle shot that Buitenhuis knot knocked down. However, Miura was right on the doorstep, slapping in the rebound to tie the score at two.

The Heartlanders nearly took the lead with about four minutes left in the contest. Billy Constantinou came out of the penalty box and took a feed out of the Iowa zone, moving in on Buitenhuis on a breakaway. However, the Wichita netminder made a great glove save to keep the score tied at two.

That sent the game to overtime, where Iowa dominated once again, outshooting the Thunder, 6-4. However, both Kozlowski and Buitenhuis were outstanding, continuing their domination in this contest.

With the score still tied, the game went to a shootout. Crinella capitalized on his attempt in Round 1, while Khovanov was stopped by Buitenhuis. Dickman then delivered, meaning that Bennett had to come through for Iowa to force another round, but Buitenhuis was having none of it, stopping the attempt to give the Thunder a 3-2 victory.

Buitenhuis set a franchise as well as an ECHL record for consecutive starts to begin a season, starting his 16th straight game. He made 35 saves. Kozlowski stopped 36 shots for Iowa. Bennett finished with a goal and an assist.

The Wichita Thunder (10-5-1) are off until Sunday when they travel to Tulsa to take on the Oilers. That contest is scheduled for 4:05. Meanwhile, the Iowa Heartlanders (4-10-3) will travel to Fort Wayne to take on the Komets for a pair of games starting on Friday night. The puck drops at 7:00.