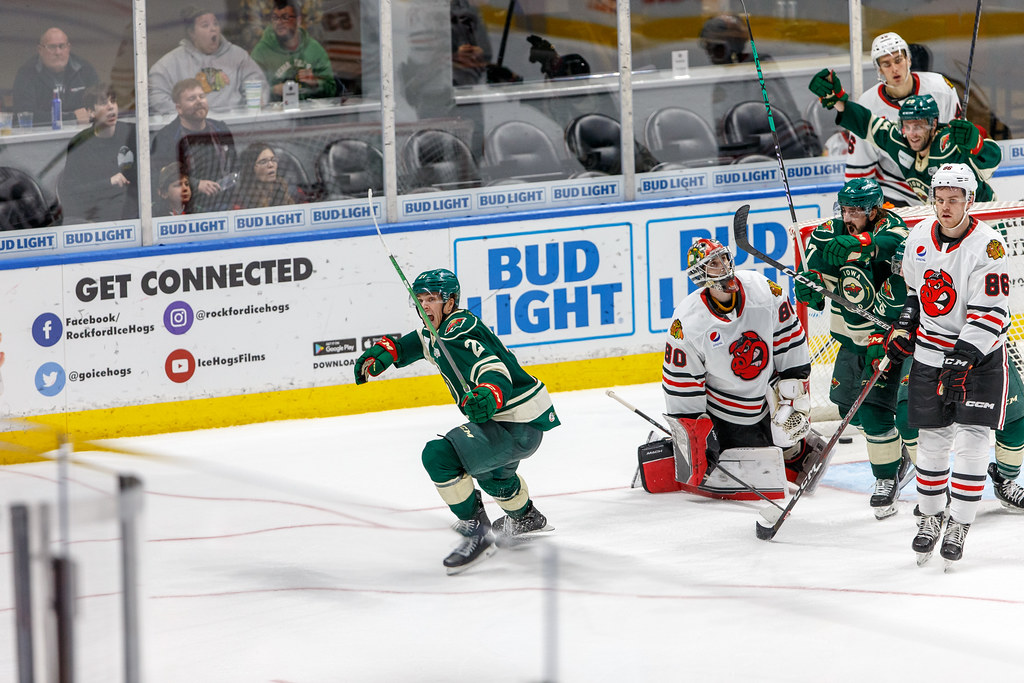 With two minutes to play Sunday, the Rockford IceHogs had a two-goal lead on the Iowa Wild. It looked as if the IceHogs would end a seven-game homestand on a winning note

ROCKFORD, Ill. – With two minutes to play Sunday, the Rockford IceHogs had a two-goal lead on the Iowa Wild. It looked as if the IceHogs would end a seven-game homestand on a winning note.

That’s why they play the last two minutes, however.

Iowa staged a late rally, with Mitchell Chaffee scoring twice to send the game into overtime. The Wild would eventually prevail 5-4 in a shootout at the BMO Center.

The loss spoiled an impressive afternoon for the Rockford power play, which had three goals to put the Hogs in a position to win. Mitchell Weeks, making his third-straight start for Rockford in goal, stopped 47 Iowa shots but could not prevent the Wild from winning the shootout.

The two teams traded power-play goals in the opening period. Joe Hicketts pinballed a shot off both goalposts to give Iowa a 1-0 lead 5:52 into the game. Rockford tied the game with Luke Philp‘s fifth goal of the season at the 10:56 mark.

The score stayed knotted until the waning minutes of the second period, when Rockford’s Brett Seney jumped on a rebound of a Louis Crevier shot at the left post. Before Wild goalie Zane McIntyre could slide across the crease, Seney sent the puck to the twine, giving the IceHogs a 2-1 advantage at 17:15 of the second period.

Iowa initially thought that they had tied the game on a Steven Fogarty tally late in the frame. The call on the ice was no goal; a call that was upheld after the period ended when the officials took a look at the replay.

However, when the teams came out to start the third, the call was re-evaluated and Fogarty was credited for his sixth goal of the season. What changed? The tablet being used for the replay froze up, forcing the officials to take another look on a working device. The final 44 seconds of the second period were replayed, this time with the game even at two goals.

The IceHogs took control of the contest in the final frame on the power play, with Michal Teply restoring the Rockford lead with a one-timer on the man advantage at 4:34 of the third. Philp got his second of the afternoon with a snipe from the right dot at the 11:04 mark.

With Philp in the box for hooking with 1:56 left, the Wild brought McIntyre to the bench. Immediately, Iowa drew cord with a Chaffee goal at 18:09 of the third. Rockford tried staving off another six-man push by the Wild in the closing seconds, only to see Chaffee sneak into the crease to knock in a loose puck past Weeks with six seconds remaining in regulation.

With no movement in the 3-on-3 session, the extra point was decided in the shootout. McIntyre denied Teply and Seney, while Iowa got shootout tallies from Sammy Walker and Nic Petan to end the game.

McIntyre made 36 saves to pick up the win. Iowa (3-3-1-2) moves into a tie with the 4-4-0-1 IceHogs for fifth place in the Central Division. The Wild are next in action on Friday, when they travel to Milwaukee. Rockford has the week to regroup before heading to Texas for the first of two games with the Stars on Saturday.

You can follow Jon Fromi on Twitter @FPHIceHogs! For the latest news on the American Hockey League, be sure to follow our AHL team and listen to The Holy GrAHL Podcast each week!