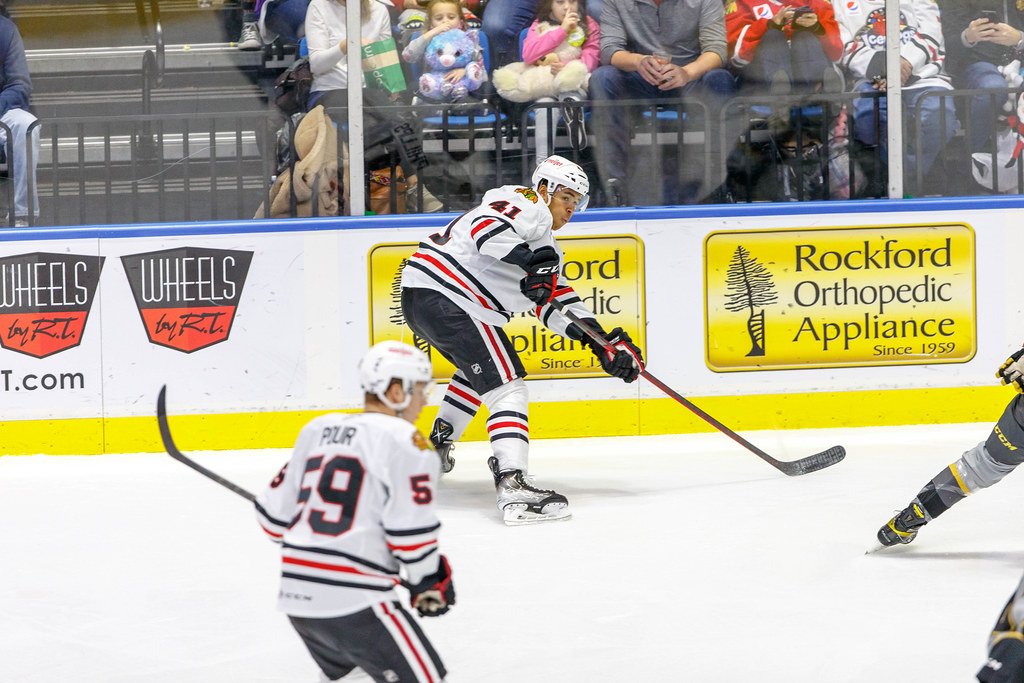 Rockford, Ill.– Rockford IceHogs defenseman Issak Phillips is a prospect on the rise in the Chicago Blackhawks organization. After missing a couple of weeks, Phillips has resumed the impressive work in Rockford that earned him his first NHL call-up.

Phillips, 20, made his debut with the Blackhawks on October 29. He wound up in COVID-19 protocol after playing three games with the Blackhawks. Since getting back into the IceHogs lineup on November 20, it has been back to the goal at hand.

“I’m not going to be a loud voice in the room necessarily right now in my career,” Phillips mentioned last week during Rockford’s weekly media session, “but I think I can be a guy that can lead by example on the ice just by my work ethic.”

Chicago’s fifth-round pick in the 2020 NHL Draft, Phillips was able to get his pro career started when his junior league, the OHL, delayed the start to its 2020-21 season. Despite being 19 and having only two seasons with the Sudbury Wolves, Phillips signed an amateur try-out agreement with the IceHogs.

Quickly finding a regular spot in the lineup, Phillips impressed the organization enough to earn a three-year entry-level contract. The 6’3″, 192-pound blueliner played in 27 games for Rockford and finished the abbreviated 2020-21 campaign with two goals and seven assists.

Phillips is growing into a big part of the IceHogs defensive corps this season. In 17 appearances, he has already eclipsed his offensive numbers from a season ago. An assist on Alexander Nylander‘s game-winner in a 3-1 win in Texas Friday night gives Phillips eight helpers to go with a pair of goals.

“I certainly don’t feel like a veteran out there, but I’m definitely confident in my abilities,” he said. “I’m confident going into battles. Every time I step on the ice, I think I can play against team’s top lines.”

Phillips has shown proficiency with his shot this season. However, at the other end of the ice, he is trying to raise his game.

“I think I’ve kind of improved in my defensive game,” he said. “I’ve been working really hard on my stick and almost being more under control in the d-zone. You don’t have to be sprinting out or jumping in the corner every second. You can just hold the net, be a little more composed. It’s something as a d-corps we’ve all been working on and I think that’s kind of where I’ve been improving. Just being a little more composed helps. It almost makes the forward just kind of hold back being more predicable on the ice.”

Developing prospects like Phillips, Ian Mitchell, Wyatt Kalynuk, Jakub Galvas, Alec Regula, and Nicolas Beaudin figure heavily into the success Rockford has enjoyed over in December. In part, the Hogs 5-3 mark this month is due to the defense chipping in on the scoreboard.

“I think it really just comes down to doing things right on the defensive side of the puck,” Phillips continued. “Then it’s not changing your game, it’s just getting pucks to the net and doing all the right things and things will happen for you on the offensive side as well.”

Phillips has had a taste of life in the NHL with the Blackhawks. As he picks up experience in Rockford, the young defenseman seems to be pushing for a more permanent role in the future.