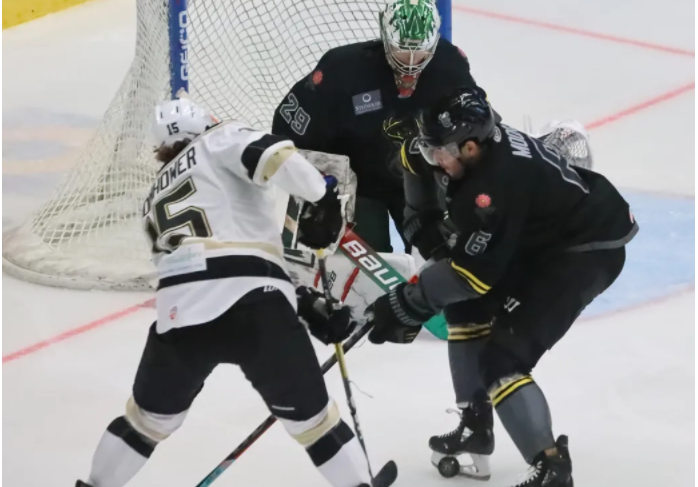 WHEELING, WV – Hunter Jones successfully returned to the Iowa Heartlanders on Saturday, stopping 33 shots to help lead the team to a 4-1 victory over the Wheeling Nailers. Jones had not started for the Heartlanders since being called up by the Iowa Wild of the AHL in early December, but he was outstanding in his return, shutting out Wheeling for 45 minutes. Jack Billings provided all the offense Jones needed, scoring two goals, and Kris Bennett added a goal and an assist.

Iowa took control of this game right away as Billings scored 1:17 into the contest. Joe Widmar began the play, carrying the puck through the neutral zone along the boards and into the Wheeling end. There, he found Billings moving down the slot, passing the puck to his linemate who gained control before lifting a backhand through the legs of Nailers netminder Stefanos Lekkas’ legs for his 13th goal of the year.

The one-goal lead held for the first intermission as Iowa outshot Wheeling, 13-6. In the second, the Nailers began to control play, outshooting the Heartlanders, 12-8. However, Jones was sharp, making a number of key saves to help keep his team on top.

Despite being outshot, Iowa came away with three goals in the second frame to take a commanding lead. All came early in the period, starting at 2:32 when Zach White scored his sixth goal of the year. Ryan Kuffner led a rush into the Nailers zone, dishing the puck to White who roofed a wrist shot over Lekkas’ shoulder to make it 2-0.

Just before the four-minute mark, Bennett scored his 16th goal of the year to extend the lead to three. With Wheeling on the power-play, Bennett stole the puck at his own blueline, heading the other direction on a breakaway. He moved to his forehand, getting Lekkas to shift before going back to the backhand to tuck the puck inside the far post.

Three minutes later Billings added his second goal of the contest. Cole Stallard passed the puck to Billings at the right face-off circle, who blasted a one-timer by the Nailers netminder to make it 4-0.

It was all Jones from there. Wheeling would finally beat the Heartlanders netminder at 5:33 of the third period when Tyler Drevitch scored his fifth goal of the year, however, that would be all the offense that the Nailers could muster. Jones earned his third victory while lowering his goals-against average to 4.09.

The Iowa Heartlanders move to 17-21-6, jumping ahead of the Indy Fuel and into sixth place in the Central Division. The Heartlanders will welcome the Utah Grizzlies (26-15-3) on Wednesday. The puck drops at 7 p.m.