DES MOINES, Iowa – A night after being blanked at home by the Iowa Wild, the Chicago Wolves evened the score, downing the Wild 4-3 in Iowa.

DES MOINES, Iowa – A night after being blanked at home by the Iowa Wild, the Chicago Wolves evened the score, downing the Wild 4-3 in Iowa. Ben Jones provided the game winner with the first goal of his professional career. The win pulled Chicago within four points of the Wild in the Central Division standings.
The Chicago Wolves got on the scoreboard first, scoring a shorthanded goal 5:08 into the contest. Patrick Brown made a great pass to Curtis McKenzie, who put the puck in for his fifth goal of the year.
The one goal lead held into the second, but the Wild would take the lead with two goals less than two minutes apart. That first came at 8:53. Louie Belpedio made a great pass J.T. Brown in the slot. Brown’s shot was saved, but the rebound came right to Gerald Mayhew, who buried it in the upper corner for his ninth goal of the year. 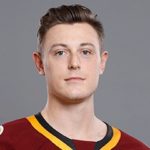 Almost exactly 90 seconds later, it was Kyle Rau putting his team on top. After Connor Dewar’s shot was saved, Rau swept in, recovered the rebound, then swept across the net to put a backhand over Oscar Dansk for his fifth goal of the year.
The Wild were flying high, but Chicago dominated play over the final half of the second period, tying the score a little less than four minutes after Rau’s tally.
The Wild were having trouble clearing the puck out of their end, which ended up giving the Wolves a great opportunity. Reid Duke knocked the puck off the Iowa defender’s stick right to Lucas Elvenes. Elvenes moved in on Wild goaltender Mat Robson before making a great pass back to Duke, who buried the puck in the back of the net to tie the score at two.
With a little less than three minutes left in the second, Chicago got back on top. Gage Quinney took the puck from his own end, heading down the center of the ice and into the Wild zone. He looked to move through two Iowa defenseman, passing the puck to Elvenes as he was being knocked down. Elvenes made a nice move to slide the puck around Robson for his sixth goal of the year, putting Chicago up 3-2. 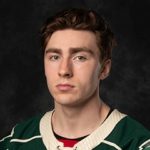 The Chicago Wolves had a one goal lead heading to the second break. But, as with the second, Iowa tied the score again in the third. At 8:16, Keaton Thompson fired a shot from the point that was knocked down right to Connor Dewar, who lifted the puck into the corner of the net for his first professional goal.
The score was tied for the fourth time, but not for long. Almost exactly 90 seconds later, Chicago retook the lead for good. The Wolves were able to keep the puck in the Iowa end thanks to a relentless forecheck that gave them a couple of great shots from the point that Robson knocked away. Eventually, Jones gained control, beating the Wild goalie with a rising shot for his first professional goal to put Chicago on top, 4-3.
The Wild pulled Robson with a little less than two minutes left in the game, and had three great scoring opportunities, but Dansk knocked aside each chance. Iowa had one last opportunity to tie the score with the faceoff in the Chicago end with 12 seconds left in the game, but they would lose the draw and the Wolves would run out the clock.
McKenzie and Elvenes each finished with a goal and an assist for the Wolves. Dansk was solid in net, stopping 31 of 34 shots he faced. The Wild were led by Dewar, who had a goal and an assist. Robson stopped 19 of 23 shots.
The Iowa Wild (8-9-1) return to action on Tuesday when they welcome the Milwaukee Admirals. Milwaukee has won seven straight games. Their last loss was to the Iowa Wild when Kaapo Kahkonen shut them out, 1-0.
Follow Robert on Twitter for everything Iowa Wild during the 2019-20 season!