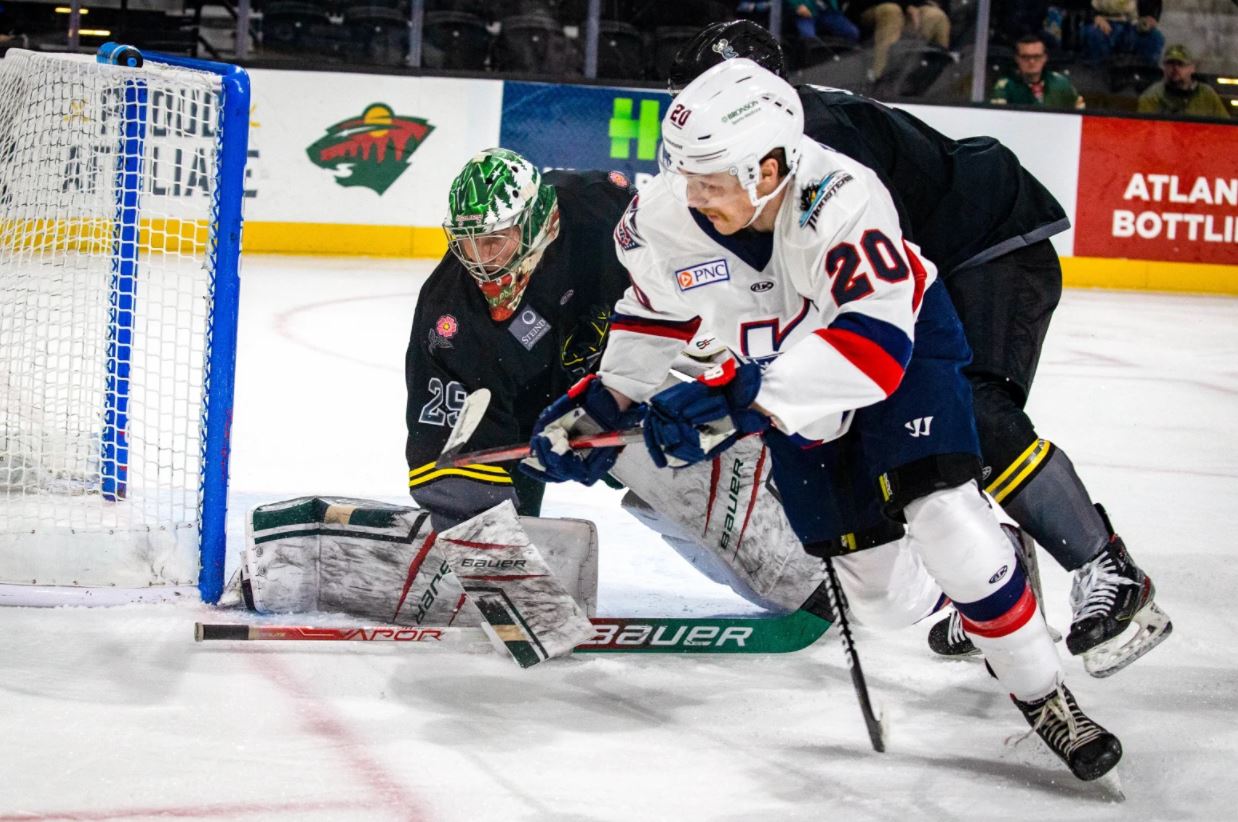 Three goals by Zach Jordan proved to be the deciding factor as the Wings defeated the Heartlanders, 5-2. Ryan Kuffner had his first two-goal game in an Iowa uniform. The victory snapped a four-game losing skid for the Wings.

Kalamazoo took control of this game right away, netting three first-period goals to head to the first intermission up, 3-0. Tanner Sorenson sped in toward the right face-off circle on a 2-on-1 break, then found Jordan at the backdoor for the one-timer to put the Wings on top at the 5:55 mark, his ninth goal on the year.

Just 29 seconds later, Kalamazoo was back on the board. Greg Betzold made a perfect pass onto the stick of Kyle Blaney, who split between two Iowa defensemen as he moved down the slot. Blaney then fired a wrist shot that beat Heartlanders netminder Trevin Kozlowski through the legs for his sixth goal of the year.

The Heartlanders looked a little shellshocked but began to pressure in the second period, outshooting the Wings, 16-8. That helped them to get on the board at the 3:20 mark when Kuffner scored his first goal of the game. With Iowa on the power-play, Jake Smith was trying to wrap the puck around the boards when it took a good carom for the Heartlanders out in front to Kuffner, who easily tucked the puck into the net for his second goal of the year. Smith earned an assist on the play, extending his point streak to 10 straight games.

Despite dominating Kalamazoo, Iowa came away with just one goal in the frame. The Wings extended their lead back to three when Logan Lambdin scored 2:40 into the final frame. Andrew DeBrincat moved the puck back to Lambdin at the point, who blasted a slap shot past Kozlowski for his team-leading 15th goal of the year.

Kuffner responded 11 minutes later, cutting the Iowa deficit back to two. Joe Widmar carried the puck along the right boards heading toward the goal line, then made a pinpoint pass in front to Kuffner, who redirected the puck by Trevor Gorsuch to make it a 4-2 game.

With about three minutes left in the contest, Iowa pulled Kozlowski for the extra attacker. However, Gorsuch continued to shine, keeping Iowa out of the net. Jordan added an empty-net tally with 31 seconds left to seal the victory.

Gorsuch finished with 37 saves to earn his eighth victory of the year. Kozlowski stopped 19 of 23 shots. Sorenson finished with two assists.

These teams will battle again on Saturday evening. The puck drops at 7:00.