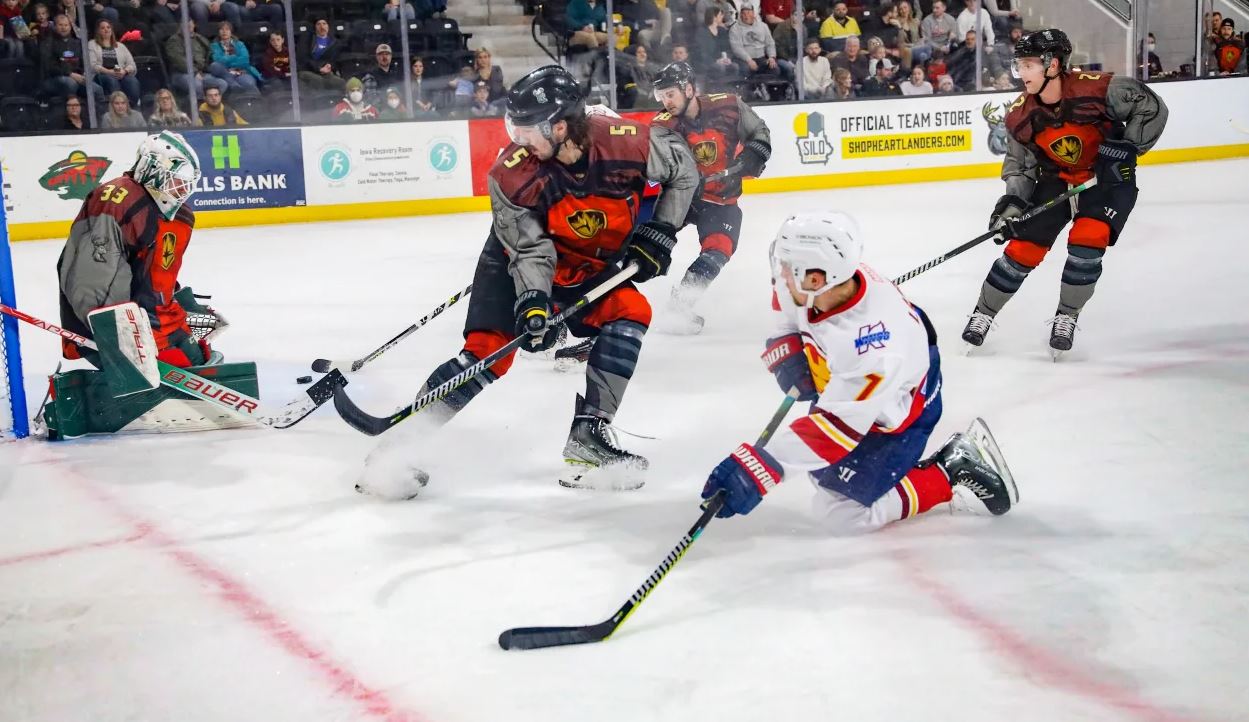 CORALVILLE, Iowa – Zach Jordan is proving to be quite the nemesis to the Iowa Heartlanders, scoring the game-winner on Saturday to lead the Wings to a 3-2 victory. This comes a night after Jordan scored a hat trick to lead Kalamazoo.

Logan Lambdin recorded a pair of assists, and Trevor Gorsuch stopped 34 shots to earn the victory. In the loss, Trevin Kozlowski made 27 saves, and Ryan Kuffner scored his third goal in his last two games.

Each team scored a goal in the first period, sending this contest to the first intermission tied at one. Kalamazoo got the scoring going just after the 17-minute mark when Greg Betzold recorded his sixth goal of the season. Lambdin took a shot that Kozlowski saved, but the rebound deflected into the air, where Betzold batted it in to put the Wings on top by a goal.

A little over a minute later, the Heartlanders tied the score. Kris Bennett quickly moved through the neutral zone and into the Kalamazoo end. As he approached the left face-off circle, he found Kuffner breaking for the back door, making a perfect pass that his linemate deflected past Gorsuch. That was the fourth goal of the season for Kuffner.

Neither team looked like they would capitalize in the second, even though Kalamazoo outshot Iowa, 15-9. The Wings were totally dominating the frame, but Kozlowski was spectacular. However, with a little under 30 seconds left in the frame, the Wings scored two goals to jump out to what became an insurmountable lead.

The first came with 23 seconds left when Iowa was trying to clear the puck out of their own zone. However, Justin Murray moved up from the point to knock the puck down, then passed it to Justin Taylor, who quickly moved it across the slot to Matheson Iacopelli. Iacopelli lifted a wrist shot that beat Kozlowski to put the Wings on top. 2-1.

Just 10 seconds later, Kalamazoo extended their lead to two. Tanner Sorenson won the draw at center ice back to Lambdin, who found Jordan speeding toward the Iowa end. He made a great pass through the neutral zone right onto the tape, springing Jordan on a breakaway where he beat Kozlowski for his 12th goal of the year and fourth in two nights. Jordan has goals in three straight games and at least one point in his last five contests.

The Heartlanders took command in the third period, outshooting Kalamazoo, 17-5. This time, Gorsuch had the opportunity to shine, knocking aside 16 of those attempts.

The only goal that came for Iowa was when Billy Constantinou scored a power-play goal a little over four minutes into the period. Kaid Oliver moved the puck back to the point, where Constantinou slid across the blueline before blasting a slapshot that beat the Wings goaltender to the blocker side.

Iowa was back within a goal but could not find the equalizer. They pulled Kozlowski with 80 seconds left in the contest and had three great scoring chances in the final 20 seconds but could not get one past the Kalamazoo netminder.