Knoxville Takes Game One Against Roanoke in SPHL Quarterfinal Matchup 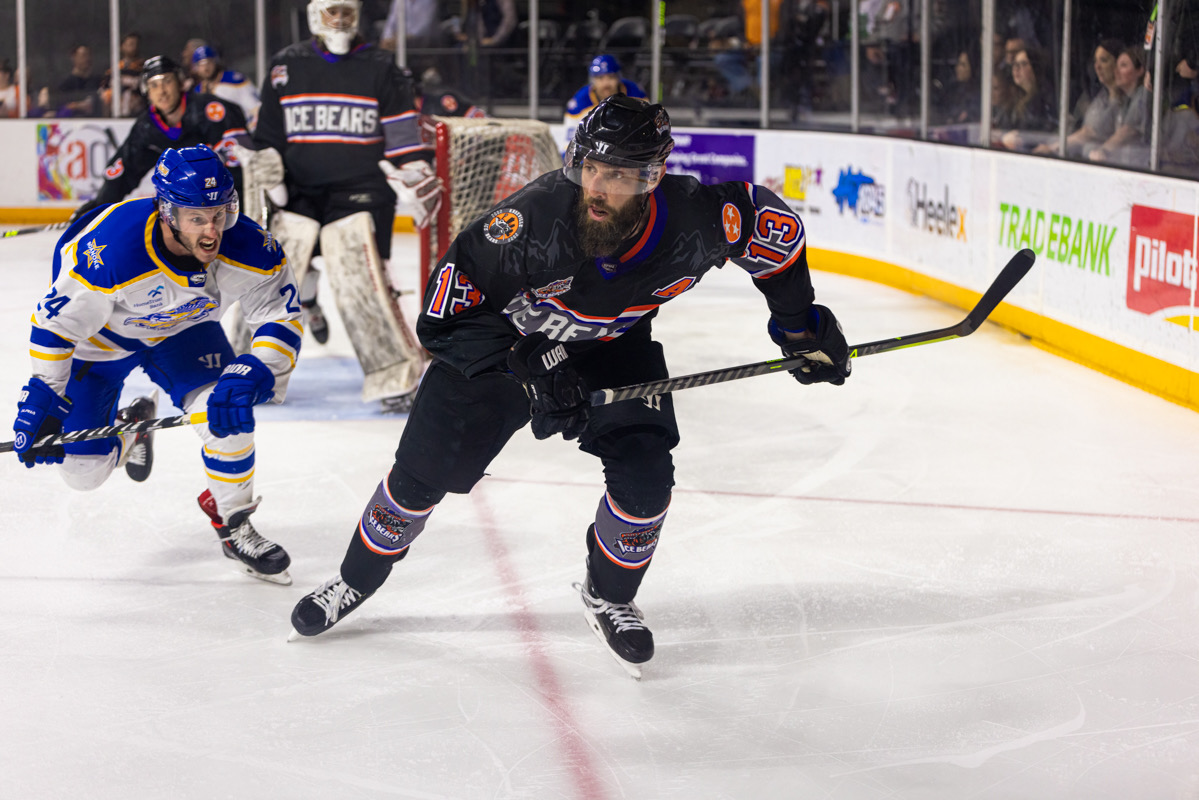 KNOXVILLE, Tenn– The first game in the Presidents Cup Playoff quarterfinal matchup between the top-seeded Knoxville Ice Bears and number eight Roanoke Rail Yard Dawgs did not disappoint. Ahead of the game, Knoxville head coach Jeff Carr called Roanoke a dirty team during an interview with the local news. Meanwhile, Roanoke’s Brant Sherwood’s stitches were out, and he said he would get his pound of flesh every chance he got. The game was full of intensity, but the scoreboard was leaning towards the home team’s side at the night’s end as the Ice Bears took down Roanoke 4-1.

The first period got off to a quick start. Thirty-five seconds in, Roanoke found themselves on the breakaway when a Nick DeVito jumped a Knoxville pass at the blueline. DeVito dished the puck up to Travis Broughman, who then skated in all alone on Jimmy Poreda. Poreda made the pad save. At that point, Roanoke got caught in a line change, and the whistle was blown for too many men on the ice. All the momentum was in the Rail Yard Dawgs’ direction, and now they found themselves in a penalty kill situation. The Rail Yard Dawgs penalty kill unit was able to answer the bell, and the game remained scoreless.

At the 13:39 mark in the period, we would see our first goal. The goal came when Knoxville’s Anthony McVeigh took a shot from the right-wing boards. Stepan Timofeyev collected the rebound and somehow managed to find a hole between Sammy Bernard and the goal post as he pounded the puck home.

The last five minutes of the period were all about Roanoke. They controlled the play and spent the majority of the time in the Knoxville defensive zone. However, Poreda stood his ground, and the score remained 1-0, heading into the first intermission.

Penalties seemed to be how these two teams were going to start periods in this game. Just 14 seconds in, Andrew Bellant was called for tripping, and the Rail Yard Dawgs went on their first power play of the night. Roanoke saw some big chances and drew a second penalty that allowed for a three-second 5-on-3 powerplay when Timofeyev went to the box for high sticking. The Ice Bear penalty kill unit and some solid saves by Poreda were the difference, and the Ice Bears held onto the one-goal lead.

At the 5:38 mark in the period, the Rail Yard Dawgs got into some more penalty trouble with Gehrett Sargis headed to the box for tripping. Though, during the Knoxville powerplay, the Roanoke penalty kill was up to the challenge and didn’t allow a single shot on goal.

With 7:14 remaining in the period, the Ice Bears still had not recorded a single shot on goal in the second period. That would change when Roanoke was called for their fourth penalty of the night. This one came when Bryce Martin was called for interference on a would-be Knoxville breakaway. Knoxville got three quick shots off to finally register a shot on goal, but the Roanoke penalty kill once again kept the Ice Bear powerplay off the scoresheet. 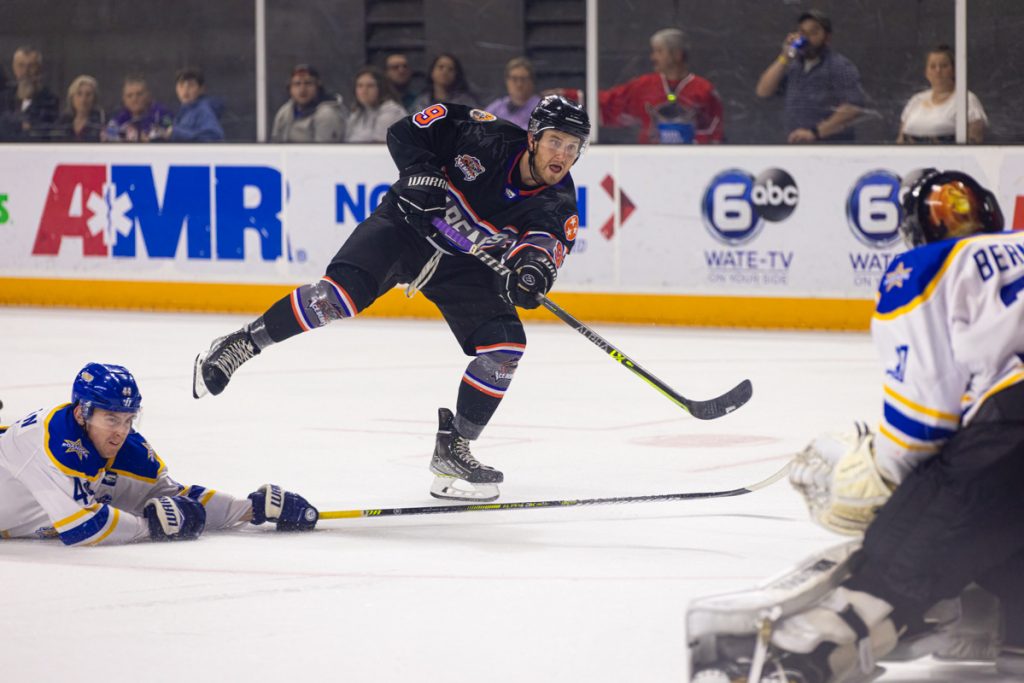 With just 2:47 remaining and only five shots on goal, the Ice Bears showed their perseverance when Bellant scored the second Knoxville goal of the night. The goal came when Dean Balsamo collected the loose puck in front of the crease. Bernard committed to a Balsamo shot. Balsamo instead passed the puck over to Andrew Bellant, and Bellant put the puck in the back of a wide-open net.

Roanoke was almost able to cut the deficit into one in the period’s final seconds. Unfortunately for the Rail Yard Dawgs, the horn sounded just before they could get set up. The Ice Bears took a two-goal lead into the final period despite being outshot and outplayed for much of the period.

The third period started a lot slower than the first two. The two teams exchanged a few chances, and then, just under seven minutes into it, things started to get interesting. Roanoke’s Sean Leonard was called for interference, and he was not all too pleased with the call. He continued to argue the call, which in turn created another penalty. He was given 14 total penalty minutes when it was all over, including a game misconduct.

Knoxville started their four-minute powerplay with a full head of steam and looked to seal the deal. Balsamo was the guy to answer the call when he skated into the offensive zone. He sped past the Roanoke defense and beat Bernard five-hole, making it a three-goal lead for the Ice Bears.

With a minute and thirty seconds remaining on the double minor, the other Leonard in the game, Steven Leonard of Knoxville, was called for a high stick, and the two teams skated 4-on-4. Nothing else would come of the powerplays, and the teams went back to full strength. 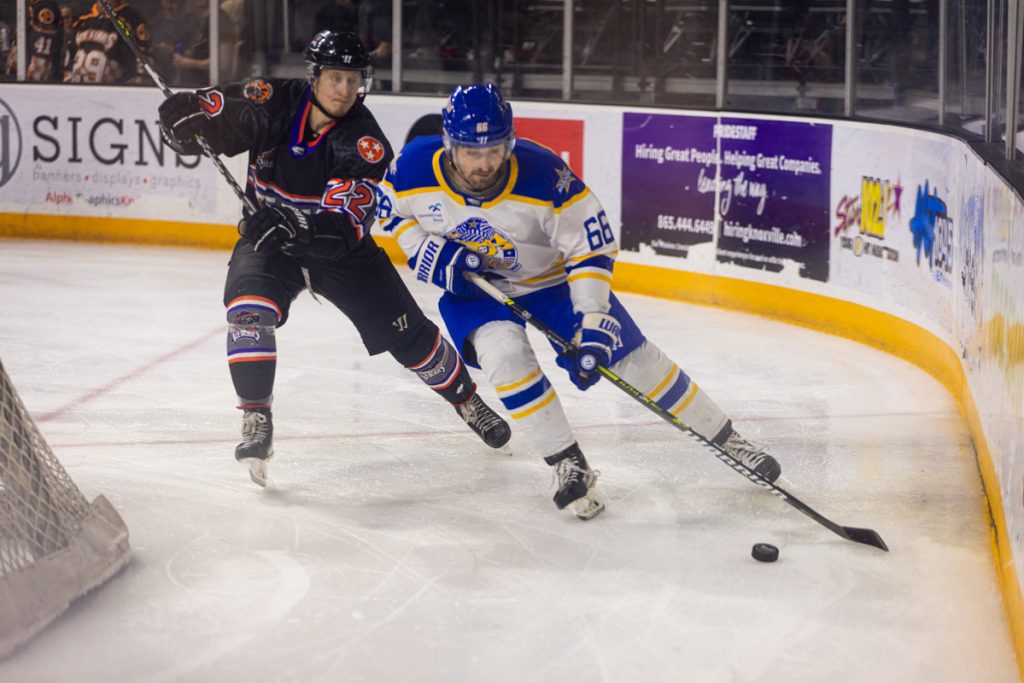 With three and a half minutes remaining, Roanoke pulled the goaltender to try and get back into the game. Timofeyev was able to get his second of the night on the empty-net goal, and it was a four-goal lead for the Ice Bears. Roanoke pulled Bernard again, and with 2:25 remaining, Mac Jansen skated across the circles and sent a beautiful wrist shot past Poreda’s glove hand.

The Rail Yard Dawgs looked to pull Bernard once more, but Timofeyev was moving quickly down the ice with his eyes on another empty net. Nick Ford took Timofeyev down to prevent the goal, but that meant the Dawgs would be shorthanded for the remainder of the game. When the final horn sounded, it was Knoxville taking game one in this series.

Up next for the Roanoke and Knoxville in this best of three series is a trip to the Berglund Center for game two. Roanoke will look to stave off elimination in front of their home crowd and force a game three back in Knoxville on Sunday.