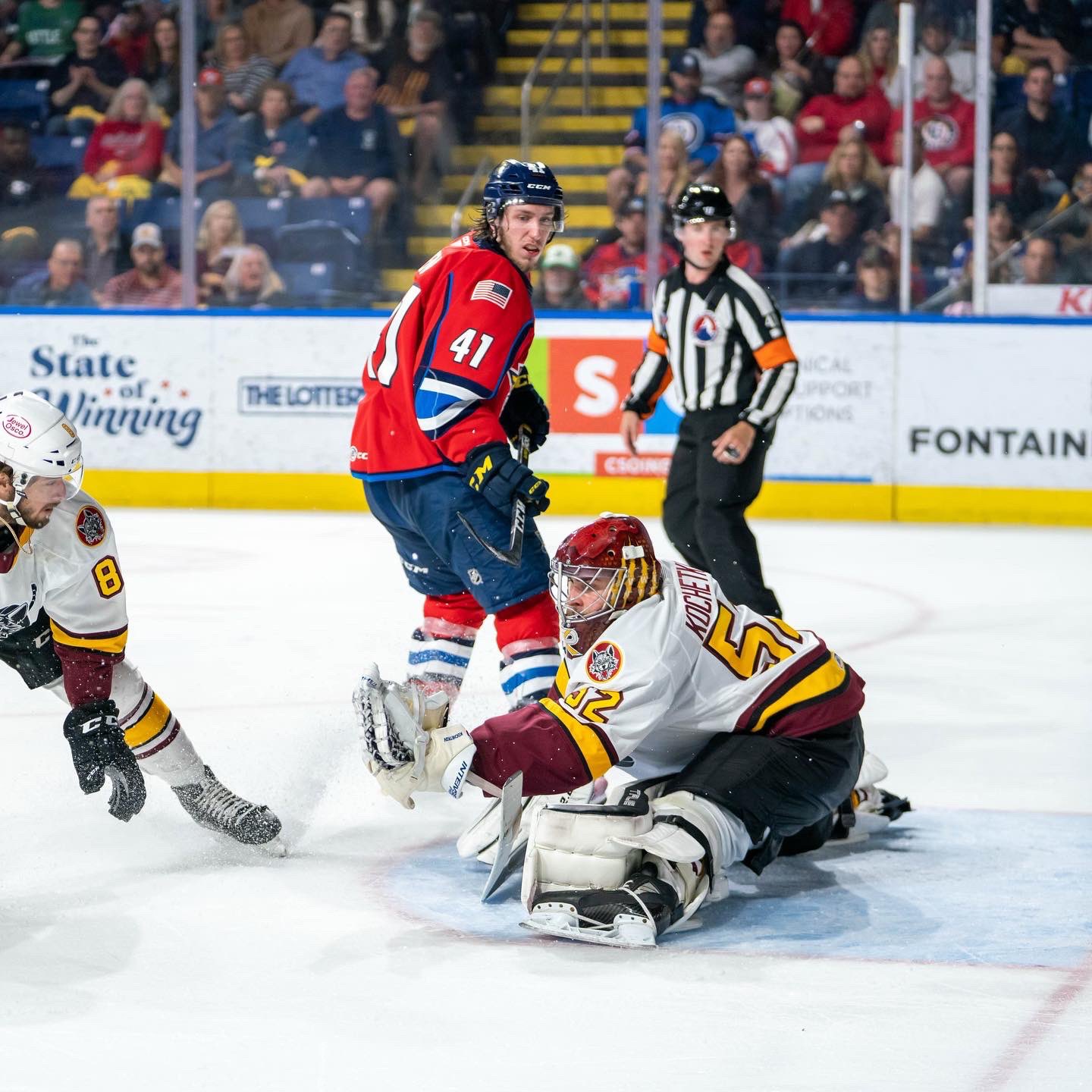 Pyotr Kochetkov makes a glove save on Will Bitten. Photo Courtesy: Chicago Wolves

SPRINGFIELD, Mass. – After opening up the Calder Cup Finals in Chicago, the series turned to the MassMutual Center with the Chicago Wolves and Springfield Thunderbirds tied at one game apiece. Wednesday night’s game marked the first of a three-game set in the middle of the series, giving the Thunderbirds a chance to respond from Game 2’s blowout loss on home ice.

For the first time since the Central Division Finals against the Milwaukee Admirals, a goaltender for Chicago would start a second consecutive game. Rewarding the winning performance in Game 2, rookie Pyotr Kochetkov would get the start for the Wolves in Game 3. Opposite Kochetkov was Springfield’s veteran Charlie Lindgren returning to the crease.

Riding the steady play of their goaltender, the Wolves would stifle the Thunderbirds by the score of 4-0 to take a 2-1 lead in the Calder Cup Finals.

The opening minutes of Game 3 felt a lot like the opening game of a typical playoff series for these two teams – after six minutes of play, only three low-quality shots were registered by both sides. There was definitely a feeling-out process from both sides, as if they were tentative about making that first mistake in front of the fans in the Thunderdome.

The first chance to strike on special teams came at 14:06 of the period, where a scrum in front of the benches between Tommy Cross and Andrew Poturalski saw both players sitting, with a little extra aggression from Dakota Joshua putting the Wolves on the power play. After getting the puck in deep into the zone, Josh Leivo sent it out front to Richard Panik, and after a fortuitous bounce off the defender was able to snap a shot past Lindgren for the icebreaker on the man advantage. The goal marked Panik’s 5th goal in the last 7 games.

Springfield responded on the next shift with a lengthy sequence in the offensive zone, drawing a hooking call on Jesper Sellgren and going to work with their own man advantage. However, the Wolves’ penalty killing kept most of the high danger chances away from Kochetkov and cleared the lanes for their goaltender to see any shot coming his way. The teams went into intermission tied in shots at 11-11, with Panik’s goal on the PP being the difference maker after one.

Springfield again opened up with intent in the Wolves’ zone, attacking on the forecheck to get in after pucks along the boards and open up opportunities for forwards out in front of the net. With David Gust in the box early on the Thunderbirds had another chance to strike on the powerplay but again couldn’t find a way to crack through Chicago’s elite penalty killing.

Their failure to convert on the advantage would prove costly – Chicago attacked the zone just a few minutes after the kill with Vasili Ponomarev looking for Ivan Lodnia in the slot. A second attempt on a beautiful feed found Lodnia and the one timer beat Lindgren for the insurance 2-0 goal at 6:25 of the 2nd. Lodnia scored from nearly the identical spot in Game 6 against the Stockton Heat and was his 4th tally in 9 postseason games.

Chicago would strike after another killed penalty. Leivo at the Springfield blue line found Jalen Chatfield streaking through the zone, getting in between three defenders with speed and fooling Lindgren with his quick release over the glove and into the net to make this 3-0 in favor of the Wolves. After their latest chance on the powerplay came up empty and with that goal going the other way, the atmosphere in MassMutual Center was officially deflated – with some boos coming from frustrated home fans to follow the goal.

Leivo finds Jalen Chatfield attacking with speed and what a shot to give Chicago a 3 goal lead in Game 3 pic.twitter.com/8jw74LxFrw

With a three-goal lead, Chicago was firmly in the driver’s seat as the game turned over into the second intermission with the Thunderbirds still figuring how to crack Kochetkov in net. With 25 shots and no goals, frustration was certain to mount unless they could respond.

The first half of the period was – at least for the fans – rather boring. The shots were kept at a minimum. The quality of shots that were there weren’t excellent. Chicago was beating Springfield to pucks in their own and end and getting quick outs to limit the danger against. On the road in the playoffs, it was the perfect recipe for success. The Wolves kept the crowd out of the game and didn’t give them a chance to give their opponent life.

Will Bitten had the best chance for Springfield on a break in all alone but Kochetkov made his best save of the night with his glove, remaining dialed in all night despite the traffic that the Thunderbirds threw his way.

Springfield never threatened much after that chance. Joshua sat in the box for a cross-check with just 4 minutes left and Stefan Noesen would seal this one with an empty net goal to put the Wolves up 4-0. Kochetkov would turn away the pucks coming at him from then on out and turn in his second shutout of these playoffs to hold up that 4-0 score as the final from MassMutual Center, giving the Wolves a 2-1 lead and taking back home ice advantage.

Game 4 is back at MassMutual Center on Friday, June 24th at 7:05 PM EST. Game 5 follows on Saturday at the same time, same place.