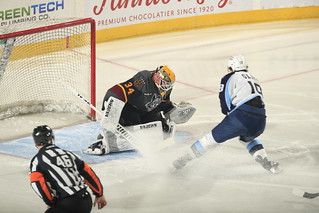 One month ago, the Chicago Wolves were signing goaltenders to PTOs. A month later, the Wolves have an embarrassment of riches in net. What’s a team to do?

ROSEMONT, Ill. – A month ago, the Chicago Wolves were in a situation where, due to call-ups, injuries, and COVID-19 protocols, they found themselves having to scramble for goaltenders on PTOs just to ice a team. Fast forward to February, and the Wolves find themselves with another problem in net – they may have the unique situation of having too many goaltenders.

Tuesday, the Carolina Hurricanes assigned Pyotr Kochetkov to the Wolves, giving the roster four capable goalies at the AHL level when healthy (currently, Eetu Mäkiniemi remains sidelined with an injury). With veteran Alex Lyon and newcomer Jack LaFontaine guarding the nets for the Central Division leaders, the crease is starting to get a bit cramped in Chicago. In a roller coaster of a season, the Wolves will have to juggle these capable goaltenders around to keep everyone fresh and focused while holding onto their lead in the division as the second half of the season opens up the playoff push.

What can the Wolves expect to see from their netminders? Can any of them reasonably set themselves apart from the pack?

First off – who is this new goalie coming over from Russia? Wolves and Hurricanes fans may have heard his name back in 2019, when he was selected in the second round, 36th overall by Carolina. Kochetkov also represented Russia’s junior team in 2019’s World Junior Championship, where he put up a 4-1 record and a .953 save percentage in a bronze medal effort.

In his first full season in the KHL this year, Kochetkov put in a 10-10-2 record with Nizhny Novgorod with a .926 save percentage – good enough for top 10 billing in the KHL. Considering the draft capital that Carolina invested in selecting him and the body of work that Kochetkov has put in at both the junior and professional levels in Russia, it should be no surprise why the Hurricanes organization covets this blue-chip prospect as their future franchise goalie.

Numbers aside, Kochetkov’s body of work proves itself on the ice. In terms of raw talent, he’s got perhaps the most significant upside of the four goaltenders in the Wolves’ crease. Kochetkov plays an incredibly aggressive style, coming out of his crease to challenge shooters and forcing them to either try and thread a needle in his equipment or get him moving side to side, where his athleticism puts Kochetkov to the advantage. He tracks the puck through traffic exceptionally well, and his side-to-side movement means Kochetkov is never out of the play, impressing several bewildered KHL snipers with agile precision. While Kochetkov prefers to play to his size, positioning, and cutting the angles down, he’s more than capable of making the acrobatic saves in desperation.

While his ceiling may be the highest, the Wolves are ready to win in the here and now. Kotchetkov’s style and ability should translate from the KHL over to the AHL, but will he have enough room to settle into a rhythm and push out the incumbents? The biggest obstacle against him won’t be AHL snipers or a culture barrier, but an established roster that will battle him for starts every game on the schedule. Maybe the added pressure will have Kotchetkov step his game up in order to separate himself, but where all the other names on this list have the records, Kotchetkov only has the tape to forecast where he’ll end up by season’s end.

Lyon began the season as the opening night starter for the Wolves, and little about his play can be said to push him away from the spot he’s planted himself in since October. With a 12-6-2 record and an AHL top five 2.26 goals against average, Lyon has established himself as one of the top goalies in the league with his excellent play in net. His three shutouts in the span of his 21 starts tie him for second best in the league as well.

Lyon’s best attribute is precisely what the other three rookies lack – experience in this league and the NHL. The veteran of the group, Lyon is always composed in his net as the pressure mounts, and this poise will be looked upon as the push to the postseason intensifies.

Alex Lyon with a shutout!!!

Ironically, this may also be his biggest drawback to staying in the lineup. Lyon’s veteran presence with prior service in the NHL makes him a perfect candidate for a call-up. With previous injuries and protocols affecting the Hurricanes earlier in the year, Lyon’s had his fair share of opportunities to suit up in a Carolina sweater. If ever the health of Frederik Andersen or Antti Raanta are in question, Lyon will be the first to get the call. If two of the other three names on this list are reasonably on fire by the time Lyon returns to Chicago, will there be any room left for him?

Mäkiniemi burst onto the scene in October and hasn’t looked back. A fourth-round pick in 2017, Mäkiniemi’s play in his short time with the Wolves has been nothing short of incredible, and the numbers will back him up. In his first season in North America, the Finnish netminder has put up an 11-2-1 record with an AHL best 2.06 GAA, and a top-five save percentage of .922 – along with the most All-Star votes from fans for Field Pass Hockey’s AHL All-Star Team.

Perhaps most impressive about Mäkiniemi’s game is his composure for a young goaltender – he’s square to shooters and doesn’t yield a heavy volume of dangerous rebounds (which was an issue early in the season but has been corrected). He makes difficult saves with his glove look routine and doesn’t get rattled when a goal or two get past him. He also has the athleticism to make the ridiculous highlight reel saves and – again – makes them look easy.

Unfortunately, Mäkiniemi hasn’t suited up for the Wolves since December 17, where he recorded a shutout against the Milwaukee Admirals for his sixth consecutive victory. Despite a stellar record and top stats in the league, he’s going to find himself having to battle for starts upon his return. Will he be the same goalie that he was pre-injury? Depending on how the cards fall in front of him, he might find himself in a hypothetical situation like Lyon where some of the other hands are playing too hot to shuffle the deck. With guys like Mäkiniemi that find their rhythm with more playing time, the crowded crease could hinder his game.

LaFontaine is the current wild card in the Wolves’ system. Last year’s Mike Richter Award winner, the best goalie in the NCAA, cut his final season in Minnesota short as the Hurricanes dealt with their emergency in goaltending depth by signing the promising netminder. In six games, LaFontaine has posted a 1-0-3 record with a 2.31 GAA, and an .875 save percentage.

These are promising early numbers for a goalie that has the pedigree and talent to succeed at this level. The upside is there with his imposing frame that takes up half the net, but the need for reps to develop and fill out that frame is a question that continues to face him as more and more names are piled into the ranks.

If he finds no room with the Wolves, perhaps a move to the ECHL’s Norfolk Admirals may be in play just so he can see the ice, develop his game, and step into the offseason with the intention of competing for the starter’s net in October. Such a scenario could be a tough pill for LaFontaine to swallow.

LaFontaine’s a gamer. He’s battled and won at all levels and will do what it takes to separate himself from the pack. But with a rough early showing and so much star power ahead of him, it’s hard to see him breaking through in the spring.

This is legitimately impossible to predict what will happen between now and when the playoffs start in April. There is so much time and talent in the crease that the Wolves are stuck in a situation where, unfortunately, someone will have to sit on the sidelines.

If this writer is forced to pick, it’s hard to deny Eetu Mäkiniemi the starter’s crease when healthy, and by the time the playoffs start, I think Pyotr Kochetkov will have shown the Wolves that the hype is real and he’s ready to ascend to the big time.