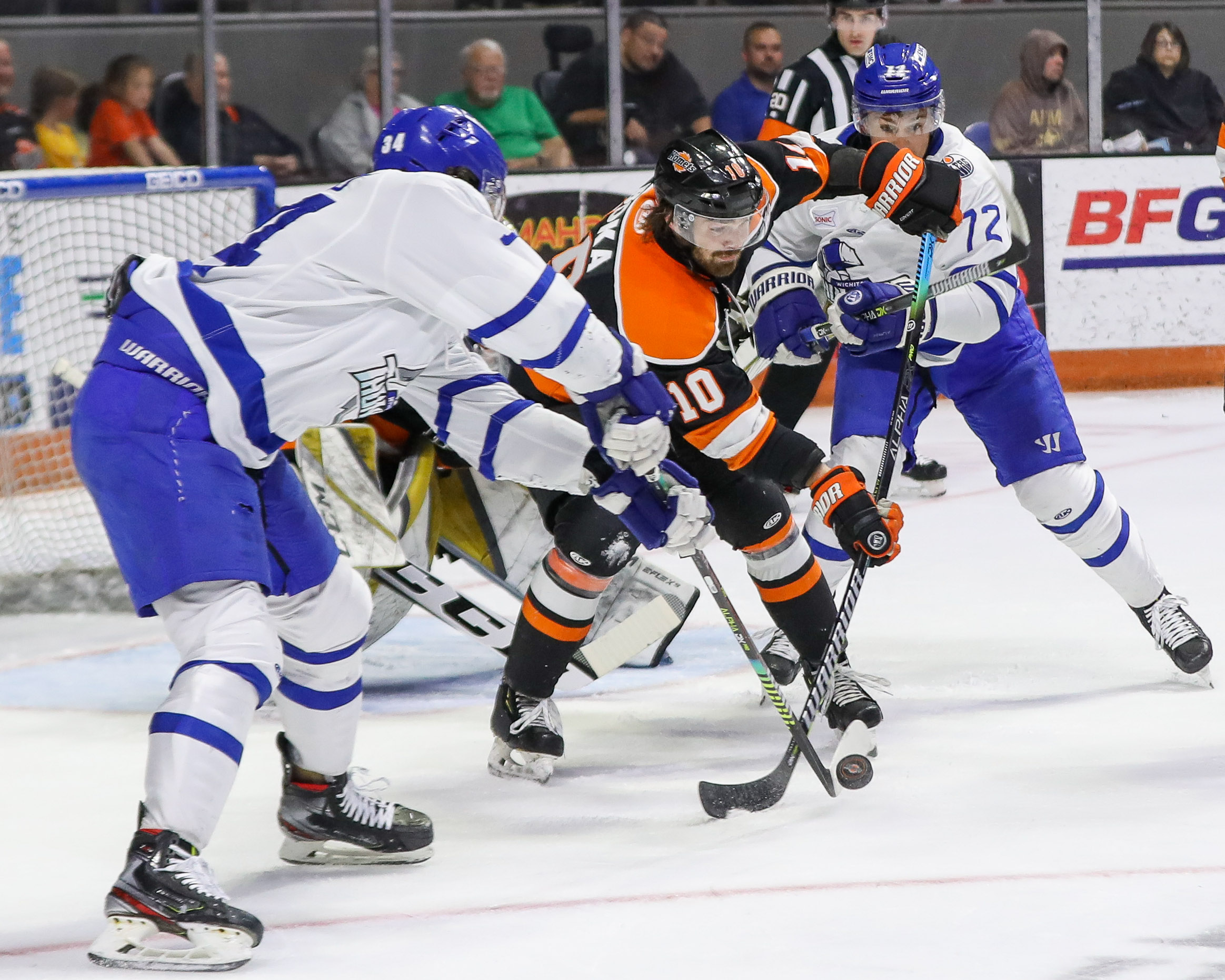 Komets Use Two Controversial Goals to Put Thunder on Ropes

Komets Use Two Controversial Goals to Put Thunder on Ropes

WICHITA, Kan. – The Western Conference Semifinal between Wichita and Fort Wayne shifted to northeast Indiana Friday night, where home continued to be good to the Komets.

They took advantage of two controversial goals and an impressive penalty kill to take game three of the series by the score of 3-0. The win for the Komets gives them a 2-1 series advantage and sets up a must-win game for the Thunder on Saturday night.

Wichita came out and seemed to carry over the momentum they had on Wednesday night in the first eight minutes of the game, putting several high-quality chances – seven in all – onto Komets netminder Dylan Ferguson, who was up to the task. After weathering the storm, the Komets began to assert themselves physically in the back half of the first period, something the Thunder didn’t have an answer for. The end result was the Komets outshooting the Thunder by a 12-0 margin in the last 12 minutes of the period. Thunder netminder, Evan Buitenhuis, stood tall for the team, and the two sides went into the first intermission with no score on the board.

The Komets continued to apply pressure in the early stages of the second period, outshooting the Thunder at one point by a 6-0 margin. The dam broke at the 9:27 mark of the period, when A.J. Jenks scored this controversial goal, which was reviewed and upheld.

The goal seemed to take the wind out of the Thunder’s sails. Not even a minute later, Stephen Harper scored the second controversial goal of the night for Fort Wayne, which would also be upheld.

Throughout the game, the Komets kept giving the Thunder chances to get back into the contest, however, the Thunder were not able to convert on any of the chances, going 0-for-6 on the man-advantage, including a 5-on-3 that spanned the last minute of the second period into the beginning of the third period. The Thunder power play didn’t look good on any chance they had tonight.

The Komets added an insurance goal at 7:50 of the third as Brandon Hawkins fired a shot from the right circle past Buitenhuis to make it 3-0.

Ferguson held off a late rally and grabbed the shutout victory. For Fort Wayne, it was their first playoff shutout since Pat Nagle completed the feat against Cincinnati on April 27, 2016.

Additionally, The Komets improve to 11-0 at home on Friday nights this season.

For Wichita, this is their fourth straight road loss, something that happened one other time this season (4/24, 4/30-5/2).

If the Thunder wish to continue playing, they have to win game four tomorrow night. The action gets started with me & Matthew Will on The Sin Bin Pregame Show, beginning at 5:50 pm, with faceoff coming at 6:30 pm CT.