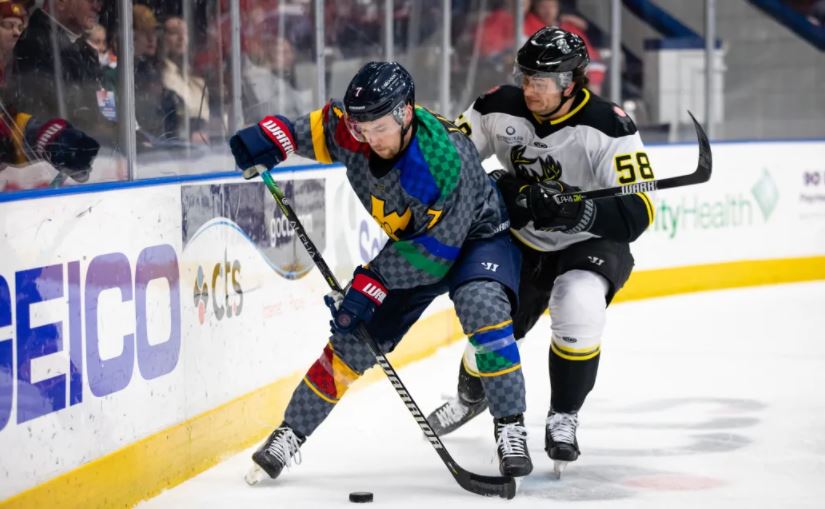 With the victory, Kozlowski moved to 8-10-2, lowering his goal against average to 3.51

KALAMAZOO, Mich. – Trevin Kozlowski stopped 30 shots to help lead the Iowa Heartlanders past the Kalamazoo Wings on Saturday, 5-2. Ryan Kuffner and Kris Bennett each scored a goal and added an assist for the Heartlanders, who defeated the Wings for the second straight night by identical 5-2 scores. Iowa extended their winning streak to three straight games.

This was a scoreless contest through the first 13 minutes, but Iowa jumped out to a 2-0 lead, scoring a pair of goals less than three minutes apart. The first goal came at 13:10 when Bennett scored his 19th goal of the year. Kuffner passed the puck to Bennett at the right faceoff circle, who fired a one-timer by Kalamazoo netminder Jason Pawloski. For Kuffner, the assist gave him points in 13 straight games, a team record.

Just before the 16-minute mark, Riese Zmolek extended the lead to two. With the Heartlanders on the power-play. Iowa was moving the puck inside the Kalamazoo end. Yuki Miura passed the puck to Zmolek near the slot, who lifted a shot by Pawloski for his third goal of the season.

The Heartlanders carried the two-goal lead into the first intermission and extended it to three when Ben Sokay scored his seventh goal of the year just before the five-minute of the second. Jake Smith took a shot that Pawloski saved, but Sokay scooped up the rebound, putting it in to make it 3-0.

Iowa looked like they were in complete control, but the Wings responded with a pair of goals to pull within one. Erik Bradford scored for the second straight night just after the six-minute mark. Tanner Sorenson dumped the puck into the corner where Logan Lambdin outraced an Iowa player for the puck, gaining control before feeding it to Bradford. He battled through toward the net before lifting a shot that found the upper corner for his 12th goal of the season.

With just over eight minutes left in the period, the three combined for Kalamazoo once again, this time with Lambdin scoring. Bradford passed the puck to Lambdin in the right faceoff circle, who blasted a one-timer by Kozlowski for his 19th goal of the year.

Kalamazoo was suddenly back in the game, but Adrien Beraldo shut the door with his fourth goal of the year to extend the lead back to two. With 5:15 left in the frame, Bennett moved the puck back to Beraldo at the point, who fired a slapshot that deflected off a Wings player and past Pawloski to make it 4-2.

Kalamazoo had dominated the second period, outshooting Iowa 14-6 in the frame, and continued to do so in the third as they put 11 shots on net to just five for the Heartlanders. However, it would be Iowa that scored the lone goal of the period. Kuffner stole the puck and quickly put a wrist shot past the Wings netminder for his eighth goal of the season. That made it 5-2 which was the final.

With the victory, Kozlowski moved to 8-10-2, lowering his goal against average to 3.51. Kuffner now has 20 points during the 13-game point streak.

The Iowa Heartlanders (20-23-7) moved into sixth place in the Central Division with the victory. They will welcome the Wichita Thunder (22-21-7) on Wednesday. The puck drops at 7:00.